I'm off to Gencon in a couple of days after taking a couple of years off.  I don't have a rigidly structured agenda; a friend registered us for a bunch of roleplaying games, and I'm sure I'll get into one or two M:TG (Magic) tournaments with my buddy the Magic player.  We'll have 8+ dads and kids out there, so there will be plenty to do.  One of the things I'm going to check out in the expo area is the "Flat Plastic Miniatures" (FPM) booth.

I got out of collecting miniatures several years ago, and was using wooden blocks when we needed to use a grid vs "theater of the mind" style resolution.  I imagine other DM's are the same - based on the tactical complexity, and the amount of preparation that went into it, we'll decide on the spot whether to run combat on the grid or without miniatures.  I do mix both styles.

I discovered Flat Plastic Miniatures early this year and they've worked well.  Here's a shot from a recent game on how they look on the table: 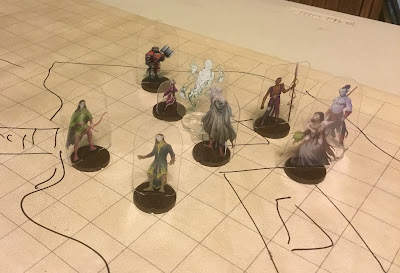 They feature hand drawn artwork, laser printed onto thin plastic, and inserted into a plastic base.  The pieces feel way more durable than paper or cardboard, and they're a fraction of the cost of 3-D pre-painted miniatures (like the WOTC or Wizkids offerings).  FPM might end up $.25 to $.33 per figure, while the (admittedly) beautiful official Wizkids pieces are $3-$4 per figure.  So FPM is way more budget friendly (although not nearly as friendly as wooden blocks).  When all is said and done, I'll probably spend a few hundred dollars to get a gigantic mini collection with the flat minis, whereas an equivalent collection of painted figures would be minimum several thousand dollars (and, you know, a divorce).

I also like that Flat Plastic Minis are easy to store - I've got several hundred figures in the binder pictured below: 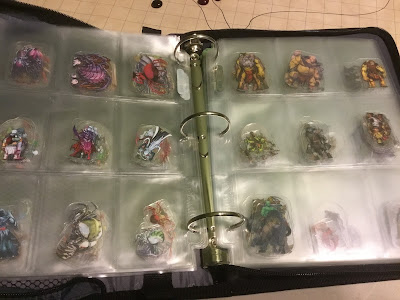 You can get this type of zippered binder at an office supply store.  Since the figures can easily slide out of the binder if it tilts upside down (a mini apocalypse), a zippered binder ensures you're not going to lose anything.  The sleeves are card sleeves, available at a game store or baseball card shop.  At some point the organization compulsion will take me over, and I'll put little label stickers on the sleeves to make it super organized.

Visiting the Flat Plastic Miniatures booth at Gencon is one of my Gencon goals.  They have a ton of sets I don't own, and maybe they'll have some Gencon deals?  I saw LOTFP will be there as well, and I'm sure I'll do a bunch of board game demos too.

Anyone else going, and what kind of stuff do you have planned?

PS:
Here's the link to the store for the guys that sell Flat Plastic Miniatures:  Arcknight.  The store doesn't seem completely up to date, as they've been doing various Kickstarters and so forth.  That's another reason I'm curious to see what's at their Gencon booth.
Posted by John Arendt at 9:31 AM 1 comment:

Rewards affect your decision making.  They increase your motivation to do things.  The psychologists use terms like operant conditioning, and the theories have been leveraged by video game designers to create rewards-frameworks to keep you plugged in and playing. Reward-based thinking doesn't feel as obvious in the table top space, but it depends on how transparent the reward system is to the players.

Players figure this out really quickly - even new folks.  Consider the old school "Dwimmermount" game I was running last year. After a particularly long Dwimmermount session, with lots of combats and encounters, the players eagerly waited to hear if their characters advanced in level.  "Um, no, not this time fellas - you really didn't find any treasure on this delve, and that's where most of the experience comes from."  Changes were made.  The group prioritized getting a 'Locate Object' spell, and they used it in dungeon areas they cleared to help find hidden caches of treasure that were missed.  They backtracked to previously cleared areas.  Treasure was prioritized over fighting.  The nature of the reward influenced their behavior.

Fifth Edition is all about the fighting, at least by the book; apparently the fine print in the DMG suggests using other forms of XP, but it's not featured the way combat XP is featured.  5E's experience system has complicated my plan to run a free-form exploratory sandbox, knowing that the players are going to prioritize fighting everything in sight because that's how they get their treats.  I was surprised this week to see the latest "Unearthed Arcana" article was about an alternative experience point model for 5E:  Three-Pillar Experience.

I like this alternative XP system quite a bit - it formalizes giving experience for exploring and winning important social encounters.  UA materials are playtest level stuff, not finished products, but it's a good start.  The rules suggest giving exploration experience for recovering items and finding special locations.  Pundits in the OSR have frequently proposed methods of rewarding exploration as an end in itself, and now we have a workable version for 5E.  (Good job Mearls.  That guy has a warm spot in his heart for the OSR).  The Three-Pillars also has guidelines for giving out social experience for achieving roleplaying goals in the game, like getting the support of an important patron or antagonist.  I don't remember seeing this pop up in our space much, although it's not unheard of for DM's to give out some XP for 'defeating' monsters through diplomacy or guile.  Of course there's XP for the combat stuff, too.

Compared to an actual old school rules system, this Three-Pillars Experience design still puts a heavier emphasis on combat versus exploration or social, but it's step in the right direction.  An entire game session focused on intrigue, or wandering the wilds looking for the Lost City, is still going to let the players improve their experience totals.

There's still an open question whether monkeying with the XP system will actually change what player's do?  The reward system needs to be transparent and create a link between the behavior and the reward.  I believe all it will take is a few examples of pointing out that the players have earned experience when they discover legendary or fabled places, or recovered fabulous items, and the value of exploration and looting will come to the foreground in your 5E game.  Since 5E is what my players are currently preferring, I like anything that brings 5E closer to the values we espouse running old school sandboxes and megadungeons.

The alternative XP approach for 5E is "milestone" or "story-based" leveling.  I struggle wrapping my head around that one.  What is the causal link between character behavior and reward if it's based on a DM's arbitrary story awards?  "Do what I want you to do, follow my plotted sequence, and I will reward you with levels?"  That sounds awful, so I'm thinking it can't be right - clearly I have some bias.  I took a look to see how folks responded to "Three-Pillar XP", and Reddit and Enworld are full of people loving on the milestone-based leveling and eschewing the very concept of experience points.  So if anyone wants to offer a cogent defense for arbitrary leveling (perhaps in the comments) I'd love to hear the other side; the obvious reason that jumps to my mind is that the DM/author doesn't have time to run a normal paced campaign, and story-leveling gives them cover to power-up the group and get them where he/she wants them (fast).  (Like in an adventure path type of campaign where page count matters, but everyone still needs to be level 10 for the boss fight).

Regardless of all that, I'm glad to see 5E's stewards continue to develop rules to support playing the game like the old days.  (We might be playing 5E, but we still use a caller and a mapper, too).  UA recently had a new initiative system that had elements of weapon speed and segments, and it felt like a regular throwback to AD&D 1E.  That one worked well at the table, too, so it's on my list to discuss.  I've also heard there are some upcoming rules to make 5E a little grittier, some kind of "hard mode" that will be featured in Tomb of Annihilation. 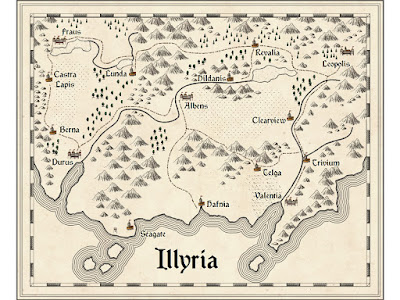