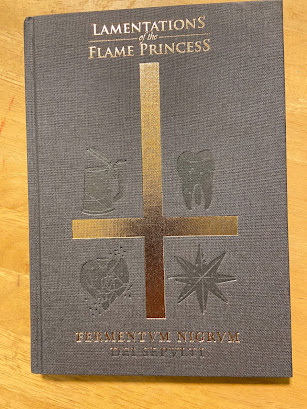 A strange stone, tumbling through the void of endless space and into the secret history of the world… the cursed legacy of a doomed witch’s family… a terrified abbot whose desperate plea has gone ignored by Rome… a vile conspiracy of whispers, visions, and delusions among drunken, stumbling brothers… and a black secret, black as the bubbling foam that gushes forth from the ale-barrels and the corpses of the fallen alike…

That's the evocative blurb from the dust jacket on LOTFP's recent book, Fermentum Nigrum Dei Sepulti (Black Yeast of the Buried God).  The adventure is site-based, and kicks off when the adventurers are staying at the inn near the monastery; an overnight massacre happens within the monastery walls as the monks devolve into armed conflict with each other, and fires break out in several buildings.  As the adventurers respond to the chaos, they get drawn into an unfolding horror, which ultimately leads them into exploring the catacombs beneath the monastery.  I should warn you, like any review there's the risk of spoilers if you are a player.

Fermentum is written by Gord Sellars, supported by some recognizable names on Team Raggi (Alex Mayo, Jacob Hurst, and Gonzalo Aeneas as the artist).  Like every LOTFP book I own, it's A5 sized, and the production values of Fermentum as an artifact are impressive.  It has a textured, foil cover (although it does look like on my purchased copy, the foiling didn't reach the bottom cover text.  Jim!).  The pages are heavy weight and feel good to touch, the spine is stitched, the layouts and text are all well done.  I look with dismay at my shelf of falling apart 5E books, broken spines and pages falling out, and wonder why a small publisher in Finland can figure this out but Hasbro's quality is trash?  These LOTFP books are meant to last.  Naturally, they are a little pricier than disposable mass published books.

I'd never heard of Gord Sellars; the wise Google indicates he is a professional writer and teacher, not a professional RPG author.  As such, he makes different choices than what you'd see in a traditional dungeon crawl.  (There have been a few cases where Jim Raggi went with non-traditional RPG writers for his books, they don't always work out, but Gord has done a great job with Fermentum).  There's a cinematic quality to the adventuring party exploring the devastated monastery, walking in the wake of the carnage, as the knowledge they gain ratchets the tension like a horror movie plot.  Furthermore, as the adventurers reveal the secrets of the monastery, they become embroiled in the mystery themselves - they become infected.  The central twist is the monastery is the site of an alien infection, and as the players piece together the horror that befell the monks, they risk falling victim themselves.  It's a spectacular premise for a horror story, and works equally well here in a site-based exploration adventure.  Incidentally, the monastery locale covers about 50-60 keyed areas (the above ground monastery and underground catacombs), some new monsters (the Garünger), a rival adventuring party, a couple of unique magic items, including a cursed grimoire, and new rules for managing the rising infection afflicting the characters.

I was intrigued by Fermentum because it revolves around a Medieval monastery, with brewing monks and a nearby tavern - the kind of locale you should be able to drop unobtrusively into almost any fantasy campaign (and certainly the early Medieval home brew, pun intended, I've been building out for myself).  LOTFP's adventures frequently take place in a pseudo-historical early 17th century milieu, but you could easily change place names and religious institutions to reskin this for a standard fantasy realm.  Furthermore, the monastery and nearby inn make an excellent locale to put into your sandbox early in a campaign, so it's a well-known and safe stopping point for your players.  This would create even more contrast with the terror during the night the monastery falls.

The book is written for the LOTFP rules.  It's been a while since we talked about them much here, since I've been running the 5E for my gang, but LOTFP is basically a customization of the old BX 1980's rules with stylistic updates.  You could run Fermentum with BX or similar old school rules sets.  In LOTFP, the spell lists are curated so magic is less flashy than core D&D (no fireballs or lightning bolts or raise dead).  It has a solid d6 skill system, an improved thief (the specialist), and strong niches for the core classes and demi-humans.  Stylistically, the LOTFP rules assume a setting like early modern earth, with a silver coin standard, and equipment you'd find in the 16th or 17th centuries, including simple one-shot firearms.  There's definitely a market niche for class-based adventuring rules (D&D style) but using adventures that deliver into horror and weirdness, borrowing from the Call of Cthulhu color palette.  LOTFP fits that niche well and this is an adventure that hits the right notes of D&D style exploration, lots of opportunities for roleplaying and combat, and mounting dread.

If you can't tell, I enjoyed the book a lot and look forward to running it.  This is a great little horror-themed exploration and dungeon crawl, with escalating tension as the players hope to discover a resolution while facing rising infection and loss.  The beer and brewing theme is fantastic, and I can imagine unnerving the players with Guinesses or stouts all around as we sit down to play this one (except maybe sodas for the kids).  Cheers!  Salut!  (It's available here at the LOTFP web store).

What Are Your Favorite Blog Posts?