I watched a bunch of horror movies this year in the lead up to Halloween.  It's far and away my favorite genre for cinema (besides super hero movies).  I love the anxiety, disorientation, and dread that a good horror movie generates, and then I get twice as much fun thinking about them as fodder for my game worlds and campaigns.  Win and win.

Here are good movies I took in this autumn with ideas to borrow and steal.  I'll try to avoid major spoilers for people that haven't seen them and just provide the gist.  5E has fundamental problems with horror, so these would primarily apply to Lamentations of the Flame Princess or Call of Cthulhu.

The Hole in the Ground
This one involved a single mom and her son, who move to the Irish countryside and live on the verge of an ancient and primeval forest; there's a giant crater deep in the woods - the erstwhile "hole in the ground".  When her son starts acting strangely, we're confronted with parental horror ("do we really know the loved ones in our life…") while exploring themes of changelings, faeries, and abductions.

The Endless
Two brothers escaped an "alien doomsday" cult in the California wilds, and return to the commune many years later from the outside world to resolve some unfinished emotions.  The people they left behind are remarkably healthy, hale, and youthful, but as they reconnect with childhood memories, they begin to learn there's a sinister secret.  This one had some Lovecraftian monster undertones.

Annihilation
Several years ago a meteor crashed into a remote area of the gulf shoreline.  The surrounding countryside has been engulfed by an ever-expanding  barrier of energy which scrambles signals and communications within the zone.  None of the military patrols that have explored the zone returned.  Natalie Portman stars as a scientist that joins the next research team to enter the area.  Annihilation was very cool; following the footsteps of other patrols, the scientists pick up clues left behind by other explorers through their video devices, and encounter bizarre and terrifying mutants.  This would make a great gaming scenario.

The Autopsy of Jane Doe
This one would be hard to do in a d20 game (where unconstrained murder hobos could shortcut the premise) but it might work in a modern horror game.  The unblemished corpse of a beautiful young woman is unearthed in the basement of a murder house; without any obvious causes of death, the police bring her to the medical examiner's for an autopsy.  The coroners are a father and son whose lab is in a sub-basement below their mortuary.  As a terrible storm blows in above ground, knocking out communications and isolating the coroners out in the country, they begin to make terrible discoveries about Jane Doe during the autopsy.  It's atmospheric and creepy.

Midsommar
The director of Hereditary returned with this one, about a handful of college students who travel to Sweden with their friend to spend a few weeks enjoying his rural village's summer festival.  The traditions of the Swedish pagans take a sinister turn as the Americans spend more time in the remote commune, reminiscent of earlier films like The Wicker Man.  This one is artsy, disturbing and revolting, a visually stunning slow burner.  You could model a remote pagan game cult after the fictional villagers in this movie.

The Silence
Soon after A Quiet Place, there was Bird Box and then The Silence.  The Silence wasn't nearly as well done as A Quiet Place, which I'd recommend to anyone, but the premise seems easy to port into a game.  Subterranean explorers (spelunkers) break into an expansive sealed cave system (basically the Underdark) and unleash flying, swarming, primordial horrors onto the surface world, which quickly infests the countryside and spreads outward.

The Ruins
This one is a little older, but it was streaming and my high-school aged daughter wanted to catch a horror movie so we queued this one up.  A group of vacationing college students head out to an archaeological dig site (a Mayan style ziggurat in a jungle clearing) and not only do they get trapped on the ruin, the ruins hold a sinister secret.  Imminently portable to a game setting.

I saw more horror movies this autumn, but the ones above are the films I most want to incorporate into scenarios.  Other ones I'd recommend for simple viewing include Green Room, Train to Busan, Us, and It Comes at Night; I also saw Under the Shadow, Suspiria (the new one), Veronica, Bone Tomahawk, Emilie, Cam, Ginger Snaps, Frailty, and Typewriter - this last set were either mixed quality or limited game-ability.  Although playing a Paladin like the characters in Frailty would be challenging.
Posted by John Arendt at 10:50 AM 3 comments: 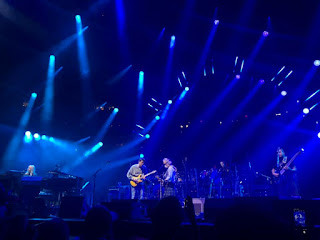