The Tale that Launched a Thousand Games 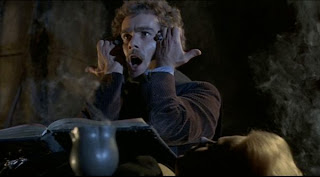 Ah, Dunwich Horror; how I love thee and... don't always love thee as much as I used to.  As a younger person, this was one of my favorite Lovecraft tales; the older I get, the less I idolize this particular story, but the more I respect the long shadow it has cast on thirty-something years of gaming.
The story is fairly simple (in gaming terms).  A cultist tries to steal a blasphemous tome from the restricted section of the local university library, but is killed by the guard dog.  The stalwart librarian perceives the risk (because he's familiar with the incantations and rituals that were the cultist's goal) and he also decrypts the cultist's diary, revealing much of the back story.  Meanwhile, with the cultist dead, there is no one back home feeding his monstrous half-brother; the half-brother breaks out of containment, rampaging across the countryside and destroying farms and livestock.  Entire families are consumed.  Armed with mind-blasting incantations and spells, the librarian and some heroic professors sojourn to the beleaguered village deep in the backwoods, confront the monster on a stormy hilltop, and send it back.
As an introduction to the Cthulhu Mythos, the Dunwich Horror is brilliant.  You've got all these juicy elements - the Necronomicon - the Dee edition, Wormius' Latin Edition; you have quotes from the Necronomicon, you have a cultist's diary written in cypher and Aklo, you have wizardry and sorcery, possibly the first mention of Yog-Sothoth, and humans mating with things from elsewhere and giving birth to half-human monsters.  It's golden.  So what's the problem?
The good guys win!
Cosmic horror is bleak.  There is no victory against the Mythos.  Most Lovecraftian tales end with the protagonist dead, waiting for death, insane, or worse.  Very few take this pulp action approach.  But the Dunwich Horror defined the Call of Cthulhu game experience; antiquarian characters, skilled with ancient languages and bookish skills, perceive a threat beyond the ken of ordinary folk, risk health and sanity learning the secrets of the Mythos, and somehow save the world by driving the monster off.
That being said, lately I've seen a change in Cthulhu gaming; there's a deeper appreciation for the sense of horror that comes from bleak inevitability.  Tastes are trending towards The Colour Out of Space instead of The Dunwich Horror.  More writers are opting for one-shot adventures (no one here gets out alive!) and the players understand going in that they are characters in a game that is emulating horror fiction, instead of the chosen heroes in a  pulp action story like The Dunwich Horror.  There's even a term for it - Purist vs Pulp styles of Cthulhu gaming.
Too often when we import elements of Weird Fiction or Lovecraftian horror into our Dungeons & Dragons games, we don't even take a Pulp Horror approach, we take a Pulp Adventure approach.  The squamous tentacled thing might have a tougher AC, a few more HD, a pernicious attack, but it's still a thing with game stats amenable to killing it, if you just have a big enough sword.  Screw that - it sucks - it does a disservice to the whole genre of Weird Fiction.
One of my goals for this blog - I'm still thinking out loud, mind you -is to migrate this 'Purist' mentality over D&D, to put an element of horror into some of my D&D games that can't be hacked or turned or blasted with a fireball or treated like a typical mook from the Monster Manual.  There is no victory against the Mythos, but it might be possible to survive.
This is foundational for some of the ideas to follow; to be continued.
Posted by John Arendt at 11:55 PM