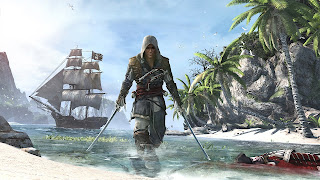 Sandbox games are fun.  I've really been enjoying logging onto the Xbox after the kids are asleep for the night, slipping into the world of 18th century pirates, and figuring out what I want to loot or explore that particular evening.  It's given me a lot of ideas that translate equally well into the tabletop RPG realm.

I had mostly resisted the clarion call of Skyrim, and religiously avoid the FPS games (first-person shooters like Halo and whatnot).  But when I saw that the latest Assassin's Creed game involved pirates, I was intrigued.  When I saw that the game included a giant pirate sandbox where you can sail around a faux Caribbean and listen to sea shanties while hunting ships, I was totally onboard.  This is probably the first video game I've played "seriously" in 12-13 years.

If you're not familiar with the series, you take on the role of a character that gets pulled into a shadowy , ages old conflict between "templars" and "assassins".  The templars seem to be an Illuminati-like conspiracy intent on finding ancient artifacts and ruling the world.  In AC4, the templars are among the colonial governors - men running institutions of power.  The assassins, with their credo of freedom ("nothing is true, everything is permitted") come across like murderous libertarians.  During the game, you sneakg around jungles and towns, hiding, climbing, using exotic weapons like blowguns, and sticking knives in the bad guys.  It's definitely on the violent side.

AC4 starts in 1715 and puts you right into the golden age of piracy.  All of the iconic figures of the time period - Ed Thatch, Charles Vane, Stede Bonnet, Woodes Rogers, Calico Jack, Benjamin Hornigold - they're all weaved into the storyline.  Fun stuff if you're a fan of the period.  There is a mission-based main storyline, where you travel from place to place, initiating each mission with a cut scene that advances an overarching plot.  That seems to be typical video game RPG fare.  The difference here is that the designers have surrounded the main story with a sprawling Caribbean sandbox - and you can take as much time as you like rampaging around the Caribbean until you like it's time to tackle the next chapter of the main story.

So what can you do in this sprawling, pirate sandbox?  You have a ship and a crew, and some personal armaments.  You can sail and find places to explore.  There are islands everywhere and Mayan ruins on most of the large ones - the map even extends to the Yucatan, allowing you to explore Tulum.  There are shipwrecks and undersea locations to explore (but inaccessible until you get a diving bell).  There are a handful of large settlements - Havana, Kingston Jamaica, and Nassau are the biggest - and lots of smaller towns, villages, smuggler dens, and pirate coves along the way.

Here are the various side tasks I've found myself planning and executing; exploring and clearing islands and ruins; diving the wrecks looking for "ship upgrade plans";  looking for cadavers, which carry treasure maps, to find locations that have buried treasure; hunting animals for craft goods, or harpooning sea animals for craft goods - you can hunt for rare black jaguars, or try to harpoon a great white shark; many of the settlements have guarded warehouses to plunder; there are assassination contracts and naval contracts for specific roguish missions; of course, there is sailing around and using the spyglass to look for ships on the horizon! 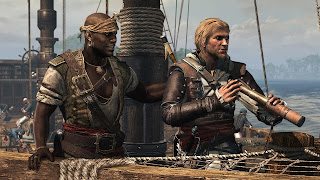 Naval combat is furious - you have chain shot, swivel guns, fire barrels, and different kinds of broadsides.  Ships can even use mortars, and rams - the game doesn't strive for realism.  The Caribbean map is concentrated, time elapses quickly while sailing, and there aren't merchant ships; the nationalities are basically Spanish and English war ships (carrying various trade goods or money), and other pirates.  This is no simulation.

Once an enemy ship is disabled in combat, your ship can grapple and board, making you swing over on lines and accomplish a number of tasks on the other ship to break morale - defeat a certain number of crew, defeat the captain or officers, sometimes climb the rigging and cut down the flag.  Hand to hand let's you block and parry with cutlasses and rapiers, and mix pistols and sword fighting fairly fluidly.  It's all fun, swashbuckling pirate kind of things.  At higher levels, raking the deck with the swivel gun is usually enough to quell the smaller ships without boarding.  There's a natural progression of difficulty, from gunboats and smaller schooners, up to military schooners, brigs, frigates, and finally man-o-war ships in the far south of the map.  It's set up very much like a tabletop RPG sandbox, where things get more dangerous the farther you go, forcing you to spend money on ship upgrades, and seek out the right kinds of cargoes and ship plans.  Many areas are controlled by forts, which need to be toppled to open the area up for exploration.  Finally, there's a whole campaign side-game where you can send captured ships to your own fleet, and undertake a world-wide network of missions versus the colonial powers by sending your fleet on missions around the colonies, Europe, and Africa.

So what are the kind of takeaways for your tabletop game?  The biggest one I'm experiencing is the affirmation of the "rogues in the sandbox" concept, which is that miscreants and scoundrels on the hunt for money find themselves in a target rich environment and get to be proactive.  In the case of the pirate sandbox, that means skulking around a British town like Kingston, plundering British warehouses, preying on British shipping (or Spanish) - all great fun when you're a pirate.  It lets you plan your targets and figure out how to take down a big haul.  Even failure is pretty thrilling, such as trying to escape a military compound after the alarm is sounded, or unfurling the sails and catching the wind because you couldn't take down a ship quick enough, and now a large man-o-war is bearing down on you.

We usually think of wilderness hex crawls as borderlands or the wilds, with exploration as the primary mode.  Getting a taste of the pirate life is making me see the possibilities in having a civilized (but enemy) sandbox, putting the players in that target rich environment.  If the sandbox describes a realm controlled by an evil power, the players get thrust into the role of insurgents or partisans - very much a Robin Hood style of game.  A similar approach could involve two warring powers with a tenuous border, giving the players the opportunity to sneak across the border, raid various wealthy targets, and whittle away the opposing side's territory by knocking out forts and outposts as a group of "irregulars".

I've mostly avoided sprawling, wilderness hex crawls because they've always seemed on the dull side to me, just a collection of lairs and random encounters.  Boxing with shadows.  Giving the players an actual adversary in the wilderness sandbox - whether it be a colonial power or an occupying force - is a way to let them don that roguish mantle, without running an 'evil-aligned' tabletop game - and they can trade blows with an adversary that's going to punch back once in a while.

Edit:  Rogues in the Sandbox:  I reflected on the way to work, there's no way to tell whether folks still reading the blog are old timers or newer additions.  Rogues in the sandbox is an old theory article written by Pornstar Zak a few years ago, breaking down how super heroes are reactive (waiting around for the villains to do something) whereas villains are proactive - and then he goes on to discuss how villains make such better characters in a sandbox game.  It's a fantastic read, very insightful, and encapsulates well the allure of being a pirate along the colonial frontier.  I assumed folks would know the reference, but then figured it'd be safe to include link nonetheless.
Posted by John Arendt at 6:59 AM