Bad weather and work assignments conspired this past weekend to ensure I had to skip the RPG (game 31 is delayed).  And an upcoming trip mean means we'll probably miss another game, too, so this report is going to have to satiate the Black City fans for a few weeks.  Luckily, there was plenty of action - and not the dice-rolling, monster stabbing action.  Adult entertainment!  Read on for the lurid details.

Last week ended with a hologram of Odin telling the players they'd be safe resting overnight in a control room the deity was protecting, but he left the players with an ominous warning… "the Fractious Night approaches".

The players mused if that meant they were going to have to do math (fractions), or whether computer fractals would assault them, or had I been reading too much Lewis Carroll ("O frabjous day! Callooh! Callay!")

Instead, they learned that a great evil would boil out of the foreboding northern tower and pour across a stone bridge, rampaging into the south part of the cavern.  One night a year, on the Fractious Night, the Morlocks pillage and despoil the southern half of the cavern.  The players fought some Morlocks in the upper dungeon and were familiar with their "human wave" battle tactics and ferocity - they didn't care for a rematch!

Odin also pointed out that the controllers in the deeper levels would be sending a replacement detachment of sentinels to take over the control room, stronger than the detachments the party had defeated previously, so the players couldn't stay there indefinitely.  The destruction of the stone walker, a gigantic golem-like guardian that protected the domed building, could open the dome up to Morlock attack.

Injured, depleted, and low on water, they could head for the surface, but instead chose to make their way to the kingdom of the cavemen, in the far south of the sprawling cavern.

The cavemen were in a state of agitation, and after resuming diplomatic ties with the Blue Lady (the cave man's living goddess, a powerful wizardess), the players observed a peculiar lottery ritual, where various Neanderthal women were selected by the goddess to join her in the palace.  They later learned the women would accompany the Blue Lady to the Otherworld where the gods live, and thus escape the Fractious Night.  Over dinner that evening, the players learned that one night each year, one of the Secret Masters from the dungeon depths arises out of a well of sacrifice, flies around the cavern on a sled-like apparatus, and whips the Morlocks into a frenzy of blood lust and rage with promises of gifts and sweets for the taking.  Soon the Morlocks would be pouring over the bridge bearing torches, to pillage and despoil the southern cavern - especially the caveman area.  I pictured them like those boogeymen from the wooden soldiers movie - the old black and white one with Laurel and Hardy.

Maybe if they were given more time, the players would have guided the conversation towards asking the Blue Lady why the Morlocks left the cave people alone the other 364 days of the year.  It would have been a good question.  Instead, they started to notice how there was no pain, they were receding - a distant ship smoke on the horizon - the Blue Lady was only coming through in waves… "Dammit, she slipped us a Micky!", cried Borghild.  "...And now she's doing some kind of spell."  Never trust Blue People, that's all I'm saying. 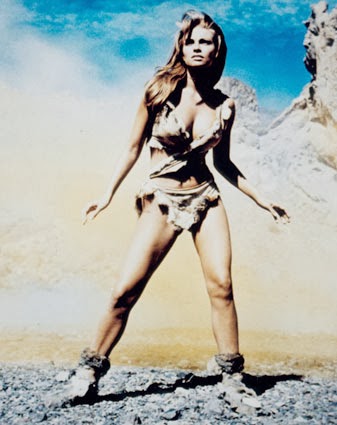 So while the characters struggled to keep their minds sharp, senses blurred by exotic narcotics, they were assaulted by sultry, dulcet musical tones, the smell of relaxing incense, and a harem full of beautiful women in wispy clothes descended upon them.  A few characters made their saving throws (the Halfing, and one of the Elves) - they were pretty horrified by the [ sanitized redacted described euphemistically ] proceedings that followed - but since the Lady's two gigantic Neanderthal warlords, Krag and Krog were on guard duty to make sure no one left the room, they played it cool.  Timur the Elf was like, "Not listening, not looking, this isn't happening".  But all the time, some of her foreshadowing words from previous conversations echoed in his mind… "The cavemen have such a limited gene pool, I have to carefully arrange marriages to maintain the species.  I've become quite a genealogist you know."  "If only I had access to more breeding stock and an infusion of new DNA".   "Through careful breeding, I've tried to make the cave men smarter, closer to humans".  "I'm so glad men from the surface have found us again, it's been many years since the Romans were here…"

Ben Underfoot, thinking quickly, avoided the guards with ninja-like Halfling stealth skills, snuck out of the room, and trailed the Blue Lady to a place beyond her private chambers, near her labs, that was kitted out like an underground bunker.  Beds, rations, water supplies, and heavy doors like a bank vault.  Runes and magic inscriptions made him think the door was probably wizard-locked or similar.  His Halfling stealth kept him from being discovered, and he watched as the Blue Lady dressed the room with illusion magic so that the bunker appeared to be the cave entrance to a verdant paradise - the Otherworld she had promised the cave ladies.  He ducked out of the way when a bunch of disheveled cave ladies came by a little later, entered the Blue Lady's Otherworld paradise, and closed the vault.

Let's give the players credit, they took these shenanigans in stride - har har, we got tricked into smooching hairy cave ladies, nice one DM.  All those characters that failed their saving throws got a 'carousing kicker' for getting a chance to forget the stresses of the adventuring life for a bit, with only a mild hangover for their troubles.  We'll see if Timur and Ben tell the others what really happened - otherwise the other characters are blissfully picturing Raquel Welch in the fur bikini.

The next day, the stoic Neanderthals (men and remaining women) were preparing defenses by the walls.  The players weren't sure what to make of the Blue Lady - is she a philanthropist trying to keep the Neanderthal race alive, or a skeevy manipulator?  Should they flee into the recesses of the cavern and leave the Neanderthals to their fate, or stay and fight, helping the cave men to defend the stockade?  The rest of the game session involved the players surveying the deployment of the cave men and their defenses, and figuring out how they could help tilt the coming battle in the Neanderthal's favor.  Good guys to the end, they’re staying and fighting, and they helped plan the defenses to protect the stockade.

A horn blew from the north tower.  A steady stream of orange lights could be seen in the blackness as an unending line of Morlocks bearing torches poured across the bridge to the far north.  If the players could understand cave man, they might have heard the guard say, "The glow worm approaches".

Next game should be pretty awesome, as we undertake the siege of the Cave Man kingdom.

DM Note:
Long term readers may know we game with some kids (sixth graders these days).  I did have them step out for a bit (video game time) during the cave lady romance sequence.  We kept things fairly oblique and clean, but I don't need a mom calling me,  "My son's character did what?  What kind of D&D game are you running over there?"  I think it was the first time I had to balance the content a bit and separate the group.  I look forward to hearing if anyone else has had anything analogous in a game!


*The picture is Raquel Welch from One Million Years BC - the gold standard for cave man fantasies since 1966.