Here's a technique I try whenever I find myself blocked or unable to solve a problem - just imagine how the person that's not you would approach the situation.  For instance, I've been considering how an old school megadungeon might look for 5e D&D.  So I approached the question another way -  how would a trendy designer working for one of the popular 3.x boutiques tackle a 5E megadungeon?

Taenarum 1.0 was an old school megadungeon I started working on last spring, for the kiddos and neighborhood players.  Taenarum is the legendary entrance to the Greek Underworld.  Hades, the god of wealth and the underworld, covets the souls of mortal heroes, and his undead minions created a sprawling maze that promised fantastic treasures and ready death.  We played Taenarum up until about Gencon, at which point the purchase of Icons (a superhero RPG) and a recent obsession with manga inspired me to run American Ninja Cowboys, our current super hero campaign.  Taenarum had a lot of good ideas, though, and the players never got too deep into the dungeon.

We’re still running Icons, although it's not going to be a long term campaign.  I'm behind on some game reports, in fact.  I can see a time within a few months when giant-sized Kaiju will stomp across post-apocalyptic America in the campaign finale.  When Icons wraps up, I'll have a 5E game ready to go.

Making peace with 5E from a campaign perspective came down to three tenets I'm going to try on for size - 'go small to go big', 'love the five-room dungeon', and 'needs more drow'.

In Order to Go Small, You Must First Go Big
A modern design isn't going to have pages and pages of graph paper, with rooms and passages filling every square of blank paper like those 1970's dungeons.  The modern megadungeon needs to big - so big you can't even graph it.  We're not dealing with squares any more - we're hexing it with the hex paper.  The road to the underworld in Taenarum 2.0 is going to be depicted as a meandering downward path on a hex map, leading to various spacious caverns and vaulted chambers the size of small wilderness areas, like the old Descent into the Depths of the Earth.  The new Taenarum has been biggered and bettered.

How I Will Learn To Love the 5-Room Dungeon
One of my other concerns has been the rate of advancement, and keeping the game moving along quickly without overbuilding the upper works with lots of rooms.  Taenarum 2.0 is going to have lots and lots of lairs - smallish dungeons without too many rooms, very modular and easy to plug in as necessary.  The 3.x crowd has been enamored with "five room dungeons" as a design concept, and that structure would work fine for lair creation and small dungeons.  I haven't been a fan of the five-room dungeon in the past, but I'll work on getting over it.

These two tenets together - a giant sprawling hex map, and lots of lairs and mini dungeons, seems like an interesting way to present a modern megadungeon.  I'm intrigued.

Need's More Drow (And Planescape Too)
I'm not a big fan of Drizz't.  I liked Erelhei-Cinlu and the 1970's introduction of the Drow - they had a decadent, opulent, sword & sorcery vibe.  Their hidden society was presented as a vice-ridden cesspool populated by pointy-eared Melniboneans.  Drizz't romanticized the villains and now the Drow are everywhere.  I haven't read the 5E adventures yet, but I'd hazard to guess there's a Drow villain in the Phandelver thing, in the Hoard of the Rise of Tiamat path, and probably in every book that Paizo still puts out (now I'm going to have go skim the 5E stuff, just for giggles).  All modern adventures need more Drow.  I'm going to put a whole Drow city in Taenarum.

Planar travel is a lot more accessible to modern characters too.  I  fondly remember Neil Gaiman's "Season of Mists" story arc on The Sandman, where all these extra planar and mythological entities come to the Dreamlands to barter for the key to Hell.  The afterlife is prime real estate!  With that in mind, I'm going to put a bunch of extra planar embassies in the depths of Taenarum, just outside the gates to the Underworld.  Everybody wants a piece of Hades.

In a rare burst of creativity, I quickly sketched a side view of Taenarum 2.0.  Check it out: 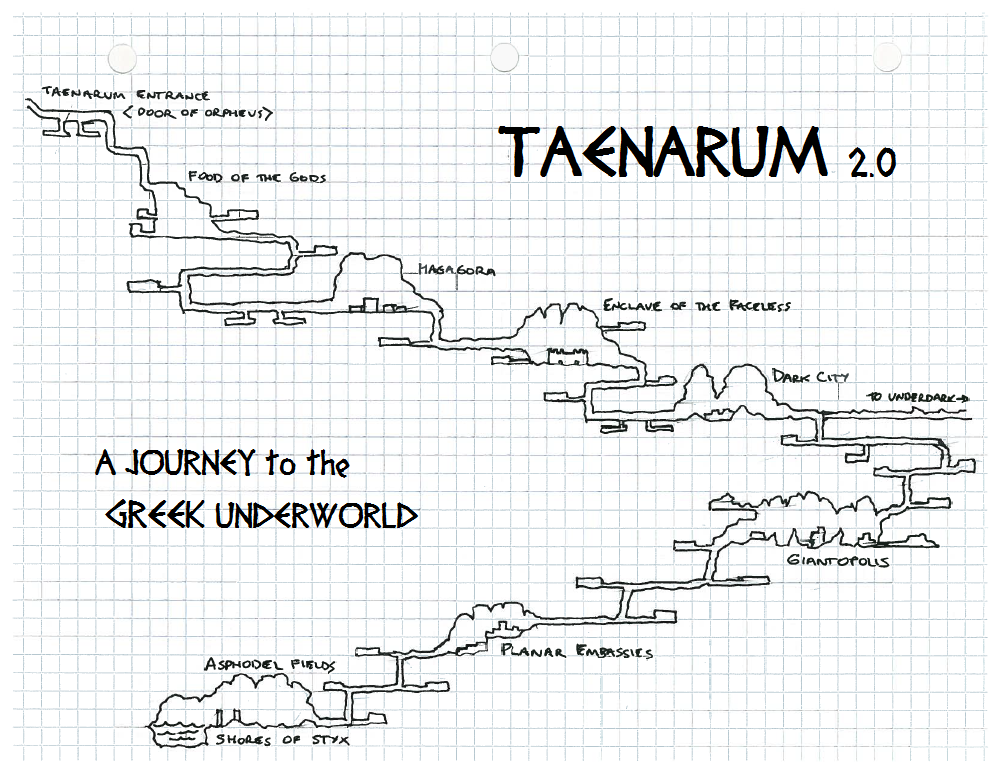 The Vaults
There are many set pieces, puzzles, and themes from Taenarum 1.0 that I can reuse for the 5E version as I build the lairs and mini dungeons.  The seven major vaults are each a destination, community, and potential base for  exploring the next leg of the journey.

Food of the Gods
The original Taenarum featured a fountain that mutated the surrounding fauna, leading to a chasm filled with giant bugs and lizards.  Seems like it can be ported almost directly.  Like its 1970's namesake, there was indeed a giant killer chicken, which amused me greatly.

Hagagora
Taenarum 1.0 had an underground market for various dark dwelling races to buy and sell exotic goods, like the troll market.  In Taenarum 2.0, it's the Hagagora.

Faceless Enclave
The Faceless are revenants that escape the underworld by swimming across the River Lethe, losing their memories and identity.  As undead, they can't return to the sunlight of the surface, so they've created their own refuge in the deeps.

Dark City
This is my place holder for the Drow City because, well, 'needs more Drow'.

Giantopolis
One of the themes of Taenarum is the imprisonment of the Titans, and the efforts of Kronos's minions to free or awaken them.  The giants opposed the gods during a primeval war called the Gigantomachy.

Planar Embassies
Once you're this deep into the underdark, it's not even clear you're still on the Prime Material Plane any longer.  I'm picturing a Casa Blanca style settlement on the outskirts of the Underworld with representatives (embassies) from various interplanar factions - a place for intrigue for high level characters.

Shores of Styx
Charon, Cerberus, the whole thing, as the very bottom of the dungeon.