Design Principles for a 5E Megadungeon

We're on the eve of kicking off my first foray into a 5E megadungeon and campaign, assuming weather complies and the players can make it over tomorrow with more snow in the forecast.  For this one, I've gone in a much different direction than the ways I've designed and built megadungeons in the past.

The Old Way
A fair amount of time in the OSR was spent looking backwards to the 70's and trying to recreate how Gary did it with famous campaigns like the dungeons of Castle Greyhawk.  The campaigns seemed gloriously fun and the return to the megadungeon sandbox style was a refreshing escape from scripted stories and DM as author.  I'm immensely grateful for all the tips, tricks, techniques as a member of the OSR movement.

However, the context for modern gaming is changing.  I'm finding that my adult gamers can't make every game session; we can't game 8 hours at a time; players want faster gratification and aren't interested in the skill-testing inherent in gigantic dungeon crawls.  Creating a sprawling dungeon level of 100+ rooms for each level of the megadungeon was fine from both sides of the table in the days before we had kids; I'm seeing that my approach needs to adapt to the realities of busy families and modern people with shifting schedules.  Plus, the table top is competing for mindspace with consoles, tablet games, online stuff, all sorts of competing media.  The RPG model needs to assume episodic attendance and shorter sessions - at least for me, and maybe you too.

Solutions
I tend not to give WOTC a lot of credit, but the idea of the "dungeon delve" as it was positioned in 4E (and maybe even late in 3.x) caught my attention while I've been pondering solutions.  Dungeon delves were short, self-contained scenarios consisting of a series of rooms and a few encounters, perfect for a single night and a pick up game.  They line up well with the modern context - intermittent attendance, pick up games, shorter sessions, faster character advancement.

How would I go about re-envisioning the megadungeon as a sprawling collection of loosely connected delves?

Here's a section of a top down view of Taenarum, complimenting the cross-section I posted a while ago. I'm not happy with this map, there's a long way to go, but it gives you the idea on what I'm thinking: 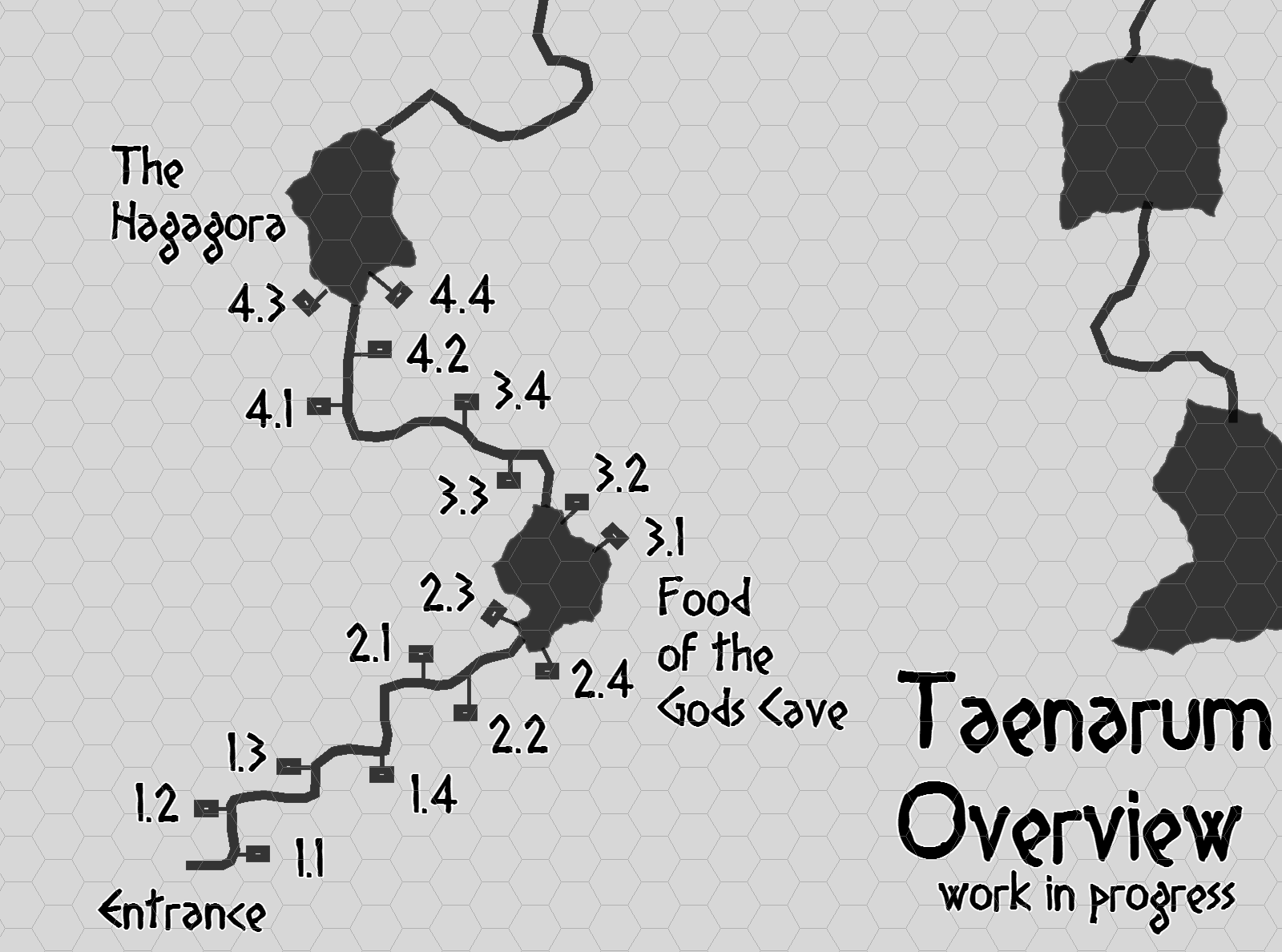 The overall structure of Taenarum is a large passage winding into the depths of the earth, the legendary road to the Underworld, crossing vast caverns and spaces.  I figure each hex is probably a quarter of a mile, so some of the caverns will be miles across - large enough to hold lakes, islands, even underground cities.  Along the way are countless rooms, nooks, side passages, tertiary halls, and entrances to mini dungeons.  Here's an example of what I mean by a mini dungeon: 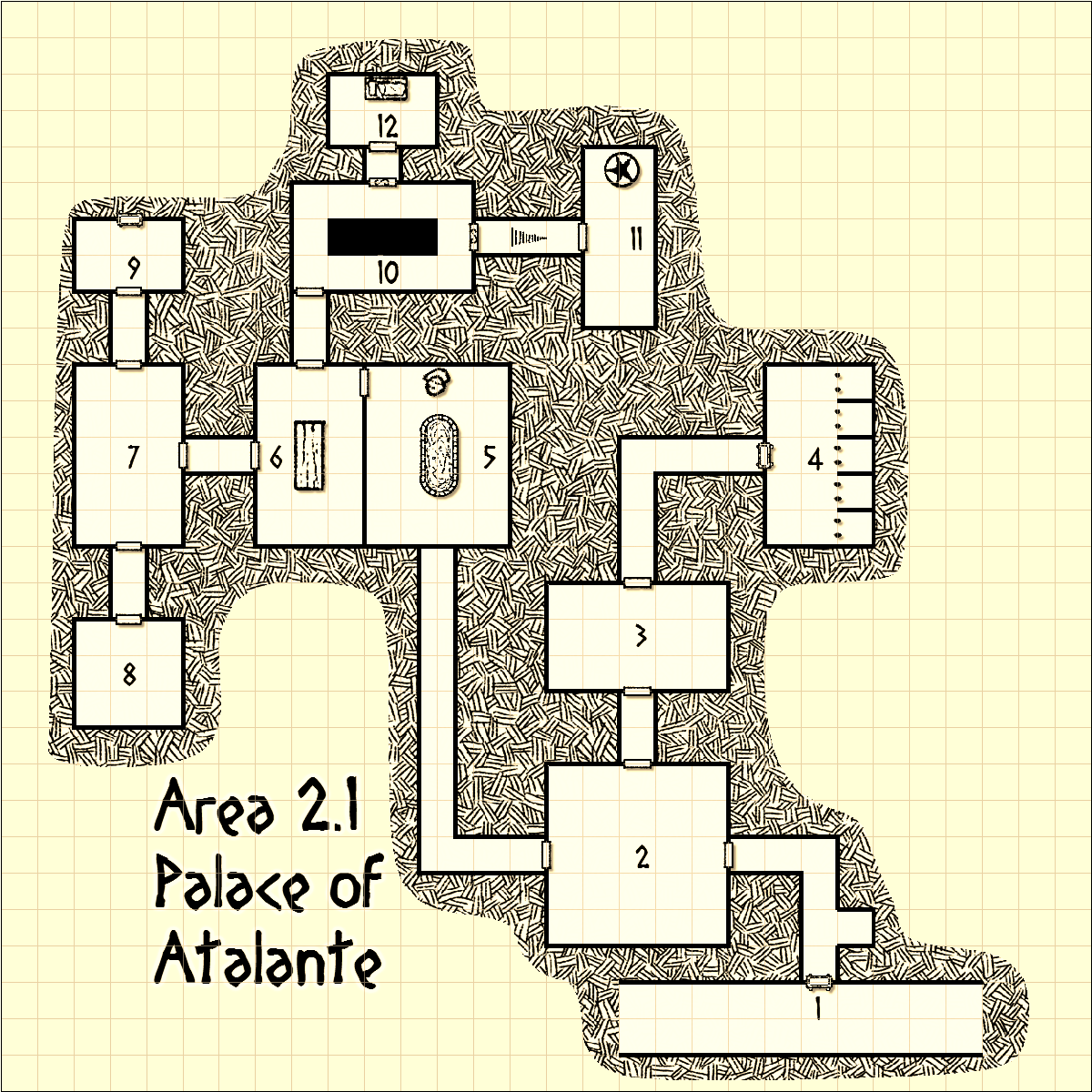 One other change I'm doing is trying to do everything electronically, right from the start.  No graph paper maps or hex paper, everything is in notepad or graphic files.  You never know if you'll want to collect it in a book for readers or vanity publishing.  Maybe my players will want to 'Return to the Black City' and I'll have the chance to recreate some older stuff this way.  How cool would that be?

Open Questions
I have a bunch of questions on how 5E is going to work for this kind of dungeon, which I only expect to answer through experience.  How well do the CR systems and encounter guidelines correlate to in-game challenges?  How will the short rest and long rest mechanics work, from a resource management perspective, when the game is built around episodic delves?  Heh, I have a list of observations on 5E, I'll just collate them into a 5E rules post.

Post Script
One funny thing I realized - it didn't require adoption of 5E for me to make some of these changes to the megadungeon approach!  I could have stayed with my favorite rules sets, like LOTFP or ACKS, and run smaller delvers, faster advancement by modifying the XP system, etc, and just run classic OSR rules with alterations to fit the modern gaming context.  My purist tendencies and adherence to tradition tended to get in the way, but I'm getting over it.  I'm looking forward to 5E, though, and the players like all the gadgets and powerful characters - the new races, classes, all that stuff.  I'm sure they'll show up tomorrow with tons of interesting characters.
Posted by John Arendt at 1:31 PM