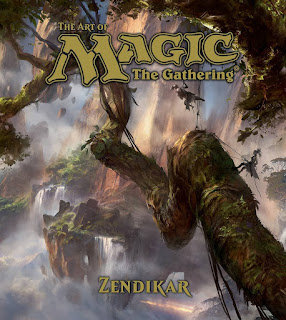 Wizards of the Coast quietly posted a PDF document over on their Magic: The Gathering site this week that has potential to eradicate barriers between the company's two flagship (fantasy) creative teams.

Here it is:  Planeshift: Zendikar

For the first time ever, we have a Magic guide to using one of Magic's premier settings a D&D milieu.

So what's the big deal?  Magic has been a 30+ year gaming juggernaut, steadily embracing more and more story elements to drive the gameplay.  The Magic card game features a series of powerful, magic-using characters called "Planeswalkers", whose  soap-opera intrigues and conflicts take them from plane to plane in the Magic multiverse.  In this way, every two or three sets of Magic cards shifts the action to an entirely different thematic world.  The Magic creative team works very hard to develop fully realized fantasy settings for each new set of cards - including settlements, civilizations, monsters, threats, culture, and character names.

Let's just look at the past few Magic settings:

There is a nice online gallery of the major planes in Magic:  MTG: Planes

What really drives Magic's storytelling is the amazing art for all of the cards. Magic's visit to one of these planes is embellished over a couple of card sets, meaning the creative team will commission several hundred pieces (400-700 paintings) of evocative fantasy art to convey  the story and themes of the world.  By contrast, a D&D book might have a few dozen pieces of art at best, and many of them are mini portraits or maps.

With Zendikar, Wizards of the Coast released a coffee table style book called The Art of Zendikar, which acts as both an art book and travel guide to the plane.  With the recent Planeshift: Zendikar, they've complimented the art book by providing guidelines on game stats and using D&D to run RPG games set in Zendikar.  Based on the survey attached to the article, this is also being looked at as a market test, to evaluate potential new products.

The test makes sense; the Magic product line invests in a massive portfolio of art, and leveraging that art and intellectual property for D&D game worlds gives them more opportunities to drive value from the art investment.  It's "low hanging fruit".  They can create more planar-guide coffee table books to sell the art, or shift these Zendikar-style game supplements into formal pay-to-own game supplements.  Plus, it might enhance both brands by getting some Magic players to try D&D, or getting D&D players to pick up a Magic deck.

Meanwhile, it's becoming clear what is the D&D 5E strategy and how it's working.  The core books are evergreen products, and the design team has been true to their word on keeping away from splat books and rules sprawl - no Player's Handbook 4, for instance.  (Thank you).  Instead, the product team seems focused on  releasing two "stories" per year, a large adventure campaign hardcover book, which is then cross-developed in novels, board games, and computer games.  Play the adventure, read the novel, buy the t-shirt, and then download the video game, that kind of stuff.  Something for everyone.  The quality of the stories seem to be improving as it goes along - Out of the Abyss was better than the previous two campaigns, and Curse of Strahd is absolutely full of win.  (I should get around to posting a review of Curse of Strahd, but it will gush with enthusiasm).

Overall, this foray into cross-promoting Magic and D&D is super interesting.  I'm guessing the Magic creative team is thinking like entrepreneurs and looking to harvest value from their creative work, with D&D fans getting a chance to benefit now that the iron curtain is falling.   5E seems to be doing well as a product line. The PHB is back in the Amazon top 100.  I greatly appreciate that the market isn't getting flooded with official splat books like DMG 2 and PHB 3, and this focus on multimedia stories is fairly benign; I can focus on the tabletop specific stuff and let folks enjoy the other media if that's their thing.  There's no downside.

I'll be watching the space closely.  The latest Magic set is Shadows over Innistrad, a visitation back to Magic's awesome Gothic horror setting.  The next set of cards for Innistrad will come out mid-summer, and that would be a good time to see if WOTC is going to publish a Zendikar-style art book and setting guide for D&D Innistrad.  I'd love for them to go back and do some recent worlds like Theros or Tarkir, but it seems more likely to be a forward-facing change.

Magic does nice trailers for each upcoming set, here's the recent trailer for Shadows Over Innistrad: