A Look at Matt Colville's Strongholds and Followers 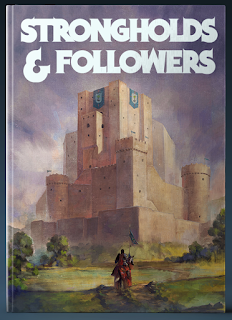 My roots in the roleplaying game hobby go back to the 1970's - the late 1970's, mind you, but I was still old enough to crack the Holmes Basic and fully embrace the game by the time the Moldvay boxed sets were on shelf at Toys R Us.  It would still be a few years before I started collecting those storied hardcovers for AD&D and we embraced "Advanced Dungeons & Dragons".  One of the things we noticed as we matriculated to the 1E Player's Handbook was this concept of "name level" - a 9th level character could clear some wilderness, build a stronghold, and attract followers.  AD&D characters had an end-game that transcended dungeon crawling.  Hitting 9th level was the big time.

Both AD&D and Basic embraced this end-game in subtly different approaches.  AD&D was supplemented by war-gaming based miniatures rules called "Battlesystem".  The Basic and Expert boxed sets went on to have Companion, Masters, and Immortal sets (we abbreviate the lot of them as BECMI), and BECMI introduced domain-level game play, threadbare economics and taxation, and several abstract war simulations known as War Machine, Siege Machine, and Sea Machine (naval battles, yo).

I loved BECMI.  The BECMI rules were compiled into a single volume as the Rules Cyclopedia and I've worn out several copies.  Plus the bindings were terrible on Rules Cyclopedia.  Unfortunately, domain level play and mass warfare is not something 5E has embraced, it's been overlooked by the benevolent WOTC overlords.  Enter a character named Matthew Colville.  He is a frequent Youtuber, game designer, and fellow child of the 80's.  His show "Running the Game" is a great resource for new dungeon masters embracing the hobby.  I'm a fan.  Sometime in the past couple of years he took a stab at rectifying Fifth Edition's lack of domain play and published his take on the subject, Strongholds and Followers.

Physically, the book is really nice.  The artwork is good, the layout is clear and simple.  It hearkens back to D&D's roots in pseudo-European fantasy, which is fitting for a book that's about castles and strongholds.  40% of the book is dedicated to strongholds and what characters can do with them; the rest of the book is a sample adventure (based in Matt's homebrew world), a bestiary of monsters from his home setting, and then an appendix that presents a simplistic mass-combat system "Warfare".  I like the book, but there's stuff missing to fully embrace domain play, and the sample adventure and bestiary are basically filler.

The principle sections of the book are the rules and systems for establishing strongholds.  The basic stronghold types are Keep, Tower, Temple, and Establishment, with variants for all of the character classes.  Barbarians may establish a Barbarian Camp in lieu of a Keep; a Paladin would have a Chapel, a Warlock a Sanctum instead of a Wizard Tower, that kind of stuff.  There are simple rules on building strongholds, recovering them from ruins, and even joining forces with your fellow player characters to build an amalgam.  It's all good stuff, simple and easy to execute, and fun.  Attracting followers and amassing units and troops is tied into the stronghold rules.

5E is "player-character-centric" with combat abilities being the principle reward as characters gain levels.  Matt's chosen to attach mechanical benefits to owning a stronghold that enhance a character's abilities.  There are demesne effects, stronghold actions, and class feature improvements that come along with owning a stronghold and surrounding territories.  Conceptually, demesne effects and stronghold actions are reminiscent of lair actions that monsters get; the class feature improvements are straight power boosts.  For instance, the fighter gets to turn one or more of his attacks into an automatic critical as a reward for owning a stronghold.  Once used, these abilities don't return until the character spends some extended time at the stronghold (a new type of rest called "extended rest").  I don't love the class features, they're what we called a dissociated mechanic in the 4E days, "I can hit you really hard because in a remote land somewhere, I own a castle!", but I can see how they would create a pull for reticent players to dip into domain ownership.  I always viewed the domain game as an end in itself, a chance for high level characters to shape the world and campaign setting, but Matt's approach probably casts a wider net by appealing to both power gamers and the story people that care about campaign effects.

I don't have much to say about the adventure; "Siege of Castle Rend" is fine, and it does put a ruined castle in the hands of mid-level characters and give you the opportunity to start using the domain rules ahead of the end game.  The monsters in the appendix are also fine; most of them are based on planar factions in Matt's world and tiered to interact with low and mid-level characters.  There are lower level angels (the Celestial Court), chaos lords from the Court of All Flesh, fey lords from the Court of Arcadia, that kind of stuff.  Not bad, just nothing I needed in a castle book.

The Warfare rules are only about 7 pages in an appendix, but hearken back to War Machine from the old Companion Rules box set.  Essentially, the prep work is creating a "Unit Card" for each group of soldiers in your army, and then calculating some unit attributes off of the unit's equipment, training, size, and characteristics.  The warfare resolution rules use simple percentile dice, orders, and some battlefield factors.  I loved War Machine, this is very reminiscent of War Machine, and definitely something we'll use - or at least try them out and see how they work at the table.

Overall, I will absolutely be using Strongholds and Followers in my campaigns.  I don't love the class features that give the characters combat abilities because they own a keep somewhere, but I can see how they fit the 5E Ethos and will motivate players to establish bases.  We live in a world where a Bard can heckle someone to death with a Vicious Mockery magic cantrip, after all, so amping your combat juice because you have a distant lair isn't that egregious.  However, to do the domain game well, there's a lot missing that has traditionally been included in these types of rule - economics, taxes, wealth from the land, population growth, and guidelines on generating rival domains, army units, and their high-level rulers.  In other words, this is no ACKS (Adventurer Conqueror King) for 5E.  I have seen rumors that Matt was working on a follow up book actually called Kingdoms and Warfare, which would seem to fit the bill.  I haven't been keeping up with Matt's Youtube channel to know if it's a project he's actively talking about or working on.  I hope so - Strongholds and Followers is promising, and I'm certainly part of the target audience.  I like that designers are reviving game elements from earlier editions that have been ignored by the crowd in Renton.  (Edit:  I found out today, 10-21-19, the kickstarter for Kingdoms and Warfare is live.  Very nice, I'll definitely be backing it!)

You can get a copy of the book here.  (It seems lazy to do a review and not link to the store!)  It's only $30 for both the hardcover and PDF, I found this to be a fine value when so many 3rd party hard covers seem to be $40-50.