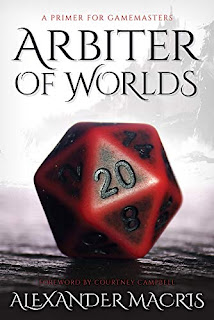 Last year I picked up a kindle book written by Alexander Macris called Arbiter of Worlds, a general collection of essays on how to build and run an old school campaign, and why this is the most satisfying and memorable approach to adventure gaming due to emergent story.  Honestly, if you're still out here reading OSR blogs, even that of a 5E adopter like myself, it's stuff you probably already know (albeit collected into a handy guide and presented in a conversational tone).  A lot of it's right there in the 1E Dungeon Master's Guide, nestled among all the purple prose and Gygaxian expository.  Alex, incidentally, is the developer of the Adventurer, Conqueror, King system (ACKS), a BX-style retro-clone with the campaign and worldbuilding elements dialed up to 11, with an especial focus on economics, domains, and warfare.

Both ACKS and Arbiter of Worlds suggest a campaign building approach called "top down, zoom in" that mirrors how I like to approach campaign building, so I'm going to give the methodology a try as I start working on "Erda".  Like it says in the name, you start with the world concept, develop a large area map, establish some broad brushstrokes around the history of the setting, and craft some notes on culture.  Then switch to the local area where adventures will start for the "zoom in" portion, creating a small area hex map, points of interest, settlements, dungeons - the detailed sandbox area.

It's a rational model and mirrors how I think about world-building.  I like to start with the big picture, but it's important to shift gears quickly into the pragmatic stuff that's actually going to matter at the table in the first few game sessions.  Following a constrained methodology will help stay on a plan.  With than in mind, as I develop the campaign setting and megadungeon for the Harrowdale campaign, I'm going to test-drive this "top down, zoom in" system and post the progress here.

As for the rest of Arbiter of Worlds, the essays are good.  I'll pull it out to refresh and see which ones warrant discussion out here on the interwebs.  I read it on the iPad during some air travel last year in a 3-4 hour burst - I get in most of my pleasure reading on work trips.  (I'm currently working on Ovid's Metamorphoses, a gap in my classics knowledge).  Arbiter of Worlds is a $5 kindle book over at Amazon (link here).  However, if you already own ACKS, much of the top down/zoom in approach is already laid out in the campaign building chapter (Secrets).

I'll be back soon with more notes on the Erda campaign, and updates on my Adventurer's League gaming: Descent into Avernus - blech, and the start of Dungeon of the Mad Mage campaign - two thumbs up!!  Plus my home game has started their exploration of Acererak's "Tomb of Annihilation" in Chult.  We'll have stories.
Posted by John Arendt at 5:00 AM