Are Your PC's Snowflakes or Compost?

Why Tyler Durden Would Play AD&D 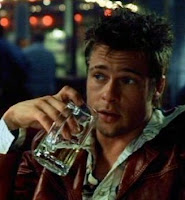 "You are not special. You're not a beautiful and unique snowflake. You're the same decaying organic matter as everything else. We're all part of the same compost heap."

I spent some time perusing a message board recently and encountered (gasp) many different opinions.  As I scanned several discussions, particularly about world building, a pattern became apparent to me- a loose correlation between how the referee views adventurers in the setting, and their approach to world building and running adventures.  I'm labeling these two approaches to player characters Snowflakes or Compost.

Snowflakes
Referees in this type of game are likely to come right out and tell the players their characters are special.  They're also expected to be heroes.  Adventurers are rare in the setting, and the player characters, who are all chosen, god-touched, destined, royal blood, or otherwise meant for greatness, will set out on a heroic journey to do something... very important.  This is the realm of Tolkien, Shannara, Earthsea, and much of fantasy literature.

In this type of world, NPCs are like monsters.  They strut and fret their hour across the stage, and then are heard no more.  The world is constructed like those old Wild West movie sets, props to give the illusion of a world.  The elements of the game world exist to support the referee's story and enable the characters to be heroes.  Detailed demographics don't add value; the referee is empowered to make up what is needed in terms of NPC's to fit the needs of the story.  Player characters rarely run into rival adventurers in dungeons, if ever.

Adventures involving the snowflake style are probably plotted adventure paths - the goal is to build a story of epic heroic fantasy and that needs planning and authorial guidance.  Referees feature milestone experience or a similar story-based award, to keep the player characters leveling up at a brisk pace so they can face the next set of challenges.  Encounters are somewhat balanced to the level of the characters, to provide sufficient challenges for an exciting game (Goldilocks style - not too easy, not too hard, but just right).

This style seems massively popular with the influx of gamers in the past decade, and what little of I've seen of popular Twitch games.  In the OSR, we trace this shift towards heroic fantasy and plotted (epic) stories back to Dragonlance, where the players take on the role of pre-made heroes of destiny (characters from the actual fantasy novels themselves.)

Compost
This style of world building assumes player characters are made of the same "compost heap" as the rest of the world.  While adventurers will eventually rise to levels of great power, at the beginning they're no better than a common soldier or town guard, true apprentices in their chosen fields.  Adventurers are common in the world; many of the rulers, archmages, and luminaries of the setting got their starts as adventurers themselves.  (Just look at characters like Mordenkainen, Bigby, Robilar, and more from classic worlds like Greyhawk).  Because player characters became rulers with armies, compost settings needed mass combat rules, too.

NPCs in a compost game are built with the same rules as player characters, with the same levels of power.  Rival adventurers are common in this type of setting and the random encounter charts will feature NPC parties regularly, both in the wilds and dungeons.  Compost games favor an open world format - some type of sandbox, with numerous ruins and site-based adventures, and adventurers earn experience predominantly by recovering treasure. The story is less about the referee preparing an epic storyline, and more about presenting a setting with interesting choices.  Compost games are intensely interested in demographics and worldbuilding because they rely heavily on random tables - random tables are defining characteristics of the setting, the secret code.  The world is not level-balanced, and it's possible for careless player characters to stumble into danger way beyond their power level.

Editions and Bias
The snowflake style started in D&D back with Dragonlance.  I don't remember how common it was during 2E (I mostly skipped that edition) but epic adventure paths highlighting heroic characters were a defining characteristic of 3E and Paizo.  Nonetheless, 3rd edition and 3.5 took the compost approach to demographics and worldbuilding to the extreme - every NPC in the setting had player character style rules and templates applied.  It was a path of madness.  I can't comment how it may have improved with Pathfinder or PF2E.  4E completely embraced snowflake style worldbuilding, but it forced the referee to level balance every encounter to the level range of the player characters.  The 4E world made no logical sense in the absence of PCs.  A 4E Troll, for instance, had an armor class somewhere in the 30's; no NPC in the setting could even hurt a troll, unless some level-appropriate player characters came along to fight it off.  A single troll, nigh invulnerable, would reign supreme in a small kingdom!  It was terrible.

5th edition leans more towards the snowflake approach, but the pendulum slowly shifts towards the center.  NPCs don't follow PC rules, and there's no easy way to build rival adventuring parties - the likeliest approach is to cobble something together from the limited NPC stat blocks that have been published here and there in monster books.  There's nothing stopping a referee from making NPCs using player character rules, though - it's just unwieldy.  Random tables for wandering monsters weren't in the base game, they came out later in a sourcebook, but they're there now - and a few of the published adventures have started incorporating them into the design.  A 5E conceit called "bounded accuracy" ensures your village full of commoners could defend themselves against a predatory monster, such as a troll.  There's no in-game path for player characters to move into domain ownership and become rulers or wage military campaigns - 5E campaigns are laser focused on adventuring.

I suppose I'll keep plugging away on my future 5E setting for sometime after Tomb of Annihilation - but now I have a nickname for it that works on several levels.  The compost heap!