A Prelude to Undermountain

How do you start a retrospective on a 16 month D&D campaign?  From the beginning?  I guess so, but death by explication is a serious threat to the readers.  I'll elide the minutiae and strive for broad brush strokes.

The campaign, Dorks with Bows Undermountain, started in Waterdeep with the published adventure, Dragon Heist.  I had run Dragon Heist for the Adventurer's League crowd before the pandemic and noticed it had many commendable qualities that I wanted to explore with my regular gamers.  Although several chapters are heavily plotted (like the cinematic roof top chase sequence) you can leverage the adventure to embed the characters into the political factions of the city, grant them a cool home base lair, and land them with a royal 50,000gp reward at the end of the adventure.  It's customizable with many opportunities to expand.  Politics, property, and fantastic wealth are all rife with complications, and complications are fun.  My players had agreed that playing Undermountain, the only official published WOTC campaign that goes all the way to level 20 characters, sounded like a worthy endeavor, and Dragon Heist is a fantastic way to start a campaign in Waterdeep.  So we did.

I'm not going to recapitulate my second Dragon Heist campaign; the retrospective I did after running it with the Adventurer's League crowd is fine.  As my home group ended this one, the Dorks with Bows (known around the city as "The DWB") had ties with a group called the Harpers, ties with Force Grey, and an alliance with a rogue faction of the Zhentarim.  They also made several powerful enemies.

I treat the Harpers like the Fellowship of the Ring and the Council of Elrod - a diverse group of (stereotypical) powerful fantasy do-gooders who try and keep a lid on the dark forces of the world, their ears to the tracks.  They are melodramatic, where every new threat is the single greatest threat to civilization.  Force Grey are mercenaries working for the Black Staff of Waterdeep, a powerful wizard enforcer who ruthlessly eliminates threats to the city.  They are part Suicide Squad, Dirty Dozen, and the Expendables.  The Black Network (the Zhentarim) are a continent-spanning network of criminals (I treat the zealots like the MCU's Hydra organization with different leaders portrayed like comic book villains such as Zemo or Red Skull).

Very early in Dragon Heist, one of the dungeons brings the characters into contact with a Mind Flayer and its intellect devourer pet.  It's a very dangerous encounter for 1st level characters!  The Mind Flayer isn't there to fight, it quickly melts away from the combat, but even a solitary intellect devourer is rough.  I'm not one to pull punches, and at least one PC died in that particular scene.  Much later in Dragon Heist, one of the Force Grey side quests involved the characters trying to discover why a high level fighter named Meloon, a Force Grey agent, was acting uncharacteristically.  That particularly side story ended for us with Meloon dead and an Intellect Devourer materializing outside of his empty cranium - it had been using his body like a puppet.  That set off "Invasion of the Body Snatchers" style paranoia and mayhem!  Who else among the Waterdeep elite have been replaced by Intellect Devourers?

The body snatcher problem became the catalyst for our Undermountain Campaign.  In a conference chamber high in Black Staff Tower, the Black Staff briefed the players.  The city faced a grave threat.  The Xanathar Guild has allied itself with a Mind Flayer and are using Intellect Devourers to replace prominent citizens with loyal puppets.  The Guild headquarters is known to be linked to the underground pirate city of Skullport, which has been closed off from the surface waterways for some time, but there are ways to reach Skullport from within Undermountain, the legendary dungeon beneath the city.  The player's quest, for the good of the city, is to scout and explore the first few levels of Undermountain, starting with the entrance beneath the Yawning Portal Tavern, and to report back when they've located Skullport and found the entrance to Xanathar's guild headquarters.

This is how we started our exploration of Undermountain. 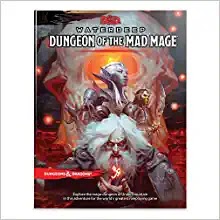