Let's begin our first of several game sessions that centered around Undermountain level 3, the Sargauth Level.  (Sarguath is the slow moving river that flows south along the eastern edge of the map).  Ah yes, the map - I've included an image below to make it easier to follow along, and added some simple annotations. 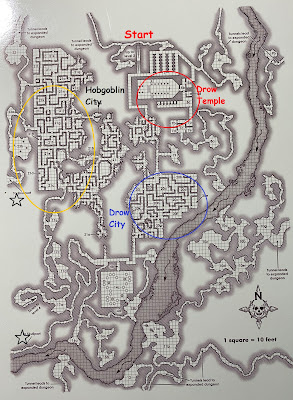 You'll notice when the party comes down the stairs from level 2, they are immediately faced with a go left/go right type of decision.  Go left (east) and you'll find yourself in a small sub area that houses a drow temple, prisons, and various drow torture/sex rooms.  If the players go right, they'll make their way to the partially collapsed remain of an ancient dwarven city called Stromkuhldur, which is now a drow military outpost.  There are some "no-man's land" tunnels between the drow outpost and the other half of the ruined dwarven city, which is now a hobgoblin base called the Hold of Azrok.  I put a few stars on the left edge of the map where there are paths to Skullport, the underground pirate city.  By way of reminder, the party's overarching goal in Undermountain is to scout level 3 and find a way to Skullport, and once there discover how to get into a secretive thieves' guild headquartered beneath Skullport.  Finally on the map, there's the river itself, and several caves and lairs which can only be reached by boat across the river.

The level 3 map is very large, but also somewhat linear.  The river is the principle feature that gives the players freedom to skip elements of the linear path, as well as the ability to explore the caves and lairs on the far side.  As we go through our play reports, you'll see my players never really learned to exploit the river in their exploration of level 3.  Because of this, they were very challenged by the drow elf hold over the middle of the map.  Level 3 presented them with a good mix of exploration, combat, and roleplaying opportunities, and several sound defeats.  Let's get on with recounting their first one!

The drow elves on this level are led by a priestess who has converted a Dwarven temple into a spider temple; they've been kidnapping people, possibly even citizens from the surface, and using them to incubate spider eggs and give birth to giant spiders.  The temple is festooned with corpses in webs with burst egg sacs that grew out of the victims.  It's a fantastic set piece if you want to accentuate a horror vibe.  There are several clues in the caves and passages before the temple, such as a hapless adventurer who died from things bursting from within, to give the players some foreshadowing as they explore the eastern area.  At the time, the characters in our party were still Bosko (goliath barbarian), Virsk (human cleric), Alfred (human fighter), Ace (elf wizard), and Teukros (drow rogue).  Their attitude was in the vein of, "Yay, we're going to smash the guts out of some spiders…"  After a relatively easy time breezing through levels 1 and 2, they would be coming back to earth very soon.

As a DM who has his roots in the 1980's, let me tell you something I'm enjoying about running this 5E megadungeon:  many of the encounter areas consist of zones where a group of rooms contain like-minded or allied inhabitants.  When the players enter the zone, you can give the monsters a tactical response as warranted by their intelligence and organization.  It's a chance to be creative.  Throw the kitchen sink at the players if you want.  Have fun.

An old school mind-set is to be tough but fair; you are an adversarial DM from the perspective that you're not there to let the players win.  They make their choices, they roll the dice, the chips fall, you report on the results.  That's how the story gets made.  You are a neutral arbiter of their actions and how the inhabitants of the game world react.  When those inhabitants are highly intelligent, organized, and dangerous, watch out, players.  Carelessness can alert whole areas and find the adventuring party taking on a much bigger force than expected.  Many combats in 5E feel like two opposing sides bashing each other with styrofoam weapons.  Escalating the tactical situations as intelligent opposition forms against the players is where you get to feel Gygaxian again.

Maybe you can see where this is going… as the players explored the eastern dungeon, they tripped on the sentries for the drow temple (which included quaggoths and a drow elf mage) and got bogged down fighting mooks while the mage gathered reinforcements.  (In 5E terms, a "mage" is a 9th level wizard, so they usually have access to some serious damage spells like cloudkill and lightning bolt).  Cloudkill synergized well with the quaggoths, who are immune to poison, while the confined spaces maximized the impact of the cloudkill on the player characters.

This battle was many game sessions ago, so apologies if I'm fuzzy on the play-by-play.  The drow mage leveraged "greater invisibility" to stay invisible while attacking, after alerting reinforcements in the temple proper.  Once the players got crushed by a lightning bolt, Ace realized they were facing an invisible caster and used "detect invisible" so he could counterspell and duel the enemy wizard.  The barbarian and Alfred hacked their way to the entrance of the temple, carving up quaggoths, troglodytes, and giant spiders along the way.  Virsk, as a storm cleric, figured out that gust of wind could take care of any further cloudkill nonsense.

The big gun in the main temple was the drow priestess.  As she made her way to the front, she dropped more giant spiders on the party through "conjure animals".  I still haven't yet succeeded in a "summon demon" roll to bring forth a Yochlol in one of these drow priestess combats, I'm 0-4.  Ace was able to knock the drow mage to zero hit points, but no one was able to make it over to his body and finish him off; my players know not to assume that powerful NPC's are instantly dead at zero hit points.  By now, the party was fairly injured after smashing through a guard post of quaggoths, an assault of troglodytes, several waves of giant spiders, and dueling an invisible drow elf wizard.  When the drow priestess dropped an insect swarm on them, characters started to drop.  Alfred died; he got put at zero hit points, and it took the players long enough to drag his corpse out of the insect swarm that he accumulated enough 5E failed "death saves" to be truly dead.  The casters were out of spells and everyone was limping along.  I think Teukros, their own drow elf rogue, dropped a darkness spell behind them so they could retreat and regroup.

The players retreated to a nearby cavern where they activated their Daern's Instant Fortress to create a secure location to rest and recover.  Virsk had been holding onto a raise dead scroll which they used on Alfred.  (This was before they made Revivify a staple).  When the players emerged from the tower after a rest, they discovered it was completely webbed and besieged by phase spiders, which was a fun combat and a reminder they were camped entirely too close to the enemy.  The players quickly made their way away from the "temple side" of the dungeon and towards the ruined drow city.

I've seen other game reports regarding level 3 of Undermountain; getting roughed up by the drow priestess seems to be a common theme; I've even heard of full on TPK's in this area.  My players would face her a couple more times before finally quelling the threat.  Next time we'll pick up with the drow outpost and their visit to the Hobgoblins.