Ride into the Danger Zones

The game side of D&D can sometimes cause issues with believability and realism - if you care about that stuff - but the game elements create just as many creative opportunities to work solutions into the campaign.

For instance  - why can adventurers find thousands of gold pieces and hordes of magic items, but the economy of the world still runs?  How can a 10th level fighter hold off the an entire army of orcs and take multiple arrow shots?  Why do low level monsters live on the top level of the dungeon, and the monsters get more dangerous the deeper you go?

One thing I like about the megadungeon trope is that dungeon level = monster level.  It lets the players decide on their level of risk versus reward.  "We're only level 2, but we do have those extra scrolls and some healing potions - let's try those stairs down to level 3 and maybe score some bigger treasure!"

It's a little harder to structure the level of danger in the wilderness in the same way that dungeon level corresponds to encounter level.  I've been considering zoning hex maps with color coded hot zones; the players wouldn't see the zones, but they could learn about the dangerous areas through rumor mongering and investigation.  Danger zones would help structure wandering tables and lairs to fit the general level of an area; it's a way of implementing the Wild Frontiers idea I was talking about last week.

Take the example above.  The purple represents the civilized lands; once you cross the river into the wilds, you enter the realm of danger.  The green pockets might represent dangerous swamps or forests, the yellow is a long chain of mountains, the orange is the Murky Forest beyond the mountains, and areas of red might be dragon lairs or giant kingdoms (in the mountains), or the stronghold of a Big Evil Bad Guy.

Below is a conceptual sketch of how this could be applied to a world map.  I've been wondering recently how I could get a D&D campaign to work for something like the Age of Exploration, balancing the gamist elements across a larger campaign world.  The civilized lands are very stable, and the group will need to travel to lost worlds and distant lands to find adventure.

In this map, faux-Europe is highly civilized except for a few areas that are still a little wild; the orange and red area in the dark country would be the misty lands of Gothic Horror.  The yellow islands are lost worlds like the Isle of Dread, and the continent across the ocean would be the Demon Lands and the big bad evil sorcerers.

This type of hex campaign could be structured with levels (like a dungeon) but involve world-spanning travel and pulp action.

Well, if a TPK happens to my current group any time soon we'll try it out... oh, and the Black City would work nicely on some northern island... 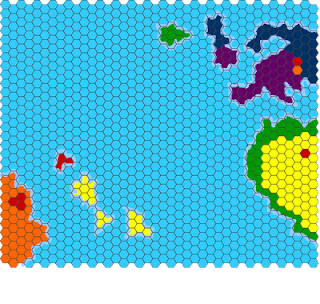