Made of Gygaxium. Black City Report #1


We kicked off the Black City campaign last weekend, and I promised a game report.  The quote of the night was this one, from Shamus:

DM:  The hatch in front of you appears to be made out of an unknown metal.
Shamus:  From now on, I shall call this metal… Gygaxium.

I might just take that on as an aspiration goal - ensure the megadungeon always incorporates a lot of pure "gygaxium".  This other quote was a close second, one of our 10 year old players that groks the challenge of old school dungeon exploration:

Nogal:  Playing classic D&D is like auditioning.  Every time you survive, you make the cut for another week.
After Kolfina's throat was torn out by a hungry Gjenganer:  Kolfina didn't pass her audition.

Characters were rolled, one sentence backgrounds were tossed out, and the group chose to journey to Thule on Isgerd's Fury, the sample ship I included in the player's handout (see it here, Isgerd's Fury).  We upgraded Isgerd's Fury from a knarr (crew of 10-15) to a longship (crew of 30-40) because the party is so large.  This gives them a lot of low-level shipmates as potential retainers, as well as a few high level NPC's with overall responsibility for the ship and gear.  The party randomly determined a Viking homeland, which was established as Zealand - a large island off the coast of Jutland.

The Isgerd's Fury link above provides the description of arriving on Thule, getting oriented, and building the camp.  They took a few minutes to look at some pictures of Svalbard and Spitsbergen island, the real-world inspirations for Thule.  Then it was off to the Well of Woe, the most well known entrance to the dungeons.  The players have the option of striking out overland, exploring the upper ruins, excavating, any of those things, but the dungeon seemed like a good idea for a quick jaunt.

The hike to the city involves passing by the smoky outpost of Trade Town, then a few miles along the fjord until the city comes into view.  It's a sprawling basalt ruin that stretches a few miles along the inlet's coast.  The north half is obscured by mist and cloud, and a few extant structures and towers jut skyward from the mountains of rubble.  The trail descends down a hill until the party was walking among the towering piles of rubble, and then the group was at the plaza.

The Well of Woe is a 30' steaming hole in the center of a small plaza in the south of the city; nearby, a handful of soldiers maintain a guard picket in a small shelter.  There was a bit of chatter with the guards, who charge a toll in return for letting explorers use their ropes and ladders to descend down the well.

At the bottom of the 30' drop was a large chamber that formed the end-point of a rounded, 20' wide tunnel that appeared to stretch into the distance beneath the city - a dark highway beneath the rubble streets.  There were some side passages and a hatch in the chamber too.

Once the group was safely down, the soldiers quickly pulled up the rope ladders.  "Make some noise, bang on metal, or blow a whistle when you need to come back up.  And make sure you have a light - we won't drop a ladder if we can't see you!"

On the wall was a kind of schematic, looking a bit like this diagram here: 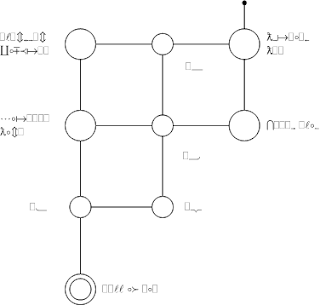 The group hypothesized it was some kind of tunnel map, but they can't be sure yet.

Faced with multiple passages and an oval hatch, they chose the hatch.  One of the strong guys pried it open with a crowbar; it slid into the wall on a track, revealing a set of stairs leading up to a small chamber with another passage leading out.

The only thing in the chamber was a small stone table with a recessed surface, like a game table or pool table.  They started searching (astutely leaving no one on guard duty) so of course they were surprised when a pair of Northmen stumbled up the stairs behind them.  Only I lied!  They weren't Northmen, they were hungry dead Northmen, each sporting mortal wounds that became hideously apparent when the monsters lurched into the light.

The halfling, Kolfina, was quickly killed as the monsters clawed and bit her, biting into her neck.  Put that in the history books - Kolfina the Halfling was the first player character death in the Black City.  The party rallied and hacked the dead men after a spate of horrible rolls kept the monsters in the fight longer than necessary.

Since we had combined character generation and pizza with the campaign kickoff, the night was getting late, so the group quickly found themselves back at the Well of Woe, whistling for the guards to drop a ladder.  "That was quick!" said the guards.

My group likes to name their adventuring party, and it didn't take long for a new name to emerge.  Vikings are the pirates of the dark ages, the island's modern day name is Spitsbergen, next thing you know, they're calling themselves The Spitsberg Pirates.  What’s the equivalent of "ahoy" or "shiver me timbers" in old Norse?  Maybe "dead men tell no tales" would be more appropriate.