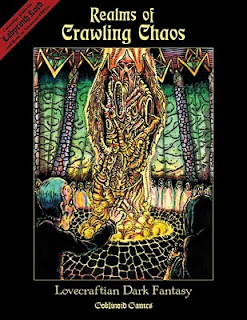 Work continues to compel  a lot of travel; that's given me the chance to catch up on some reading, or in the case of Realms of Crawling Chaos, to read it again, in anticipation of a formal review.  Realms of Crawling Chaos is a sourcebook that contains ideas on incorporating elements of dark fantasy, inspired primarily by the writings of HP Lovecraft, into your Labyrinth Lord game.  It's written by Daniel Proctor and Michael Curtis and available at the usual suspects: Realms of Crawling Chaos.

The book is not a horror source book and doesn't contain techniques for incorporating horror into your campaign; it provides game statistics and ideas for using Lovecraft elements in your fantasy game.  That covers a distinctly different design space than an explicit horror game like Call of Cthulhu.  The fantasy world supported by Realms of Crawling Chaos discards the Tolkien-inspired races and monsters of traditional fantasy for a human-centric campaign where the ancient ruins and civilizations were built by monstrous antecedents like the Elder Things or the Great Race of Yith.  The rules are explicitly written for Labyrinth Lord (which just means you could borrow them for any of your favorite old school rules sets - or Labyrinth Lord).

There's an intriguing philosophy at work in the writing here; the authors expressly declare that they've returned to the source, Lovecraft's public domain writings (and a few of his peers), to take a fresh look at interpreting those creations for the game book.  This means ignoring versions that have appeared in the flagship Cthulhu game line, Call of Cthulhu, as well as ignoring the enhancements by post-Lovecraft authors that have been absorbed into Chaosium's presentation of the Cthulhu Mythos.

Here's an example:  the Hounds of Tyndalos were memorialized in a Frank Long story as time-traveling hunters that slide through the angles of time and space, ever-blocked by round-cornered rooms; did you know they're originally mentioned (in a throw-away line) during a conversation in "The Whisperer in Darkness"?  Ignoring the later, post-Lovecraft creations, the writers here are free to offer a new approach to the Hound using only the name.  (That doesn't mean the new interpretation is great; it's just different, and moreover, free of any licensing entanglements).  In other cases, effects hinted at in a Lovecraft story are given a full-blown treatment here as a new spell or formula; I was delighted to see Geas of the Descendant as an explanation for Charles Dexter Ward's obsession with revivifying his dead ancestor, Joseph Curwen - taken, naturally, from "The Case of Charles Dexter Ward".

So what does the book actually cover?  There are some new races (or race-classes, for Labyrinth Lord) that cover Sea Blooded, Subhumans, White Apes, or White Ape Hybrids.  Subhumans and White Apes are basically fighter variants with level caps, and small race bonuses to differentiate them from humans; White Ape Hybrids combine the abilities of a fighter-thief, and Sea Blooded are fighter-clerics.  Sea Blooded represents Deep One hybrids, and allows the player to take on a character that devolves completely into a monster over time; it's by far the most interesting and offers some interesting role playing opportunities.

There is a section on new formulae and spells, covering many of the signature incantations found in the literature, as well as providing some magic healing, if the referee removes the cleric from the game.  There's a complimentary chapter on ancient tomes that emphasizes study, scholarship, and the perils of forbidden knowledge, that we so often see in Lovecraft.

There is a large section on monsters, covering creations found in the works of Lovecraft, Clark Ashton Smith, and even Robert E Howard.  As I mentioned above, the authors of Realms of Crawling Chaos tried to take a fresh look at each creature, ignoring the works of later authors or other game designers.  The monster interpretations are a bit hit-and-miss for me, but I'm glad to adjust them to fit my own campaign and vision.  Lovecraft never defined a mythos or cosmology (that came from later authors) so it is interesting to see the "pantheon" of god-like beings all appear as 'Great Old Ones', ignoring the later classification into Outer Gods, Great Old Ones, and Elder Gods that defined later writing and has been institutionalized in Call of Cthulhu.

Two of the most interesting and useful chapters are Psionics and Eldritch Artifacts.  I don't recall any Psionics in Lovecraft (wink, wink), but the authors call it out as something that fits Lovecraft's scientific world view.  It provides a way of giving the various entities in the monster section unusual powers and abilities.  I found that psionics work well here.  There are no sanity and madness rules like in Call of Cthulhu, so psionics endows the alien Great Old Ones with overwhelming presence due to their freaky mind powers.

Various artifacts from the Lovecraft catalog are represented in game terms, and there's a lengthy section on creating new magic items and artifacts that defy conventional expectations - a trio of hundred-entry tables offer a bit of random generation.  If you're playing a game like Lamentations of the Flame Princess, which eschews traditional magic items as represented in D&D type games, this section alone is worth the purchase of the book.

I should mention - the book is about 60 pages of material (66 pages in the pdf, including covers and OGL statements), in black and white with a similar art style to Labyrinth Lord.  I'm not a huge fan of the art, but it fits the idiosyncratic fantasy vibe over horror.  It's available in a stapled soft cover, which is what I usually use at the table.

Realms of Crawling Chaos is a regular reference book in my campaigns; I've drawn inspiration from the monsters, used elements of the psionics directly, and played around with the tables to create unusual artifacts and magic items.  There's no higher praise or recommendation than pointing out that material from this book appears every time we sit down to play.