Return to the Black City

Thanks all for the kindly words about our adoption and well wishes for the recent trip to Ethiopia!

One good thing about a 3 week break is that I got to put a lot of notes in my brainstorming notebook - and since the regular campaign in Gothic Greyhawk is 90% modules, all that work went into the Black City.  I've got the major encounter areas scattered across the surface ruins sketched out, the viking trade town that will serve as the home base, and all five mini dungeons for level 1.  Posts for the next few weeks should be heavy on Black City content as I turn scribbled notes into blog posts and get this thing in a playtestable format.

If you're fairly new here, the Black City is an ancient ruin on the island of Thule in the frozen north sea.  The builders of the city are long gone, and the ruins were rediscovered by the Northmen a few years ago who have begun exploiting the lost wealth and bizarre artifacts found in the city.  My inspirations include the city of the Elder Things (from Lovecraft's At the Mountains of Madness) and the desire to build an unusual megadungeon that mixes weird science and some sci-fantasy with Vikings.  Here is a link to view all the Black City related posts.

The Blue Obelisk
Labeled J on the new City map 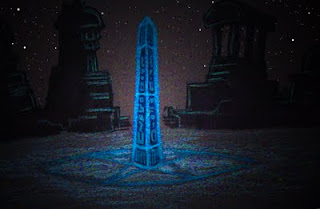 Just north of the great glacier is a 40' tall stone obelisk in the center of a snow and ice covered clearing.  The obelisk radiates extreme cold and will cause 1-4 points of damage if touched with bare skin.  At night, the obelisk glows blue and the faint lines of a gigantic magic circle and hexagram can be seen just below the ice.

If a character does touch the obelisk, they'll see the face of a young boy with large almond shaped eyes swim to the surface of the translucent stone.  The character will receive a vision of lightning, followed by a room with a bed of glowing crystals.  The character will understand that removing the blue crystal from the matrix will turn off the obelisk and reveal a secret stair beneath it, leading to a treasure.  (These manipulative visions lead to Level 1 Transit Tunnels - The Electric Co. - room 25, the Obelisk Control).  A powerful magical suggestion will be secretly placed in the character's subconscious; if this character is present when the group makes it to the obelisk control room, he or she will need to make a save vs spells at -2 to avoid removing the blue crystal and freeing the prisoner.

The plaza of the Obelisk is a dangerous place; the winds that howl across the plaza make it a favorite haunt of the wind demons that scour the glacier.  If a wandering monster is called for while adventurers are at the plaza, there is a 50% chance it will be a wind walker or air elemental.

The obelisk is the prison for an extradimensional entity trapped by the ancient Greys; they used the Obelisk to torture and extract eldritch secrets from the prisoner.  If the characters do find the control room on level 1 and deactivate the Obelisk, the entity will be long gone by the time they return to the surface - it will immediately head into the dungeons below the city and begin gathering its power to free the avatar of the Dark Goddess imprisoned on level 7.  The characters will meet it again on level 7.

There is no treasure beneath the Obelisk.
Posted by John Arendt at 11:07 AM