Review from the vault: Stonehell Dungeon 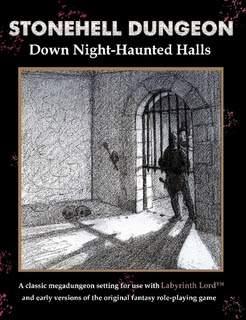 One adventure I've owned for a few years, DMed it, but hadn't formally reviewed on the blog, was Stonehell Dungeon:  Down Night Haunted Halls.  It's one of my favorite OSR products, and The Society of Torch, Pole, and Rope was one of the first blogs I read and followed (long before I became a blogger myself).   There've been signs of life over at Torch, Pole and Rope regarding Stonehell 2, and I'm hoping we'll see it before the year is out.   Plus, the recent chatter on Dreams in the Lich House on megadungeons has me looking back at this product.  Stonehell is one of those cool books I'm always scheming how to build a campaign around it, so this will be one-part review, one-part Gamer ADD brainstorming.

First off, on the rating - it's a 5 of 5 on the Beedometer.  My subjective scheme is basically this:  how does this product compare to my typical home brew stuff?  If I home brew better and could've saved the money, the product isn't getting lauded.  We've had 30 years of meat and potato adventures that cover the basics, so I'm on the look out for things that have never been done.  Luckily, there are plenty of creative folks in the OSR doing just that - breaking new creative ground every day - so there's no lack of quality of stuff.

So that's how I rate things - if a product has opened up a new theme or style, is well written and evocative, or changed how I think about designing an adventure, I'm pumping it up.  Let someone else focus on the latest beginner dungeons - those are valuable and have a place for providing options, but I don't personally need them.  I'll probably go back and recalibrate some past ratings a little tougher as the Beedometer evolves.

The other thing about my reviews - I mostly write reviews about exciting products, products that I've run at the table and want to use, so most of my reviews are slanted towards things on the high end of the Beedometer - the standouts.  Maybe someday I'll put capsule notes and one-liners together regarding the pdf stinkers on my hard drive.  Life's short, though, and writing negative reviews just seems depressing when I've yet to exhaust the great stuff.

But let's get back to Stonehell!  The first thing to notice is the physical layout.  It's a 130+ page monster, all dedicated to a single dungeon, but its designed to have high usability at the table.  It uses a modified version of the one-page-dungeon, so that the pertinent details of each level are on the open left and right pages of the book.  Each quadrant has 30-40 rooms, so that's a lot of information on those two facing pages.  (Each level of the dungeon has 4 quadrants, and there are 5 levels, so there are 20 mid-sized dungeons detailed in Stonehell - at $6.50 for the PDF, that's a lot of dungeon for the dollar!)

The adventure itself is what you'd expect in a traditional dungeon modeled after Castle Greyhawk or the fantastic stories of 1970's megadungeons - there are whimsical locations, humanoid factions, a miniature trade town tucked away in the dungeon, and a fair amount of new monsters, magic items, traps, puzzles and specials.  My high praise of Stonehell has less to do with any one single mind blowing idea, and more to do with scope, sustained high quality, and usability.

Stonehell takes a curious middle ground between detailed set pieces, and leaving some room descriptions sparse to allow for DM improvisation.  The two-page dungeons present the sparse details and memory joggers, providing the DM the opportunity to improvise descriptions.  The intricate set piece locations are detailed in the preceding pages in the level notes.  It's a format that really worked for me - I don't need intricate details on every room, but if there's a macabre arcane machine in a given room with lots of levers and knobs, I'd like to know a little more about how it should be presented.

There had been a healthy debate in the community whether a printed megadungeon was even possible.  Gary never published Castle Greyhawk, after all, and Greyhawk was the pinnacle of what people imagined when they pictured a megadungeon.  Gary claimed to improvise much of the dungeon, using scant notes on a single page next to the map.  There are even photos of Gary DMing Greyhawk in later years, and you can see just how sparse were the notes.  (I'll try to add a pic later when I find one on my other computer).  From that perspective, the one-page-dungeon approach and it's evolution in Stonehell is a spiritual successor to how megadungeons were managed and conceived back in the 1970's.  Very cool!

Alright - this review has gone on long.  I learned over the weekend that one reason my blog sucks is because I'm not writing short posts - Hack and Slash posted "Why *My* blog isn't any good", and I'm sure he meant me personally, j/k.  So in the interests of brevity and appeasing -C, I'll put the rest of the article - brainstorming interesting ways to use Stonehell in a campaign - in another post.