Game report 58, and our third session involving the entrance battle to THE FORGOTTEN TEMPLE OF THARIZDUN.

Let me tell you something I've observed.  You can solve a lot of problems with a wand of fireballs.

Take my players for instance... they find themselves facing a near endless horde of norkers, ogres, and other monsters.  BLAM, fireball.  BLAM BLAM, fireball fireball.  Oh no, more monsters, whatever are we to do?

Last game session was all about ramping up the pressure, as I tried to make the players dig deep...  for more fireballs. 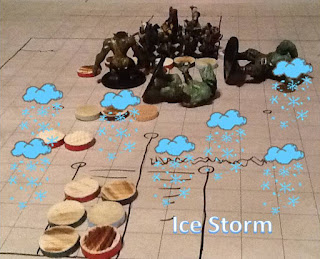 Mister Moore used an Ice Storm to obscure the battle field and create a slippery mess, slowing the assault down.  This allowed the group to successfully pull everyone back into their fighting formation, dropping the trolls with magic missiles. A crew of norkers came double timing up stairs, carrying small casks which they dropped near the top of the stairs - unfortunately, these were casks of oil.  The monsters had a strategy around carrying up casks, and then the next waves of monsters were ogres, which would throw the casks on the party.  It didn't work out so well for the monsters.  You're going to see a little white disc in a lot of pictures, that's what the players used for targeting their fireballs.  I use a grenade type rule, so they're sometimes off center, but the players usually err on the side of "not accidentally frying their front line by missing a mark". 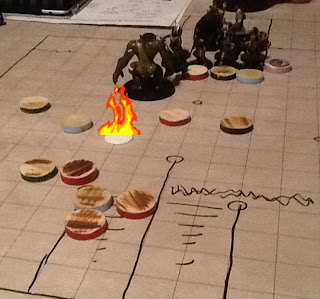 By the time the large group of ogres had arrived, the norkers carrying casks of oil were all gone, the casks failed their saves vs fireball, and there was a bit of a roaring fire off to one side of the stairs.  Most of the ice from the Ice Storm was gone, but it served its purpose.  For the remainder of the battle, the combat was a lot more "traditional".  The four fighters formed a front line - Shy, Leonidas, Phat Kobra, and Forlorn (he usually casts spells, so we often forget he's a 5/5 fighter/magic user).  The clerics stood behind the front line healing, and other characters went farther back, either using missiles against the large opponents or digging for more spells. 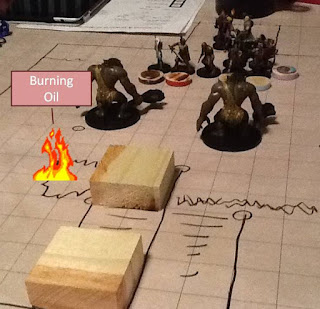 The stairs rattled and the place shook as a titanic bellow let out from downstairs - something big and angry was on the way.  First came a pair of hill giants: 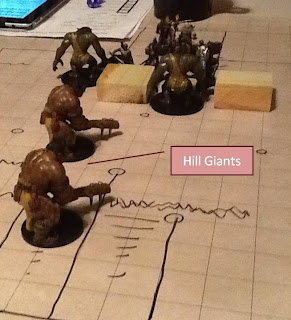 A round or so after the hill giants joined the fight, the leader of the temple's forces, a massive 80hp mountain giant, emerged from the level below.  He barely noticed the fireball coming his way and charged on through.  (I think the mini is from a 4E earth titan; it was one of the bigger giants I had in the box). 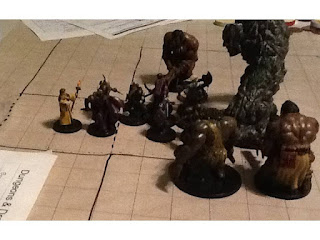 While Moore continued to wash, rinse, repeat with the wand of fireballs, Konstantine had been thumbing through the scrolls until he got to Polymorph Other.  He decided their best chance was to attempt to polymorph the mountain giant into something small - a snail or toad.  It was a big saving throw on the monster side of the battle; the giant needed an 11 or higher to shrug off the spell:

Dang.  The mountain giant was gone, but four more ogres were still coming up the stairs a round or two behind him.  Miraculously, the monsters didn't fail their morale, and kept fighting, but at this point it was pretty much over except for the DM's crying.  Moore softened them up with, yawn, another fireball, before they made it all the way across the room. 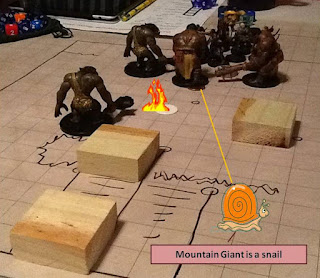 The fight ended soon after a few more inconsequential waves of foot soldiers tried to charge the party, with an 80hp snail slinking around the center of the floor, and only two ogres remaining later into the fight.  The party soon won.  Many jokes were made about how they drained the dungeon of inhabitants and hadn't even made it past the first room. 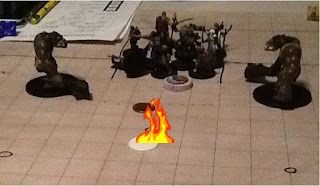 We ended there, but left with an excellent teaser for the next game session.  The party was originally seeking THE LOST CAVERNS OF TSOJCANTH, but they got sidetracked by this quest to help out the gnomes (and entered THE FORGOTTEN TEMPLE OF THARIZDUN).  For their part, the gnomes agreed to patrol the area near THE LOST CAVERNS OF TSOJCANTH.  The party was afraid one of their enemies, a powerful witch, would find it first.

At the end of the game session, a messenger pigeon arrived from the gnomes, explaining how the witch found the caverns the day before and was met by a contingent of gnomish infantry - but we left the actual result of the battle as a cliffhanger, so they don't know if the witch entered the caverns or not.  We're going play the battle out this week with Delta's Book of War skirmish rules.  We'll see how that goes!