Welcome to the SCD - A Campaign for Cthulhu Gaming 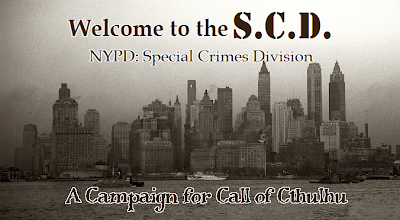 In which the phrase, "Luca Brasi sleeps with the fishes", takes on a wholly different meaning from the Godfather movie.


My Monday blogthulhu posts the past month or so have been promoting a theory on structuring a Cthulhu sandbox to maximize player choice and avoid common problems in horror gaming.  Now it's time to bring it all together in a sample campaign structure.  This is for 1920's or 30's Cthulhu gaming, but the theories behind what makes this type of campaign structure work apply to historical and weird horror gaming in other periods, as well.

The Campaign
It's the 1920's in the Big Apple - gangsters, prohibition, the jazz age, and the Harlem Renaissance.  But even on the mean streets of the city, there are some crimes that defy explanation, some events that can't be solved through conventional policework.  When New York's Finest and the suits at One Police Plaza are confronted with bizarre enigmas and mysteries, those cases get shuffled to the NYPD's Special Crimes Division - the SCD - and their set of dusty offices down near the archives.

Special Crimes is an unpopular assignment with the rank and file; folks that make detective there get stuck on long assignments and rarely make sergeant or lieutenant in the boroughs or precincts.  Detectives in the division don't exactly buck for promotions, either.  It's a close knit group with a lot of secrets, and officers get a bit distant after they've experienced a few SCD cases, as if they've seen too much.  The chief has tried to have the division closed a number of times, but the commissioner keeps it open, and there's someone in the mayor's office that has a vested interest in the group.

The Big Apple attracts all sorts of creeps and cultists; sorcerers seeking forbidden tomes, high society dabblers in forbidden magic, decadent art collectors, crazed wizards, and blasphemous deep one cults among the shady crews near the docks.  Somebody has got to stop all these nutcases from calling down their ancient horrors, and that group is the SCD.

Characters
Players in the campaign take on the role of detectives in the SCD and the various contractors that work with the police.  The great thing about the police procedural genre is there are always contractors and adjuncts to the department getting pulled into cases.  Because of the occult nature of SCD's cases, the department employs psychics, sketch artists, hard-boiled private detectives, a local priest, and even a few scholarly professors, for those times when they recover indecipherable eldritch books or strange relics.  A psychologist might be a regular consultant for profiling perpetrators.  A nosy reporter or journalist could be in on the secret, helping to piece together clues while keeping the horrible truths off the front page.  Players will have some wide open choices.

NPCs and Organizations
A campaign like this will have a ton of familiar, recurring NPCs; you've got all the folks in and around the NYPD, the political side of the force, characters like the commissioner, the chief, and the lieutenant in charge of SCD.  There's constant pressure to stop the bad guys while hiding the truth.  Then there's the folks that support the genre, archetypes we can borrow from Film Noir like the street pigeon, the cop on the take, the femme fatale, the gangsters, and the movers and shakers in New York society.

There are a lot of interesting organizations that can be worked into a New York city-based campaign.  The Fate (from the Delta Green setting) has existed for centuries in New York, so I'm sure there's a 1920's version that can be used as a secret power behind the streets.  Organized crime will be a big influence.  I'll probably transplant the Hermetic Order of the Silver Twilight from Boston to New York and put that occult society in the background.  There might even be a government branch related to Project Covenant that could be an erstwhile ally from time to time.

Themes
This campaign uses two Cthulhu gaming themes from the D20 book - Hometown Heroes and Badges and Guns.  New York is big, but the cast of characters will be small enough that the Five Boroughs (hah - five Burroughs) and their varied neighborhoods will become familiar, with locations and regulars that recur over time, like the university and its library stuff, the denizens of the favorite pub, the coroner, and the beat reporters for the daily news.

Badges and Guns gives the players a bit of formal authority and the power to bring legal and governmental resources to bear, but constrains them in other ways - like the pressure to keep their exploits off the front page of the newspapers, and to get things done quietly without embarrassing the mayor.

Solving Common Problems
Let's look at how this structure solves some common problems with Cthulhu gaming.

Active Plot Hooks
One of my biggest gripes with most published scenarios are passive plot hooks; plot hooks that are related to the character's relationships and backgrounds, and not their jobs or activities.  The first problem solved by an organization like the SCD is that it provides a funnel for active plot hooks.  There's a backlog of cases, and the Keeper can introduce new crimes all the time, because the organization is actively taking on cases that fit the occult profile.  It's The X-files for the Five Boroughs.

Target Rich Gaming
The second benefit of the plot hook input funnel is what I call target rich horror gaming; there may be one or two high profile cases at any given time, but there's also a backlog of unsolved cases in the player's hands.  This is the top level of player agency, the opportunity to prioritize and pick and choose from a couple of different options.  It may not mirror how a real life department would work, where priorities are usually set by superiors, but choice is important to how I run games.  The players aren't puppets and they'll get to pick most of their assignments.

The next level of agency is making the actual investigations themselves non-linear, with clouds of clues and multiple paths of victory.  This one's all on the Keeper.

Replacement Characters
The last benefit of a campaign structure like the SCD is easy replacement characters.  By tying plot hooks to the activities of the organization, individual characters can come and go if the death toll or sanity loss mounts.  The campaign keeps chugging along.

Open Questions
I've been thinking this would be a 1920's game, but there are some compelling reasons to consider advancing the timeline to the 1930's.  I get to assume all of Lovecraft's 1920's stories are true and actually happened in the campaign's past; this lets me play with aftershocks, perhaps moving some of the key players to the city.  The rise of the fascist dictatorships in Europe means I can have Nazi agents in the city looking to carry out Hitler's occult agenda - robbing the Natural History Museum or raiding a private collection.  The players can be there for the forming of the early Karotechia.  However, by moving out of the 20's, I lose the charm of the prohibition era, with its gangsters, speakeasies, and glitzy jazz music.

The other open question is whether I should use Trail of Cthulhu or Call of Cthulhu.  Trail would work really well for a game based on police procedurals; the Trail skill system supports ultra-competent investigators.  But I'll put it to a vote - the players would probably prefer COC style character attributes and dice rolling.

There's an official Chaosium supplement for the city, Secrets of New York - that's going to the top of the reading list.  Miskatonic River Press has been threatening to release some New York based scenarios for a while, so that would be an immediate add, too.  I'm going to work my way through the various Chaosium collections looking for earlier scenarios that would work well in the city.  I'll also be skimming some of the Trail collections for suitable investigations, like Arkham Detective Tales, Stunning Eldritch Tales, and Shadows Over Filmland.


Readers:  if you have favorite scenarios that you think would work well in New York, I'd be grateful for recommendations!  I'd also like to hear any thoughts about using the 1920's versus the 1930's for this kind of game.  I have no problem replacing the plot hooks, transplanting a mansion scenario to an urban brownstone, that kind of stuff; I'd never run something as is.

I have some time to get the details of this campaign together - we've got plenty in the queue for the AD&D game before having an opening to start some Cthulhu one-shots, probably in April.  I like that this campaign could be episodic, with short adventures - we could do an investigation every few months for a change of pace, continue the regular D&D campaign, and then run another SCD one-shot in between major D&D stories whenever I need to scratch the COC itch.

Now I just need to find a great kick-off scenario.