Review: The Stealer of Children 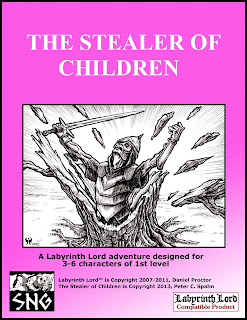 I had the chance to read a review copy of The Stealer of Children, written by Peter Spahn of Small Niche Games.  I've enjoyed Pete's work in the past, and with a name like "Stealer of Children", I had to think this one had the potential for some horror, so immediately prioritized it to the top of the reading list.  Here's a brief review, seeing as it was just released, and it's available at the usual suspects:  The Stealer of Children at RPGnow.

In order to do the review justice, there will be spoilers.  Go ahead and skip if you expect your referee to be buying this one sometime soon.

I enjoy reviewing several pieces from the same author over time, and getting the chance to see the author's style and voice revealed over successive works.  Pete Spahn's formula has involved presenting a detailed area, lots of NPC's with varied motivations and interactions, and a set of events running in the background; if the player characters don't do anything, things are going to unfold with or without them.    There was a similar structure in both Inn of Last Heroes and Blood Moon Rising, two adventures I reviewed sometime ago.  I like to run the sandbox with some parallel events going on in the background, as it helps put the campaign world into motion, so this is a structure I enjoy quite a bit.

The overall arc in The Stealer of Children is likely to unfold in this way; an ancient evil has awakened near a small village, and children begin to go missing - they've been taken.  It's quite likely the players explored the evil lair at the outset, and noted that it was empty.  If they return a second time, the enemy is there now, but is essentially invulnerable.  Only after completing a suitable side-quest (and the interesting twist that ensues) will the party be capable of winning through the final confrontation.

Many OSR writers have eschewed fairy tales and folklore for weirder blends of sci fantasy and outré horror; (hey, I'm especially guilty).  This one unfolds like a folk tale and has many classic elements; the monster itself is an evil fairy like "the boogeyman", with the kinds of vulnerabilities you'd expect from a fairy tale monster, and the need for a heroes quest.  As such, I think this one would work especially well with younger gamers; because it involves the predations of a fairy monster against ordinary villagers (and their children), you could dial up the horror for an older group by escalating the pace at which children are snatched and eaten.

The adventure itself is short, and involves only a few combat encounters - it's ideal for 1st or 2nd level characters as an introductory adventure.  I'd expect this to be played over 1-2 nights.  There is a blend of investigation and interviews, interactions with NPCs, and even a potential wilderness trek, that keep the play experience varied and interesting.  The small village featured in the module, Leandras Row, has plot hooks  for additional adventuring and could function as a nice home base.

The book is 26 pages, with minimal art and a simple layout.  The pink cover makes me cringe, but I'll try not to hold that against the author.  I really enjoyed this one and definitely see it in our rotation for use with the kids in the near future; if you're interested in folklores and fairy tales for your game, an under-used theme, this is a nice one to try out, as it reflects that atmosphere quite well - I recommend it.