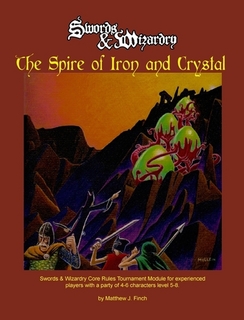 Here's a nice story.  It was a few summers ago, I was heading out to Gencon for the first time, and I had decided to run The Spire of Iron and Crystal at Gencon as a scheduled event, using the Swords & Wizardry (complete) rules.  It's a fantastic adventure, and I was looking forward to running a couple of groups through it to see how they did.  It's a strange adventure, with plenty of interesting puzzles.

At the time, Matt and Frog God Games were just getting started with their team up, but when they heard about my events, they sent a (free) copy of the module and a copy of the complete rules to help the cause.  Very cool.

I've managed to rate and review a fair number of adventures over the past few years, and since my opinions change over time, I sometimes shift ratings around when my perspective changes.  The Spire of Iron and Crystal has always kept the top spot on my personal scale, the Beedometer.   The Spire exemplifies the free wheeling creativity enabled by rules such as S&W.  It showed me how awesome can be a blend of fantasy and weird sci fi elements, and it inspired me much more than the Barrier Peaks.  It's an adventure that exudes Heavy Metal Magazine and Omni and 1970's Roger Dean Yes Albums.  It's full of things to push, prod, and pull; levers and dials to turn, tokens to insert into machines, and otherworldly mutants and evolutionary weirdos.  Perhaps my highest praise:  there are many elements in the Black City campaign that owe a spiritual debt to The Spire.

So that's my story - it's truly just a short S&W appreciation post and a shout out to those guys to keep on trucking.  If you've somehow missed out on this adventure, what are you waiting for - the Frog Gods have it over on their site as an inexpensive pdf (link to store:  The Spire of Iron and Crystal), and there's even a 25% discount today (coupon: SWApprDay).  This one is a real old school treasure.


Links & Notes:
In case someone is wondering, "What is this Swords & Wizardry of which you speak?"

Swords & Wizardry is a retroclone of the Original 1974 D&D rules published under the OGL.  It was created by Matt Finch, and is presented these days in nice hardcovers by Frog God Games.  Matt is also known for some quirky and excellent old school adventures like the one featured here, and The Quick Primer for Old School Gaming.  Frog God Games is a publisher that evolved from the 3E era publisher Necromancer Games to lead a number of large and successful projects for Pathfinder and S&W.  S&W Appreciation Day was organized by Tenkar over at Tenkar's Tavern.