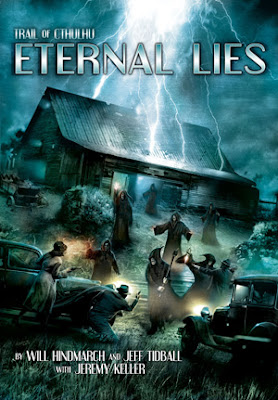 I love campaigns for Call of Cthulhu.  Since the early 1980's, one of Chaosium's advantages was putting together those campaign-length, multi-stage horror investigations like Shadows of Yog Sothoth, Masks of Nyarlathotep, Brotherhood of the Beast, and many more.  The upcoming publication of Eternal Lies, from Pelgrane Press, is a clear statement that Trail of Cthulhu is not only going to deliver the same kind of epic experiences, but they're going to continue to refine the form and push adventure writing into new places.

After spending the past few weeks reading this 400 page monster, Pelgrane has far exceeded my expectations.

Let me start by saying that Eternal Lies is the latest work I've seen that takes a self-referential approach to the "Cthulhu investigation genre".  A group of investigators, much like your typical 1920's Call of Cthulhu characters, failed spectacularly at disrupting a cult summoning in the year 1924.  (I believe the cover image up there shows the 1920's guys about to get handed their rear-ends).  Shattered and disbanded, the few survivors have malingered in the asylum or home care, unable to come to terms with the horrors they experienced all those years ago.  (I've known some PC's that ended up like that, too).

Now it's more than 10 years later.  A wealthy patron hires a diverse set of characters to investigate the affairs of her late-father, who was never the same man after a mysterious event in 1924 (the botched Cthulhu investigation referenced above).  Starting with a pair of simple interviews at an asylum in the deep South, the campaign quickly thrusts the player characters into planning a series of world-spanning explorations that take them from a South East Asian pit fighting arena (ala Blood Sport), to the deserts of the Great Rift Valley, the jungles of the Yucatan, even to the peaks of Tibet.

Masks of Nyarlathotep is arguably the greatest Cthulhu campaign (it certainly headlines most of the discussions), and this campaign is a descendant and successor in a few of key ways.  It involves a world-spanning cult with unique, local iterations and challenges, much the way the cults in Masks are facets of a whole.  More importantly, the early locales give the players enough pointers to the global destinations that the players can prosecute their investigation of the cult in any order.  That right there is the classic Masks structure.

The overarching theme of Eternal Lies is corruption, and the adventure does a fantastic job of grinding stability and sanity from the investigators and threatening them with effects that corrupt their character's thoughts, souls, and ultimately, their physical bodies.  It wouldn't be surprising if one investigator ended up in the asylum, only capable of babbling incoherently in "the Tongue of Lies"; a second is forced to assume the ascetic life of a monk; while the third spends their remaining days covered up in heavy clothing, unwilling to show the mouth-like growths that grew on their forearms and must remain forever gagged lest they spout gibberish from beneath the sleeves.  Of course, that character could choose... amputation.  Gruesome stuff.  I'd anticipate a high body count and a fair amount of investigator "turnover" over the course of this particular campaign.

I'm not going to spoil the identity of the godlike horror behind the cult, nor discuss much about the end of Eternal Lies.  The identity of "the Liar from Beyond", the object of the cult's veneration, is one of the central mysteries of the campaign.  The ending holds plenty of surprises and twists that should be saved for play.  I'm satisfied with how it concludes.  Longtime fans of the genre will guess the identity of the "the Liar" long before the ending.  They'll still be unsettled by the twists before the final credits roll.

The rules set is Trail of Cthulhu.  Trail uses a resource management approach such that players are constantly making choices to deplete their resources (and have an easier time in the early going) but risk needing those resources later and having a tougher time.  Depending on your point of view, the resource system is either designed to give players equal spotlight time, or challenge group planning and strategy with resource management - game-style.  The authors do a good job of addressing both philosophies, with frequent "antagonist reactions" that maintain pressure on resources.  As the first Trail of Cthulhu published setting, the campaign includes advice on managing character Drives, Pillars of Sanity, resource pool refreshes, pacing, along with the aforementioned antagonist reactions.  The presence of Drives and Pillars of Sanity are important factors that tether the characters to their regular, day-to-day lives back home.  They're one of the important differentiators in Trail of Cthulhu, so it's nice to see them featured prominently in the campaign.

Eternal Lies is 400 pages, divided into 9 separate adventures.  Playing once a week, I'm thinking it'd be a 6-8 month endeavor to run this end-to-end.  Or longer.  Since I preordered, I've been reading the black & white PDF, with layout and art; the hardcover should be available later this summer.  You may still be able to preorder here:  Eternal Lies.

I'm on my second read-through.  This is an excellent campaign, highly recommended, which confronts the players with a diverse series of locales and investigation types, while showing off the strengths of the Trail of Cthulhu rules set (ie, Gumshoe).  I imagine a fan-conversion to Call of Cthulhu will be along shortly after publication.  Eternal Lies is right at the top of my queue for next games to run, and I plan to kick it off as a regular game as soon as we wrap up our current thing (probably early August).  Unfortunately, this one is on the mature side; the cults the players investigate involve plenty of drugs, sex, violence, drugs, violence, sex, and more drugs.  And big freaky mouths that try to eat you.  We won't be letting our younger players in on this particular campaign.

I may not be able to hold out for the hardcover edition, and could need to start running it off the pre-order PDF.  Now, if I were really lucky, some kind-hearted Pelgrane chap would pop in over here and let us know it would be ready for Gencon and that I can pick up a copy right there at the Pelgrane Booth, like Night's Black Agents last year.  Sometimes the stars are right.
Posted by John Arendt at 6:00 AM