The Age of Monsters 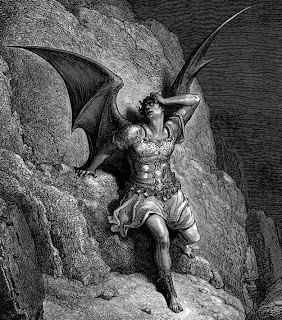 There were Giants in the earth in those days.
Genesis 6:4

We frequently point out that Dungeons & Dragons and OSR games are essentially post-apocalyptic.  The assumed setting postulates a world where ruins point to a glorious past, and those crumbling places are littered with magic and treasures created in the bygone age.  The default approach seems to be Western European, suggesting the fallen empire is an analog to Rome and the current benighted state of man is something akin to the Dark Ages...err, Late Antiquity or the Early Middle Ages.  ("Dark Ages" is how I learned it back in the day.)

I love antiquity and the Roman period, so how would you create a post-apocalyptic predecessor to the ancient world?

Luckily for us, the ancient world comes gift-wrapped with its own apocalypse, called "the Biblical Flood".  *That flood*, the one with Noah, Mount Ararat, the Ark, and the Judeo-Christian deity sweeping away a corrupt age.  There are permutations of the flood myth throughout near-Eastern mythology such as the stories of Deucalion or Utnapishtim.  When you look at it closely, that pre-flood world could easily be turned into a typical Swords & Sorcery setting with corrupt city states and decadent sorcerers, replete with some awesome megadungeon ideas already built in, too.

And Azazel taught men to make swords and knives and shields and breastplates; and made known to them the metals [of the earth] and the art of working them; and bracelets and ornaments; and the use of antimony and the beautifying of the eyelids; and all kinds of costly stones and all colouring tinctures. And there arose much godlessness, and they committed fornication, and they were led astray and became corrupt in all their ways.
1 Enoch 8:1–3

The Biblical flood is preceded by this period where a number of celestial beings - in the story, they're angels called 'The Watchers' - abandon their role as observers and start showing people all sorts of things - how to make weapons, how to use magic, how to read the stars and skies, and since they father a race of supernatural beings (the Nephilim) there is definitely some hanky panky involved, too.  What the ancient writers called "angels" could just as easily be extra-dimensional beings or aliens for our purposes.  (I hear Babylonian art is full of ancient astronaut symbology).  These accounts are folklore stories that provide total license to place demi-godlike super men, or the hideous offspring of pan-dimensional ultraterrestrials, ruling over corrupt city states and wielding forbidden magics and waging war on each other like ravenous beasts.

The apocryphal stories have a bunch of good angels, led by Raphael, come down and smack around the fallen, chaining them deep underground until Judgment day in Tartarus:

And the angels who did not keep their positions of authority but abandoned their proper dwelling--these he has kept in darkness, bound with everlasting chains for judgment on the great day.
Jude 1:6

Finally, there's a real-world geographic location where all this excitement takes place, which is traditionally identified as Mount Hermon, the mountain of the oath, a series of peaks in Syria.  Mount Hermon also figures into the Epic of Gilgamesh.  Mount Hermon is a rich archaeological site, with numerous ruined temples and holy sites littering the slopes, including a reputed Palace of Baal.

So here's the elevator pitch:  In  the ancient, pre-Roman world, powerful beings from beyond teach early humans all sorts of forbidden arts like metallurgy and magic, they establish palaces and dungeons within Mount Hermon, they set themselves up to be worshiped, and they father a race of monstrous tyrant overlords that dominate the region. Its was an age undreamed of.  Other beings from beyond eventually come along, imprison the transgressors deep beneath the ground, and instigate a massive flood that wipes out the ancient near-Eastern civilizations, 'cleansing the world' of the previous ills.  Humanity civilization rises from the ruins, but the lost hollows and hidden ways beneath Mount Hermon still contain the artifacts and monsters dating back to the antediluvian world.

I already mentioned that the otherworldly beings don't need to be divine angels in the Judeo-Christian sense; they could be dimensional travelers or aliens from a distant galaxy.  Their offspring could be supermen or horrible monsters.  For instance, lurking behind the Hellboy universe are the Ogdru Jahad and Ogdru Hem, Lovecraftian Great Old Ones and sleeping terrors, that trace their origins back to the fallen watchers similar to the Book of Enoch.  So you can get your whole tentacled-aberration-great-old-one thing going as well.  What matters is you've got a story involving forbidden sorceries and eldritch arts dating back to a sophisticated, fallen world, predating antiquity, complete with its own built-in apocalypse (the Flood) and imprisonment of the great evils beneath the earth, where surely they'll be chained on the lowest level of the dungeon until adventurers stumble along.  The dungeons and ruins would also contain remnants of the ancient religions, forbidden tomes, and the arcane wonders of the bygone age.

I'd want to investigate Roman history and find a time when Syria was a Roman frontier or home to some Roman outposts, so you could have frontier trading posts and towns to act as a home base for explorers sojourning beneath the mountain.  Alternatively, you could build a home-brew modeled on antiquity or borrow something like the Hollow World (an old Swords & Sorcery styled setting for Mystara).  But the strength of the campaign idea is basing it on real-world folklore and borrowing from other near-Eastern myth cycles like the Epic of Gilgamesh.  I'd be loath to start from scratch.

Most of the time I'm brainstorming how to do horror-themed dungeons in a low-magic real world setting in the early modern; by placing the adventures in a much earlier time, it feels less constrained introducing a higher degree of fantasy and magic so it looks more in-line with baseline D&D without restrictions.  There's another source of inspiration as well:  I'm still working my way through The Black Company series by Glen Cook, and I love how the books feature ancient horrors and old religions (many times not fully understood by the modern practitioners) resurfacing in the current age.