We're back from another annual sojourn to Indianapolis.  This year was a lot different for me; over the winter, my oldest son became strongly interested in Magic, and since  I was a card player "back in the day", we've been going to Friday Night Magic fairly religiously for the past 4-5 months.  We made playing in tournaments a big focus for this year's Gencon.  Nonetheless, we did wander around (a little bit).

D&D NEXT
I had drifted from downloading the WOTC playtest packets of D&D next, so our group was excited to get into one of the playtest sessions.  Overall, it was a fun playtest and the action moved along quickly - I was Spock the Elf, a few guys were named Red Shirt 1 and 2, and the star of the night was Sulu, the monk who embodied the drunken master style.  Combat was abstract and fast-moving, and had quite a bit to endear it to the old school crowd.  No need for minis or grids or excruciating tactical movement.  The action was fast and furious.  Thought the combat was great.

On the other hand, it still has clerics with searing laser-pointer-fingers and wizard characters that shoot fearsome magical blasts every single round like the Gauntlet video game.  I don't know enough about 5E to say whether only the player characters are the special unique snowflakes that walk around with such reality-bending powers of destruction at 1st level, or whether the entire implied setting is like an over-the-top high magic comic book.   I have a hard time envisioning a class-based world, with sensible demographics, where characters with such flashy powers rub shoulders with ordinary folks, but it could be an interesting thought exercise to imagine a place where a plurality of characters float around and can blast things at will.  To try and rationalize how society functions with such powerful individual characters,  I keep coming back to the Marvel or DC universes and the comics.

Anyway, it sounds like the multiple years of play testing is coming to an end this fall, so perhaps WOTC has it figured out.  I loathed 4E as a world-building system, and I'm strongly suspicious of 5E due to the character power levels (but I'm not writing it completely off, either).  We'll see.

There were multiple times we found ourselves wandering by the gigantic Pathfinder hall late at night on our way to the parking garage, and couldn't believe how packed it was around the clock.  There are no edition wars; Pathfinder has won, plain and simple.  It's all over but the crying - the anemic D&D Next crowd isn't any competition.  At least WOTC keeps doing one thing right (Magic, below).

HOBOMANCER
While four of us spent time in the Magic Hall grinding out games, a couple of the guys wandered the RPG areas trying to find pick-up games, and they came back from one such venture as devotees of the cult of Hobomancer.  Apparently, Hobomancer (an actual, real, I'm-not-kidding RPG) involves a secret society of 1930's era magic-wielding Hobos, fighting to save the American Dream while riding the rails, calling on such uncanny skills as Beard-Magic or Stinkomancy or the Shakes.  Despite the absurdity, a couple of the guys are all in on the Hobomancer now, particularly after playing through an intro scenario, "The Town That Loved Hobos".  One of the players kept wearing his "My Name is Harmonica Jones" name tag for the rest of the con.  I have a suspicion  that getting roped into a bizarre one-shot play test and embracing some silliness is now lurking in my future.

STUFF TO GET
Last month I wrote a review of Eternal Lies, the upcoming campaign for Trail of Cthulhu.  The book was on sale at Gencon and I picked up my pre-order copy - it's massive and spectacular.  This is probably next in the gaming queue unless we get back to some fantasy gaming as the season turns to autumn.  Either way, I'd like to start this one before the year is out - it looks challenging and fun. 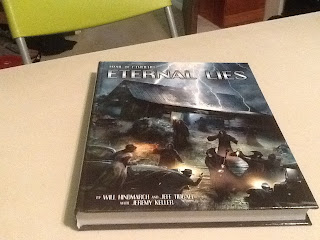 MY MANA-SOAKED BRAIN
We've been "winning" (or at least going 3-0) at just about every FNM draft or constructed we attend, so I was looking forward to playing a diverse and competitive field at Gencon.  Plus, the kiddo wants to start attending some larger tournaments in the area, and needs seasoning (he's 11).  It's funny how many 'serious' players figure it's an auto-win when they sit down across from a goofy kid (in a Legend of Zelda Lync costume, no doubt) and get surprised when his Domri Naya beats down with the Thundermaws.

I was on Jund for the weekend and got knocked out of a top 8 on day one due to some really questionable opening hand keeps on my part.  That was my wake up call that you needed to make strong technical decisions and the margin for error was much lower than the local scene.  Sometimes you just need to get punished to learn.  On day two, the boy changed up his Naya deck for R/G Dragonmaster Aggro (after a dealer-hall quest for a 4th copy of Burning Earth in the board) and we played in a standard grinder to win a box.  He beat an American Flash deck before getting combo'ed out by the Black-White Humans deck (with Blood Artist triggers), while I beat that deck in the finals to win the box - it turns out Curse of Death's Hold and Olivia Voldaren are pretty good against tokens and humans.

The kid really shined in Sealed Deck, getting 4th place in a large 72-person sealed (I was merely 20th), and then winning a sealed grinder outright.  I played him in one of the games; he dropped his Kalonian Hydra, swung next turn for 8.  Swung on the following turn for 16 (the Kalonian doubles its power every turn).  Meanwhile, I was holding Act of Treason and chump blocking just enough to stay alive.  I stole his Hydra for a turn, swung for 32 damage lethal, and he calmly played his final card - a Fog spell - and took his hydra back with a slight smirk.  Funny stuff.  Needless to say, I didn't survive the 64 power crack back - Kalonian is a bomb.  On the last game of that match, there was no stopping his Vampire Warlord with Mark of the Vampire and an endless supply of sacrifices to keep regenerating it.  It just kept beating down. 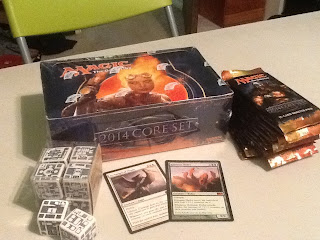 I've been thinking about starting a Magic blog to catalog our quest to graduate from FNM heroes and join the spawning masses trying to land in the money of an SCG Open or top-8 a PTQ by navigating the ever-changing standard meta.  (Hah - If you're reading this and can even wade through that jargon, let me know if that's remotely interesting.)

Back to regular RPG posts this week.
Posted by John Arendt at 4:07 PM