Another Look at Lamentations of the Flame Princess 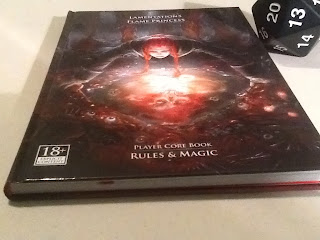 I've been meaning to circle back to the topic of the Lamentations of the Flame Princess (LOTFP) rules set for a discussion.  We've kept it as the default rules for the Black City campaign, and I ran the first half of the previous campaign (Gothic Greyhawk) using the same rules as well.  Since one can get a legal PDF copy of the Moldvay edition of the D&D basic rules nowadays, you might wonder why I've stayed with a simulacrum.

The LOTFP book line features adventures that have a lot more horror content than typical fantasy adventures; a few feature graphic art or gruesome themes.  The (implied) default setting for many of the adventures and rules is the Early Modern period rather than a Feudal or Medieval period.  The rules themselves build off of classic D&D, but the magic has been toned down to seem more literary than the comic book style approach of default D&D, with flying men shooting at each other.  (D&D magic has pretty much carved out its own genre of fantasy after almost 40 years).  If you want to check out the LOTFP rules, a free copy of the rules is available at RPG Now.

The quality of the LOTFP printed books has been trending upward.  The last thing I received from the publisher was the hardcover printing (pictured above).  But look how tiny that hardcover looks compared to that d20!  You need a magnifying glass to read anything.  Just kidding, that's a giant sized d20 - you can read the rules fine -but the book size is smaller than the US custom - A5 print size.

There are many choices in OSR rules, not to mention the availability of the original TSR rules I mentioned.  Here's what I continue to like about the LOTFP version:

Skill System
The Moldvay Basic edition has an implied d6 skill mechanic recurring through the rules - d6 is used for hear noise, secret doors, surprise, triggering traps, and so on.  The LOTFP rules extend the d6 mechanic to cover a lot more common adventuring tasks and demi human abilities.  I like the simple, consistent mechanic.

The Thief (Specialist)
The LOTFP version of the Thief is now called the Specialist, and the thief type skills have been converted to d6's, aligning them with the demi human abilities and other adventuring skills.  (I never liked the percentage roll mechanic).  More importantly, the Thief gets to allocate his or her own points, allowing him to do some things extremely well, even at first level .  A new Thief could put 3-4 points into "tinker",  allowing a 50% or more chance to succeed at picking locks and disabling traps.  The TSR version of the class wouldn't have a 50% or higher chance until beyond 7th level - an eternity in dog years (or game time).  Of course, the traditional version of the class is well-rounded - the 1st level Thief has a 10-15% across 6 or so abilities, making him or her incompetent across all the skills equally.  I'd rather have a character than can do one or two things well, even at first level.

The flexibility of the Thief skill system is the number one reason I use this rules set - it's my favorite innovation.  I realize 2nd Edition AD&D went this path, but I like the simplicity of d6 skills on a Moldvay style D&D chassis.  The skill system is also modular and easy to extend the number of skills, allowing the class to represent other professions.  In The Black City campaign, I've added skills for Lore and Performance so that Skalds and Bards are also represented by the Specialist.

I'm still waiting for a player in my game to make a Specialist loaded with Climb, Sneak Attack, and Stealth, running around like an Assassin's Creed style parkour expert.  It could be done pretty easily and would be a ton of fun.  You could totally do it with this type of class.

Character Class Alterations
There are subtle changes to all of the character classes.  Fighters are the only characters that increase in fighting ability, and they gain some unique combat options and tactics.  Clerics lose Turn Undead as an ability; it's now a 1st level spell.  Neither Clerics or Magic Users are limited in their weapon choices (although spell casting for Magic Users is still constrained by heavy armor).  The unique capabilities of the demi humans have all been pushed slightly, strengthening their identity - Dwarves are tougher and hardier, Halflings are sneakier, and Elves are elfier.

Magic has been toned down - spells that are extremely flashy or difficult to explain in a real-world setting are removed.  No more flying Magic Users battling in the air with Lightning Bolts, Dr Strange style… and you can't go to the local church and buy a Raise Dead spell every time someone dies, either.  Experience points for Magic Users and Elves have been adjusted down slightly to account for their diminished fire power.

Combat Options
A number of simple combat options have been formalized, like Press (full out attack), Defensive Fighting, and Parry.  The suggested initiative system is "individual initiative", which leads to a more chaotic style of melee.  There are some adjustments to missile fire, an aim rule, and firing into melee.  Otherwise, combat runs much like TSR versions of classic D&D.

Design Repercussions
The changes to the Fighter and the power level of spells has repercussions to how one designs encounters and adventures.  Here are some observations from running the game for dungeon style adventures for the past few years.

First, because the other classes don't advance in fighting ability, scaling the armor class of monsters and opponents with level is a bad idea.  Adventures for this rules set often cover a much wider range of levels because there isn't such a tightly bound "sweet spot" - you often see things like "for levels 1-8" because combat is only one dimension to an exploration game.  As long as you understand this relationship between combat ability and opponent armor class, there's less concern about game balance here versus traditional adventure designs that have to account for the exponential power of wizards or the difficulty of challenging characters loaded with magic items and AC buffs.  Lower level parties absolutely need retainers to help with the front line fighting - but that goes with most old school systems.

The overall damage output of a party doesn't scale as in types of D&D - Magic Users don't have as many mass effect damage spells, and Fighters don't get weapon specialization or similar buffs.  I'd urge catuion about putting many high hit point monsters against a party, as in classic D&D.  Fights will turn quickly into attrition grinds.  Large battles with tough monsters, like G1-3 Against the Giants, would be a rough experience if run using the LOTFP rules.

Undead become excellent horror-oriented monsters under these rules, since it's much harder to nuke the whole monster type just by having a powerful Cleric along.  (That's another case where having a character above the recommended level hoses a traditional adventure module).  Choosing to take Turn Undead instead of other level 1 spells becomes a legitimate resource choice and not an every encounter freebie.

The lower powered rules set compliments my preference of putting campaigns in a real world or pseudo real world setting.

House Rules
There are a few house rules we've been using.  We use a first aid\bind wounds type of rule after combat; I allow a two-weapon fighting variant (where the off-hand weapon either provides a minor attack or defense bonus).  For natural 20's, the current 'critical hit' rule is that the player treats the damage roll as the maximum value (so a critical using a sword deals 8 damage instead of 1-8).  One other thing I've used as a treasure reward is "adamant weaponry", extremely sharp blade weapons that give a bonus to hit, but not to damage.  This has allowed some of the non-fighter classes like Dwarves or Elves to improve their chances against some of the hard to hit monsters.

There is one major change I've considered but haven't pulled the trigger.  I've been meaning to take a closer look at OD&D and explore how it used the d6 for hit points and weapon damage, and see if that would work here.  The simplicity of "nothing but d6's" is intriguing.  For instance, I'd love to be able to track monster hit points by rolling a giant pile of d6's at the start of a combat, and ticking them off on the dice directly.  One can dream!
Posted by John Arendt at 7:27 AM