Taenarum gets the ACKS 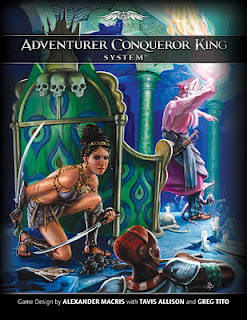 I ran the first session of the new megadungeon last night.  With any luck, I'll get a second group of players in there tonight, and it will be completely underway.

Last night was the kids and family game.  They made characters with such names as Egrog the Spartan Gladiator, Holly the (Christmas)Elf, Leonidas the Paladin, Starbuck the prophet of Apollo, and Matthias the Athenian Magic User.  For this game, I picked the Adventurer Conqueror King system (ACKS), one of the old school clones, for  one main reason:  world building.  ACKS has extensive guidelines on world building - demographics, markets, armies, all of it.  I plan on making a giant hex map of Mythic Greece and statting out all the major city states using ACKS demographic factors.  I love classical mythology and it seems like a perfect place for characters to rise in power and carve out their own kingdoms.  I'm expecting this to be the default family game setting for years.

ACKS also has an extensive set of templates for the character classes, and this made character creation with newbies a snap.  Templates are character concepts - a fighter could be a mercenary, guardsman, gladiator, legionary, and so on.  The template provides some pre-selected gear and proficiencies.  So the kiddos rolled statistics, arranged them, picked a template, we gave them the default gear, and we were off fairly quickly.

At this point, I have levels 1 and 2 of the dungeon mapped and annotated - around 200 rooms.  Level 3 is mapped and randomly stocked, but needs a lot of work on harmonizing the results, and level 4 maps are underway.  The peninsula is loosely described, and the home base is well detailed.  They're starting in the little village of Psammathous Bay.

I have a confession though.  I miss the horror.  I'm writing descriptions for dungeon bosses like the Zombie Master, and putting in a stitching room where he builds mutant zombies by stitching body parts together to make 3-armed zombies with too many legs and multiple heads, and then I have to catch myself.  This is for the kids.  I feel like Jack Skellington trying to be Santa Claus.  "What is this uncomfortable feeling I'm chasing after?  Oh yeah, that's what it's called… whimsy."

We'll see if I'm capable of whimsy.  I'm still worried that instead of a jack-in-the-box, I'd deliver a decapitated head in the box, but here's hoping.  Awareness is half the battle, amiright?  I'll need to keep writing Harrow Home or the Black City on the side just for an outlet.  Maybe I'll go review some of the new LOTFP stuff.

What would the readers like to see on the blog about Taenarum?  Maps and guides to the levels as we encounter them?  I'll definitely post game reports.  I've never had multiple groups in the same dungeon - it should be really interesting.  It's downright GYGAXIAN.  One thing I'm considering is posting a weekly map showing what the other group explored, so the next group doesn't waste their session going over the same territory (unless they want it that way).  I plan on building a restocking approach for each level, but at least the groups would know where to start fresh each week.  There's an adventurer's guild hall back in Psammathous Bay, and we can create a rule that assumes they're leaving notes for each other back at the guild hall.  I saw something similar when reading about the West Marches campaign a few years ago, and it seemed to work well for having multiple groups in the same locale on different game nights.
Posted by John Arendt at 8:08 AM