I've had trouble keeping my mind on gaming lately.  I started a sizable remodeling project back in June, assuming I'd get it done before the summer was over, and then BAM! - I look up and it's already August and the summer is fleeing across the sky.  Gaming has been taking a back seat to ripping up carpeting and tackless strips.  At this point I only have a few more weeks to go on the project - some ceramic tiling to do, tearing out the last of the carpet, and then laying new floors throughout the house - I'm hoping to be done before the end of September and be back to normal.  Painting and crown molding was all done earlier in the summer.

For those reasons, my online presence pretty much flat-lined since August and RPG stuff has been quiet.  Still alive though!  Here's what I saw and did at Gencon this year -  a belated Gencon report.

Zombies
My big focus was finding a good zombie board game.  I spent quite a bit of time in the dealer hall this year doing game demonstrations at various publisher booths - it's a great way to get a 20-30 minute exposure to a game ahead of buying one.  In the zombie genre, I tried Zombies!, Zombicide, and Last Night on Earth.  I thought Last Night on Earth was the most fun and best value, and ended up picking up a copy.  We've had fun with it so far.

Other Horror Board Games
I tried a bunch of other board games as well, and a couple of horror games stood out.  I'd been hearing good things about Touch of Evil, another game from Flying Frog like Last Night on Earth, and it was pretty fun.  It's one to pick up before Halloween, the best holiday, and one that's going to be here before you know it.  In Touch of Evil, you play investigators in a Sleepy Hollow style setting, gathering quest items to confront classic supernatural monsters like the werewolf or the Headless Horseman.  (It feels a bit like Elder Sign, a game from Fantasy Flight, with a different theme).    I'd also heard good things about Level 7, so we tried Level 7 Omega Protocol, which was also a lot of fun.  Players take on the role of elite soldiers in a Halo-style world infiltrating a lab full of alien-like monsters.  It's a highly tactical team-oriented combat game with cool mechanics - it was a bit pricey for the Gencon budget this time out.

RPG's
I brought the 5E starter along with our gear, in case our group had some downtime and wanted to try 5E.  All of the official 5E events were sold out.  Many of the guys in our local game group have been going out to Gencon with their sons, so we usually have 7-8 people in our party - more than enough to run our own games at the Con without recruiting.  But things were busy enough that we never did break out the 5E starter.

My oldest kiddo has been on  a gigantic anime and manga kick lately - his cosplay character above is 'Gaara' from a manga called Naruto.  One of my Gencon priorities was to try some super hero games and find an appealing set of super hero rules to run an anime-inspired supers game this year.  I am now the proud owner of Icons, a lightweight super hero game by Steve Kenson (of Mutants and Masterminds fame).  Icons reminds me a lot of the classic Marvel Super Heroes (MSH) from the 1980's and looks fine for a rules-lite anime-inspired superhero game.  The Green Ronin folks were super friendly and didn't mind spending time talking about the mechanics and doing some demo games. 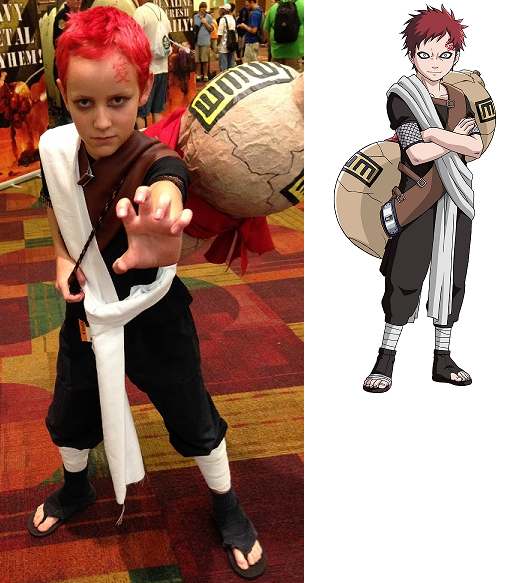 Last year, the oldest kiddo ended up packing his Legend of Zelda Link costume and wearing it at the Con.  I didn't think much of it - he saw a lot of cosplay the year before, so I guess he thought it looked like fun and wanted to join in.  This year, he went after the cosplay aspect with commitment.  We teamed up to make a fantastic "Gaara" costume, he dyed his hair, and made me apply some light make up each day.  It was like touring Gencon with a minor celebrity - he got like 40-50 picture requests a day just walking around the dealer hall and whatnot and it took longer to get anywhere due to picture requests.  Apparently a lot of people know that Naruto show, a lot of folks knew the character.  He might be on to something sneaky smart though - I saw plenty of young ladies complimenting his costume and getting chatty.

Purchases and Related Stuff
From an RPG perspective, my main get this year was the hardcover edition of Icons published by Green Ronin.  Pelgrane Press (Trail of Cthulhu) didn't release Mythos Expeditions in time for Gencon, so I'm holding out for that one - I think it just went on pre-order.  The D&D 5e PHB was around, but I figure I'll wait a little before taking the plunge.

In the board game space, I picked up Last Night On Earth and a card game called Once Upon A Time - something for the younger kiddos and my daughter to do.  I also got in plenty of Magic the Gathering, and won a win-a-box tournament - that's two years in a row winning a box at Gencon, w00t.

This was my fourth Gencon.  We're getting pretty good at getting around the con and have picked up some basic tips and tricks.  I've got to do a Gencon tips post before next year, and find out how readers who attend get the most out of the con as well.