A reader the other day asked for an example of how I'm using treasure maps to give the players clues around the dungeon.  The maps are simple, and have been found in piles of discarded gear or other treasure hoards.

Here's an example of the treasure map (the original is in the player's notes!)  It was found stuck in a reed basket in a room that looked like other adventurers used as a camp at one point - it was snagged on the weave.  The players were carrying it around for months: 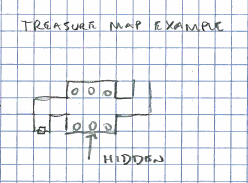 Here's the area of quadrant 1-4 referred to by the treasure map.  These treasure maps aren't high impact techniques, but the players got super excited when they realized they knew the map reference and found a hidden cache.  I think the evolution of the technique will see maps that cross entire dungeon levels, and putting backstory behind the map makers.

Plus you get to see part of quadrant 1-4 from the game reports.  The complex on the right side of the map is the palace of Atalante and the chambers of her pig-men; Connell died in room 11 when he was eaten by an Ochre Jelly; the Brew Crew were camped in room 9 when the players jumped them.  Room 15 is where they found the pit with the satyr-head potion-fountain sticking out of the wall.  The large 20' wide north-south corridor is the road of the dead, the frieze-lined passage that spirals into the Underworld.  Near the bottom of the map, it turns west and slopes downward, meeting up with level 2 of Taenarum. 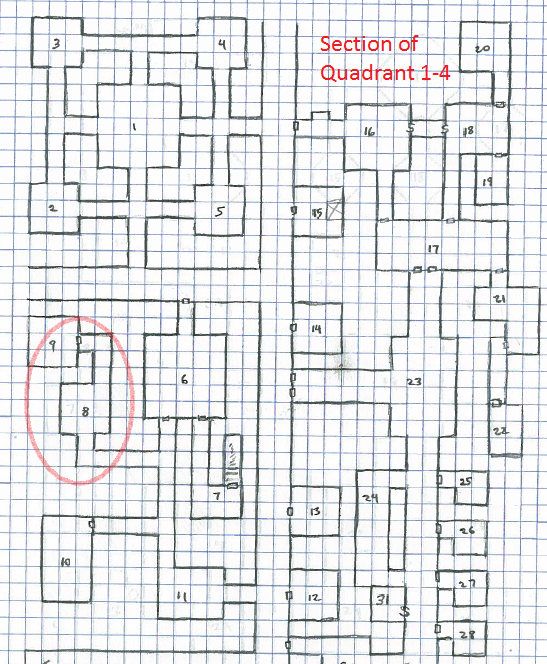