A Review of Dwimmermount 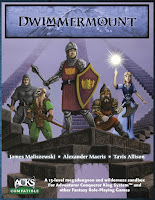 After writing a few blog posts about Dwimmermount, and running over 10 sessions of the adventure for various local players, it's time to pull it all together into a review.  The short version:  Dwimmermount is very, very good.

The hardcover of Dwimmermount is a hefty tome, weighing in at 428 pages.  It represents an entire campaign and setting in a single volume; the contents include a sprawling 13 level dungeon, surrounding lands as a hex crawl, a nearby settlement and home base, and tons of supporting materials - new monsters, magic items, other planets, detailed histories, and plenty of supplementary rules.  Dwimmermount comes either in a Labyrinth Lord compatible or Adventure, Conqueror, King (ACKS) compatible version; for reference, I've been using the ACKS version at the table.

As an adventure,Dwimmermount does some things really well.  The setting of Dwimmermount draws direct inspiration from early 20th century pulp fantasy authors like Abraham Merritt and Edgar Rice Burroughs, and it hearkens back to the free-wheeling fantasy settings of the 1970's.  The campaign is a fantastic vehicle for experiencing pulp and science fantasy adventure, and seeing the many inspirations of 1970's Dungeons & Dragons realized in a modern setting.

Not only is Dwimmermount practically textbook-sized, it can function as a textbook example on how to conceive, create, and run an old school style mega dungeon campaign.  There have been larger dungeons in terms of maps and rooms, but none have brought Dwimmermount's literary sensibilities, depth, and execution.

However, there are some issues to consider before running a game there.  First, the campaign is heavily tied into the world of Telluria, the setting of Dwimmermount. Telluria has a unique view on elves, dwarves, the planets, and the gods.  The history of the world is specific, and this specificity is striped through every aspect of the dungeon.  This tight integration between the dungeon and setting is fantastic if you want to run a full Dwimmermount campaign on Telluria, but would generate a lot of work for a referee trying to insert the dungeon into a preexisting setting.

The inspiration, vision, and draft of the campaign came out of the notes and home campaign of James Maliszewski, and the actual book was then developed, embellished, and produced by the staff at Autarch.  Dwimmermount demonstrates the challenges inherent in transforming raw game notes from a lengthy campaign into a fully realized and published game book.  For various reasons, the project ran late, and utile features like an index didn't make the cut.  It can be hard to find obscure references in a 400 page book while using it at the table.  I've found myself employing sticky notes and tabs to keep track of frequently referenced pages.  One item that's improved the table experience is the Dwimmermount "Dungeon Tracker", an add-on product that makes Dwimmermount easier to run at the table by providing handy versions of the maps and level keys.

My overall stance on Dwimmermount is that it is very impressive.  I love the literary allusions and pulp fantasy vibe, and the campaign has fired the imaginations of the kids and dads in my local play group.  I've had more fun running this campaign than any game I ran in the past year, and that's perhaps the best praise I can give any game book.  I highly recommend it.

If you want to know more, here are other recent blog posts (at the Lich House) involving the dungeon: