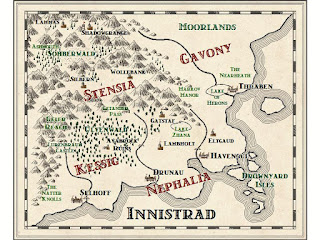 Death comes on blood-stained wings… that's a theme from last summer's Magic card game setting, Shadows Over Innistrad, as the angelic protectors of the plane succumb to madness, stoking the fires of inquisition and oppression.  I knew when Wizards created a guide for placing your Curse of Strahd campaign in Innistrad, this is something I would make happen in 2017.  Curse of Strahd is far and away the best thing for 5E, a sprawling horror-themed sandbox - highly recommend checking it out, if you haven't.

Here’s why ditching Barovia is a good idea.  First, it lets me place the campaign in a setting built around Gothic horror tropes without needing to shoehorn Forgotten Realmsians (ie, Ren-Fest escapees) through The Mists.  A regular Strahd campaign would have the players making setting-appropriate characters for Ren-Fair-Land, backgrounds and ties to various Realmsian organizations like the Emerald Tree Huggers and Gauntlet Knights and Gangster Zhents, just to shunt them off to Dracula-land where all that background becomes immediately irrelevant.  It sounds like I'm hating on the Realms; they're actually just fine for a High Fantasy game, and the 5E version does its job as a default setting.  I don't need 'em for my vampire-bashing game.

Wizards provided a handy guide for putting your 5E game in Innistrad:  Planeshift Innistrad.  There are no demi-humans; it's a human-centric setting with characters from the different provinces getting background abilities in lieu of demi-human abilities.  There are probably 1,000 cool pieces of artwork for Innistrad from years of Magic sets; a fair number have been collected into The Art of Innistrad, which also provides a guide to the plane (and takes the place of a gazetteer or campaign guide).  I've really enjoyed the art book.

On the plane of Innistrad, horrors stalk the shadows and scratch at doors in the night. Humanity is beset on all sides: vampires thirst for human blood, werewolves live for the thrill of the hunt, the restless spirits of the dead haunt the living, and no corpse is safe from reanimation at the hands of cruel necromancers or cunning scientists 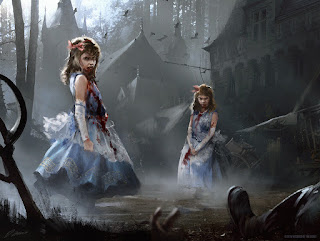 Unfortunately, Wizards of the Coast doesn't make maps for their Magic planes.  I went ahead and created my own version of Innistrad, posted above.

We kicked off the campaign last week, so I'll portray the setting as the campaign moves along.  The valley of Barovia becomes the Outland Vales of Stensia, in the far upper left of the map, with Barovia and Vallaki (two villages in Curse of Strahd) becoming Shadowgrange and Lammas, beneath the shadow of Castle Maurer (instead of Castle Ravenloft).

Email ThisBlogThis!Share to TwitterShare to FacebookShare to Pinterest
Labels: Curse of Strahd, Innistrad