A look at the D&D Essentials Kit 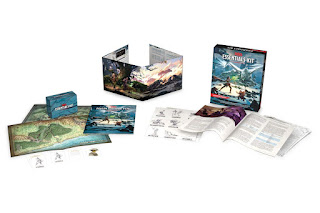 The D&D Essentials Kit is a boxed set published earlier this summer - I picked one up at the local Target.  I didn't need the rules, although the set does come with a sturdy rulebook, a flimsy Dungeon Master's screen, dice, and accouterments.  I picked up it because I was intrigued by the rules for "sidekicks", and I heard good things about the adventure module.

Sidekicks
Sidekicks are non-player characters (NPCs) that accompany player characters - the typical retainers and henchmen of old school games.  They use 5th edition "monster" stat blocks in lieu of a full character sheet, with simplified abilities, making them easy to run at the table as a complement to a player's regular character.  Ostensibly they're in the game to support solo adventuring (one DM and one player, with a few sidekicks) but we immediately started using them for old school style henchmen.  Emporo the Mighty and Josh, both fighters, are accompanying players in my Chult campaign as sidekicks.  There are three flavors - a spellcaster sidekick (clerical or arcane), a warrior sidekick, and an expert (rogue) sidekick.  There are tables for leveling sidekicks so they maintain parity with their patrons.  Sidekicks only take up two pages in the rulebook but were completely worth it.

The Dragon of Icespire Peak
The adventure that comes in the set is "The Dragon of Icespire Peak".  It's 64 pages - 50 pages or so of adventure, the rest is a bestiary.  It describes a sandbox region around the village of Phandalin in the Forgotten Realms, consisting of 14 adventure locales - dungeons, ruins, and other adventure sites, providing enough action for a party to go from level 1 through 6.  It has everything you need to launch a fun campaign - a home base, wilderness locales, dungeons, and even a bit of overarching plot (a dragon recently came to the area, setting things in motion).

A few additional things I really enjoyed about the adventure; first, since there is an actual Dragon of Icespire Peak, it flies around marauding in the background, providing nice verisimilitude before the characters gain enough experience to go confront it.  It can show up early in the campaign as a wandering monster, too, driving home the point that the world is dangerous.

There is progressive quest guidance that provides the players options on where to seek adventure, while ramping up the danger as they range farther from home base or begin to target the dragon; it's a style that appeals to old school gamers.  Phandalin is the same village described in "Lost Mine of Phandelver", the introductory adventure in the first starter set, allowing a DM to combine both adventures into a broader sandbox campaign.  I'm looking forward to starting a new campaign (after Chult) and merging Icespire Peak/Phandelver into a sprawling sandbox game (although I'd 99% ditch the Forgotten Realms and transpose the village and surrounding locales to a homebrew setting or Greyhawk).

Our Amazonian capitalist overlord sells the Essentials Kit for about $15-16, $24 at retail.  I wouldn't normally recommend a starter set (unless you're a boxed set maven) but I've been a fan of this material; I'm making heavy use of the sidekick rules, and Icespire Peak is a fine sandbox adventure to get a new game started the way the founders intended.  (Good job, Wizards).