Note:  the map below has spoilers

My home campaign is 15 sessions into the player's assault on Chult (the Tomb of Annihilation campaign).  I'm estimating we're a third of the way through the campaign, about to finish the first of three campaign arcs.  The first arc is exploring the jungles of Chult, and trying to identify the locale of the Forbidden City.  The second arc is exploration of the Forbidden City itself and learning how to open the lost tomb.  The final arc is exploration of the tomb itself.

I'm not going to do detailed campaign recaps, as we're already 15 sessions in.  I'll do a survey of the player's progress with exposition on tips and referee choices that have worked out well for us.

The most important suggestion I have for starting a new Chult game is to adjust the urgency of the "Death Curse".  By the book, the campaign starts in the Chultan city of Port Nyanzaru under pressure to find a corrupt relic lost in the jungles.  The relic is affecting the whole world; Raise Dead and similar clerical magic has stopped working.  People brought back via Raise Dead or Resurrection are dying.  Both effects together are being labeled "The Death Curse".  The character's patron, a retired adventurer and recipient of a Raise Dead, is dying, and hires the characters to find the source of the Death Curse (quickly).  They are one of several similarly hired adventuring parties.

The problem is that Chult is a sprawling hex crawl with many interesting side quests and adventure opportunities.  Perkins and the WOTC team created a great hex crawl.  But if the players are under too much immediate pressure due to the Death Curse countdown, they'll focus solely on the Forbidden City, missing out on a lot of the fun discovering lost ruins in the jungle.  I bifurcated the effects of the Death Curse; the corrupt relic starts the game blocking souls from Raise Dead and Resurrection.  It's important to find the source of the curse, but the player's patron isn't dying by the minute.  I marked a time on the calendar (60 days) where the corrupt relic has absorbed enough souls from the recently dead that it's ability evolves, and begins to leech once-dead souls brought back via Raise Read or Resurrection.  It gives the players a more relaxed entry point into exploration of Chult, while setting a countdown later when the relic begins unraveling recipients of Raise Dead and providing a time clock when it's appropriate. 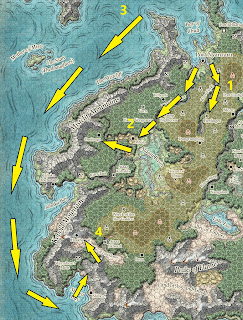 Expedition 1 (Right of Map)
The first arc starts in Port Nyanzaru, a frontier city squatting on the edge of the foreboding jungle, nestled between sluggish jungle rivers.  The players hire a guide, buy equipment, and set off on their first forays into the jungles of Chult.

My advice:  first, use the encumbrance rules (a "variant rule" in the player's handbook) and let the players know you'll be enforcing rules around heat exhaustion, daily water intake, and the difficulties of logistics in the jungles.  There is a fair amount of bookkeeping during this phase, creating inventories of food, bug repellent, tents and camping gear, canoes, and developing hex crawl "standard operating procedures" such as how to set up camp, daily jobs, canoe assignments, night watch schedules, etc.  Once they have all of this in place, the hex crawl procedures run smoothly.

I get the sense many modern referees ignore encumbrance and requiring the players to plan.  My players learned to hate and respect the jungle - the storms, the oppressive heat, the difficulty of bushwhacking overland and having to leave behind things like armor because carrying food and water was more important.  Plus the presence of dinosaurs and bands of undead, the remnants of an ancient army.  "I hate the jungle" became a running theme with the party's paladin, forced to leave behind heavy armor in order to hack through vine-choked jungle on 10 mile marches.  5E's encounters typically challenges the characters, but table top planning challenges the players.  Now that the characters are reaching mid-levels, they appreciate the way they can avoid the worst of the jungle because their wealth or class abilities afford them better options.

Their first expeditions (sessions 1-4) took them to a place on the map called Firefinger and then back to the city, moving from levels 1-3.

Expedition 2 (Center)
After their first major expedition, they spent more time in the city looking for rumors and learned about a storied oracle at Orolunga that might provide a clue to the resting place of the corrupt relic.  On this expedition, they went with more canoes and hired local porters, so they'd have hirelings to carry extra food and water (and potentially lug armor and other heavy gear).

I worked in themes from Heart of Darkness and Apocalypse Now on this river trip, with distance equating to regression into horror for those that didn't respect the jungle, culminating in their visit to Camp Vengeance, where the paladins and crusaders of the Order of the Gauntlet were on the verge of madness (and the commander, Niles Breakbone, was my own Colonel Kurtz).  There's also a fine DM's Guild adventure called Hunter, an homage to the Schwarzenegger movie Predator, that I worked in as a side-trek on this expedition.  I'll probably write a review, we enjoyed Hunter quite a bit.

This expedition also took the players on to M'Bala, and then out to Orolunga, where they did get insights on the corrupt relic and a locale for the Forbidden City (Omu).

I'm not a fan of the over-powered NPC characters that traipse around the Forgotten Realms, and Chult has it's own - the immortal Artus Cimber and his holy sword wielding sidekick, Dragonbait.  Artus, who went by the name "Sam", was encountered in Orolunga as a surly adventurer seeking his own answers from the oracle.  He and the players learned they may have a common goal, the defeat of a legendary jungle warlord Ras Nsi, but the two sides parted amidst mutual insults.  Later, the players ran into a hunting party of Zhentarim assassins on the trail of a wanted fugitive, Artus Cimber, and the players connected the dots between "Sam" and Artus.  Artus is now "in the game" in case I need a high level helper NPC at some point during the end game, but there's a bit of a rivalry so I don't feel obligated for them to team up because they're both "good guys".  He can act as a provocateur or rival.

The other recommendation from this arc was to threaten the hired help.  5E characters are notoriously tough to put down; my game still doesn't have a fatality, although we've come close several times.  NPC's don't have plot immunity and the guides and porters are critically important if you're running the hex crawl with encumbrance and logistics.  It's been great fun having monsters choose the easier targets and stressing the players about such important resources.

This expedition covered sessions 5 - 12, and saw most of the party hit levels 4 and 5 before returning to the city.

Expedition 3 (Ocean-based)
By this point, the players knew a lot about Chult and had many targets for their next journey.  However, the jungle ruins don't provide a lot of cash and their pouches were getting light.  They learned about a lucrative pirate hunting opportunity in the city dock ward, and hired a ship to go pirate hunting.  Drink up me hearties yo ho.  This allowed me to introduce the dragon turtle in the Bay of Chult, and we had a great time running an intricate ship-to-ship combat when they intercepted a pirate ship by trailing a loaded merchant vessel - the pirate ship was called "The Stirge" and they ultimately captured it and sailed it back to port to collect a heavy reward.  I also ran a pirate-themed lighthouse encounter from one of the DM's guild supplements, Encounters in Port Nyanzaru.  When all was done, the characters were flush with cash, owned their own sloop, hired a captain and quartermaster, and planned a long voyage to Shilku Bay to begin their trek to Omu, the Forbidden City.

My advice if you try something similar is to leverage the ocean voyage rules from Ghosts of Saltmarsh for 5E.  Ghosts of Saltmarsh is a nautical campaign, and the appendices cover detailed vehicle rules for ships, downtime on long voyages, sea hazards, ocean borne encounters, the works.  It's a great resource to put some nautical flair into your Chult game.  One of the Unearthed Arcana articles had additional ships (I think I got "sloop" from the UA article).  I have irrational love for pirate adventures.  The Ghosts of Saltmarsh campaign is in my future, along with grog, sea shanties, and a bunch of pirate movies.  (In fact, I'm currently streaming Black Sails with my wife).

Expedition 4 (South)
When the characters set out for the south of Chult, they were loaded up for a long journey.  They used the wealth from pirate hunting to buy some magic items, many potions, and sufficient food and gear to stay in Omu several weeks.  Their patron had been tracking them via Dreams and Sendings magic; now they learned from her the Death Curse has entered a new phase, and recipients of Raise Dead that predated the Death Curse are beginning to unravel.  She's dying.  Suddenly there's a time clock!

Their new guide for the expedition is an albino jungle dwarf named "Musharib"; he waived his fee if the characters would help him explore Hrakhamar first, so they've been clearing that mini-dungeon - a dwarven forge overrun by Fire Newts.  They learned of the dragon in Wyrmheart Mine and plan to assault it next, then head for Omu and the next leg of the campaign.

I'll post another set of observations sometime after they've explored Omu and are entering the final arc, the Tomb of the Nine Gods.  Feel free to generate a discussion in the comments about your own Chult game and how things went by you, I'd love to hear it.
Posted by John Arendt at 1:47 PM