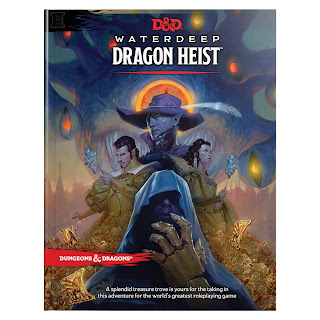 A friend of mine is the admin for a local Adventurer's League store, and I've been helping out as a guest DM since this summer.  When the new "season" started in September, I began running a pair of the 5E hardcover books on alternating weeks - Waterdeep: Dragon Heist one week, Baldur's Gate: Descent into Avernus the following week.  Dragon Heist is a compact story and we finished it this week after 6 four hour sessions.  Here's a recap of our experience as well as a capsule review.

The Dragon Heist Experience
With Adventurer's League, a referee needs to anticipate transience with the weekly players.  An ongoing campaign needs to gracefully handle characters coming and going.  For Dragon Heist, the players created an adventuring company called The Misfits; by the second chapter, they owned a tavern in Waterdeep, and any transient characters were heretofore unseen members of The Misfits who helped run the business when not adventuring.  It worked well.

The players were all experienced and competent, made good choices, and blazed through the campaign smartly.  We only lost a single player when an encounter with an assassin, Urstul Floxin, went poorly.  (Dick the Gnome Wizard was a replacement character).  However, the campaign didn't lack drama.  There's a tense battle with an intellect devourer at 1st level, and plenty of powerful, high level NPC's throughout the chapters that can lay a smack down (including death by immolation if they run afoul of a 17th level gold dragon).  One of our capstone battles involved the players fighting Meloon Wardragon, a high level fighter possessed by an intellect devourer.  There's a mind flayer and intellect devourer sub-theme in Dragon Heist, since one of the crime syndicates is run by a Beholder and employs a mind flayer and intellect devourers to infiltrate organizations in the city.

The summary of the campaign goes like this:  a previous lord of the city embezzled a half million gold pieces ("gold dragons"), and hid the money in a secret vault in the city.  A magic key to the vault has resurfaced, and the crime syndicates are fighting each other to be the first to secure the key and locate the vault.  The players become embroiled in the gang war, learn about the key, embark on a chase all over the city to claim it, and eventually become the group that discovers the lost vault.  The treasure is ultimately guarded by an adult gold dragon.  There's no chance of winning a combat against the dragon, so the players either need to think quickly and win a high stakes social encounter, or run for their lives.  The Misfits had negotiated events to that point such that they were accompanied by a doppleganger ally; they convinced said doppleganger to assume the form of the original lord's adult son and heir, Renaer Neverember, and used an extremely well-forged document to pass title of the treasure as an inheritance to their fake heir.  It was a classic heist movie moment.  Sidebar:  Heist scenes like "Ocean's 11" can be hard to pull off at the table in real time, so I let the players do flashbacks while in the vault if they think of something they should have planned for - such as the the forged documents, wearing the right uniforms, that kind of stuff.  Here's a good post from DM David that describes the technique of using flashbacks to support a heist session - good stuff!

However, our particular campaign ended with the villains getting the last laugh, and ensuring there will be a future reckoning.  Dragon Heist has four sets of antagonists, determined by the time of year you set the campaign.  The Misfits chose "summer".  Their secret adversaries were powerful devil cultists called the Cassalanters.  When Victoro Cassalanter learned his agents lost the vault key to the players, he ingratiated himself to them, portraying himself as a victim of a diabolical plot; the souls of his innocent children were forfeit to Asmodeus unless he and his wife could produce a million gold pieces by mid-summer.  He needed the gold to ransom his poor children.  The heroic instincts of The Misfits predisposed them to ally with the Cassalenters to "save the children", and they won through to the gold on Victoro's behalf.  The players were later invited to be guests of honor at the Cassalanter's mid-summer gala, rubbing shoulders with well-to-do nobles from Waterdeep's upper crust, while the Cassalanters threw a sumptuous spread for many poorer residents of the city out in the courtyard of the villa.

It was a giant trap.  The player characters, along with the stunned noble guests in the main house, watched in horror as the courtyard full of peasants died at midnight to a horrific time-delayed poison, "midnight tears", an exotic toxin.  The players learned, too late, there were two parts to the Cassalanter's bargain with Asmodeus; the Cassalanters needed the gold, but they also needed to sacrifice a hundred souls in order to void their original contract.  Victoro and his wife black-mailed the nobles in attendance as accomplices to the horrific crime, ensuring they'll be able to cover up their misdeeds and continue their social advancement through leverage on several well to-do families.  The Cassalanters also had enough "muscle" present to dissuade the player characters from starting a brawl on the spot.  Victoro reminded the Misfits that they did indeed "save the children", even if it was based on half-truths and deception.  Victoro had bribed the characters with magic items and promises of future payments for their help, and he upheld his side of the deal.  In future games, Victoro will attempt to compel the Misfits to act as agents of the Cassalanters, the way a crime lord will exact service when he has some dirt on a mark.  It's good to have villains the players really despise.

Capsule Review of Waterdeep: Dragon Heist
I provided a summary of the campaign up above.  Besides the five chapters covering the main story, Dragon Heist includes a gazetteer of Waterdeep, detailed lairs for the 4 antagonist organizations, the usual appendices of magic items and new monsters, and a pull-out poster map of the city.

Like any plotted adventure, there are connecting points between chapters that can be missed by the players, and the game master needs to be ready to nudge the action if advancing the story line is important.  For instance, our sorcerer had joined a magic guild called the "Watchful Order"; a fellow member of the Order suggested they pursue a Speak with the Dead spell as an option to learn information about a crime, thus revealing a clue to the next adventure site.  Ideally you'd like the players to consider these options themselves, but a plotted story may require the referee to prompt them with a friendly NPC here and there to keep the narrative on track.  Plotted stories are not my favorite style of play, but this one offers several patterns that made it quite memorable.

At the end of the first chapter, the players can take ownership of an abandoned tavern, Trollskull Manor.  Chapter two is all about deciding what to do with the place and exploring the neighborhood.  This was one of my favorite elements in Dragon Heist; I've found through the years many of my player groups have loved establishing a home base, an identity, and a brand for themselves.  The Misfits turned Trollskull Manor into a gambling hall and gin joint, and promoting their business (while adventuring) became a running theme throughout the campaign.  Through research and good play, they befriended the ghost of the deceased owner and own Waterdeep's first "haunted tavern" where a poltergeist helps tend bar.

I mentioned during the recap the players joined "The Grey Hands" and "The Zhentarim".  The factions provide the party with side quests and advancement opportunities that give the campaign a "world in motion" element while advancing the story themes.  The Grey Hand side quests in particular built on themselves nicely.  Dragon Heist provides some replay value because a second group could be presented with different faction choices (as well as picking a different master villain) and the pivotal chase sequence in chapter 4 changes based on the villain.  If my home group wanted to experience Dragon Heist, I wouldn't say no since the experience would vary quite a bit.

Chapter's 5 through 8 detail the lairs and organizations of the 4 principal antagonists of the campaign - the Xanathar Guild, the Cassalanters, a drow mercenary named Jarlaxle, and a Manshoon clone leading a Zhentarim branch.  It's unlikely these secret lairs will matter much during a run-through of the main story line, but I'm sure they'll see use in a long term campaign in Waterdeep - especially if the referee continues on to Dungeon of the Mad Mage, a megadungeon based in Waterdeep that picks up after Dragon Heist when the characters are 5th level.

Overall I liked Dragon Heist.  The home base, the faction missions, the big chase sequence, the "heist", all present interesting urban play patterns that provide a change of pace from exploration-based hex and dungeon crawls.  The plotted scenes weren't hard to keep on track; the Trollskull Manor side business and faction side quests were great fun.  Chapter 4 is a gigantic chase sequence composed of a handful of connected vignettes.  The chapter is okay, and moves along nicely.  There are several breaking and entering "heist" style capers that can devolve into fiascoes - infiltrating Gralhund Villa and breaking into the main vault to confront the dragon.  However, to get full value out of the book, I'd recommend it for referees interested in running a Waterdeep campaign, to take advantage of the full content.  As for my group, we'll be starting Dungeon of the Mad Mage sometime in January and I'd expect the lairs in chapters 5 through 8 to become relevant in a long term campaign.


Artwork copyright Wizards of the Coast