Get Your Mythology on with Odyssey of the Dragonlords - A Review 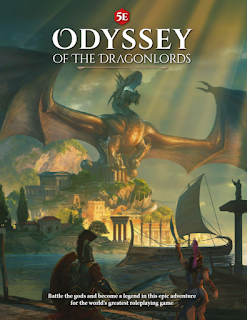 Odyssey of the Dragonlords kickstarted earlier this year, and the digital rewards were delivered in October.  With the long holiday weekend, I was able to finish my read through and reflect on the work.  It's impressive.  You'll see below I call out several things I see as problems, but the vision and scope of Odyssey of the Dragonlords is inspiring.  It's broken new ground for 5E.

Like most reviews, there are could be some spoilers ahead.

What is It
Odyssey of the Dragonlords is essentially a massive "adventure path" that takes a group of characters from 1st level up to at least 15th level, and probably closer to level 20 (or immortality, whatever comes first.)  Along the way, it details a setting heavily inspired by Greek mythology, called Thylea, with analogs to Sparta, Athens, Atlantis, the underworld, and many island stops reminiscent of the Odyssey.  For inspiration, it felt like reading a mashup of The Iliad, The Odyssey, the Metamorphoses, Percy Jackson, Clash of the Titans, Xena Warrior Princess, The 300, Dragonlance, and the Godzilla series.  (There are lots of giant monsters).

It comes with an extensive player's guide (freely available:  here) which includes Greek myth inspired races, new class archetypes, a setting guide, and a new type of background called an "epic path".  The epic paths are optional additions that give the character another connection to the setting, and establish a potential story-line and destiny for the character.  They reminded me of 4E's "epic destinies" but you establish them during character creation instead of waiting for "Tier 4".

Who Made It
The writers are credited as James Ohlen and Jesse Sky in partnership as Arcanum Worlds with several other creative contributors; the kickstarter listed them as fans of Dungeons & Dragons, long time campaigners, and possessing many video game creative credits (Dragon Age, Knights of the Old Republic, those types of games).  The setting, characters, and plot-lines all point to professional writers, backed by a serious publishing house (in this case - Modiphius Entertainment, publisher of a wide range of RPGs and board games - Vampire the Masquerade, Star Trek, Conan, Acthung! Cthulhu, and more).  The cadre of artists they assembled did a fantastic job bringing Thylea to life.

What Was Awesome
I loved the setting of Thylea. As the campaign develops, the authors incorporate the major themes and elements from mythology or the secondary material, while retaining the core of the D&D game experience.  Plus dragons.  There weren't any traditional dragons in Greek Myth (Ladon, or maybe the serpent of Pythia) so the dragons of Thylea arrived from the outer lands as invaders.  It wasn't lost on me that Odyssey of the Dragonlords has similarities to the Dragonlance series of the 80's; both lay out an epic storyline for the player characters with world-shaking implications, they involve reintroduction of lost or missing gods, and plenty of dragons to battle and ride.  There's even an Orb of Dragonkind as a potential treasure, like an Easter egg pointing towards Hickman and Weis.

Odyssey of the Dragonlords is epic in scope.  The central conflict regards a 500 year peace between the ancient Titans and the gods that is about to end, plunging the world back into a divine war.  The oracle identifies the player characters as the heroes that can forge a new peace by confronting and defeating the Titans, after a series of quests and journeys to arm themselves and build their power.  However, confronting the ancient Titans is only the first domino; there are older and more dangerous forces in the cosmos, and where this particular campaign shines is it's willingness to up the ante and push the high-powered characters into conflict with larger and stranger primordial threats.  The capstone involves 4 terrible "weapons of the gods", giant monsters from the dawn times, awakened and rampaging across the land all at the same time.  One of them is the Tarrasque.

I already called out a reference to Dragonlance; the campaign also reminded me quite a bit of Mystara, another gem from the 80's.  There used to be a boxed set called "Wrath of the Immortals" that featured a world-spanning divine war.  This campaign is just as gonzo as anything published for Mystara.  One of the potential end-games for the characters is to ascend to immortality themselves and become a new pantheon.  Great stuff, absolutely bonkers - like those 70's campaigns where the players killed Thor with Stormbringer and then used Mjolnir to smash Cthulhu (because Deities and Demigods was a monster book, right?)

Thylea is a self-contained "world" that supports a game master putting the continent and islands of Thylea into an existing game setting - there are plausible explanations regarding why outsiders can reach Thylea.  This explains why they setting has some elves, halflings, dwarves, and dragons, mixed in with the satyrs, centaurs, nymphs and sirens.

Problems
Any long time reader here knows I favor sandbox settings - hex crawls and megadungeons.  Give me the lego blocks, let me build my own thing - don't give me a 300 page story to follow.  Odyssey of the Dragonlords is a 300 page "adventure path".  The action is especially forced in the first few chapters, getting the players to board the train and leave the station.  However, once the characters are engaged with the main story-line, the world opens up significantly and the players get real choice on how to attack the remaining story-line.

Similarly, the player characters are the snowflake chosen ones, right from the start, assuming they chose an epic path.  It's in keeping with the source inspiration - if you're a demigod learning to grow into your power, this is a fact that oracles and the great powers can learn.  Kings have heard of you, the gods know about you.  You can't play as Achilles, Hercules, or one of the Argonauts without having some degree of destiny and fate surrounding your character.  But this is much different style of play than the zero-to-hero approach in our OSR games.  That being said, the authors implemented the "epic paths" well here - they don't constrain agency, they just give the players some narrative juice and built in goals they can pursue (or not).

Overall Recommendation
I highly recommend this one.  It's massive, thorough, lovingly developed, interesting, and breaks cool new ground for 5E.  I only bought into the digital rewards, and I'm regretting I didn't order the hardcover - this one would be fun to have.  The care in the world and setting building, and love for elements of mythology comes through in droves.  There's a dearth of 5E adventures that push into levels 15-20; Odyssey sits in rarefied territory, with meaningful challenges for 18th level characters.  I like the thematic similarities to Dragonlance and the gonzo elements of Mystara's "Immortals" campaigns.  The material is so compelling I'll smooth out any early issues with the plotted sections.  Once this campaign gets moving, it's going to be a tour-de-force.  When my players finish Tomb of Annihilation, I'm going to ask them if they're up for trying this one.

Unfortunately, hardcover books aren't available yet - the kickstarter updates claim they'll ship in January.  Besides the free player's guide on DriveThruRPG, the only way to get a copy of this campaign is doing a late pledge via the kickstarter rewards page - here.

Email ThisBlogThis!Share to TwitterShare to FacebookShare to Pinterest
Labels: Odyssey of the Dragonlords, Reviews