I like point-based experience systems.  Viewing it in terms of indicators, they're both predictive and performance measurements, leading and lagging.  They work best in a game setting where the players have enough information to make meaningful choices about the level or risk they want to undertake.  "We're only level 2, but last week we found the stairs down to dungeon level 3.  Should we try it out?  We may score a lot of experience".  There does need to be a story side to the game, too, to supplement the gaming side of play.  There should be quests and story-based reasons to explore the aforementioned level 2 or level 3 that provide additional enjoyment.  This combination of enabling player choice and story rationale is the alchemy that made old-school gaming fun.

Last post I railed against milestones and 5E's default approach to point-based experience, which is based on combat victories.  Treasure is a more elegant measure because it opens up a greater range of player options and tactics than kick in the door, fight the monster, loot the bodies.  (Although I do love me some Munchkin).  Several commenters asked why not try treasure as the point-system for 5E, and some also pointed to online resources where folks have tried it out.  As a thought experiment I decided to take a look at treasure for XP for the Fifth and see what implications it could have for a campaign. Spoiler:  I think it can be fairly workable!  Thank you for the ideas internet amigos.

Some Wealth Comparisons
One of the issues with treasure in older editions is the exorbitant wealth that player characters bring back to civilization, straining credulity.  I did a comparison of expected money for an old school game versus a 5E game sometime ago (old school to 5E treasure comparison), the old school party will accumulate some 3 million gold pieces in value by 10th level (600,000 gp per character).  By comparison, a 5E party using "horde-based treasures" from the DMG will only have only gained about 20,000 gp per person.  That's no small difference, and underlines how "cash poor" 5E characters are compared to the expectations of other editions (or said another way, how bonkers was the gold expectations of 1E and BX).

How about if we were to substitute XP for Gold for your 5E game?  Cumulative experience requirements for a party of 5 to reach 10th level is in the neighborhood of 425k experience (425,000), so that corresponds more or less to 425,000 gold.  On the one hand, that's a lot less "money" than the 3 million required for your BX characters to reach level 10.  It floods your 5E game with a bit more money than the modest 20,000 gp a single 10th level character is expected to accumulate.  Poor Adventurer's League characters get hardly any money at all - the 10th level "Season 9" character will officially only have 1,760gp.

I put these in a simple chart for comparisons and highlighted level 10: 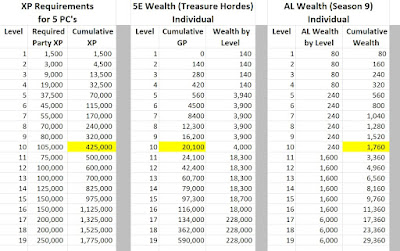 The big take away for me:  Converting 5E to use a GP-based experience system represents an increase in character wealth, but it's should be more manageable in-game than the equivalent wealth (millions of gold pieces) an old school party will recover.  So let's assume your 10th level party now has 400-500,000 gold pieces.  How can they reasonably spend their money?

Spending the Money
Old editions provided several "money sinks" for wealth that ensured characters donned their armor, hoisted their backpack, and trudged once more into the dungeon or wilderness.  The cash outlets were stronghold construction, magic item purchase, training costs, and taxation.  Let's see how these fare under the Fifth.

Strongholds are covered in the DMG.  A small keep or castle costs 50,000gp, a large one can cost up to 500k.  Monthly upkeep ranges from 3k per month up to 12k per month !!!  Plus there's the potential need for standing armies.  Considering a single level 10 PC will have 80-100,000gp, they'll have enough money to establish and staff their own stronghold.  As long as the referee is willing to have a consequential domain-level side game, strongholds will take a big chunk of player cash.   (Ideally you'd also have some kind of land income to offset the maintenance and upkeep costs, and potentially fund standing armies.  Dust off the ACKS or BECMI Companion Rules).

Matt Colville's book (Strongholds and Followers) is a little friendlier for mid-level characters to get started with strongholds, with costs down in the 6-10,000gp range for starter models.  Players can embellish their strongholds over time up to that 50,000gp range.  After recently running Dragonheist and seeing how much lower level characters enjoyed having their own place (Trollskull Manor), I submit 5E referees should encourage more of this style of play as part of "downtime".

Magic Item Economy:  Xanathar's Guide to Everything included suggested costs to buy and sell magic items for 5E - by popular demand, I presume.  Here are a few sample costs of items, ranging from uncommon up to legendary (costs shown are the max for that category):


5E is notoriously strict on magic item disbursement compared to older editions, and I've seen many online discussions scoff at the notion of making magic items for sale.  I'm not sure buying magic items is the "campaign wrecker" of the accusations.  I would not put a 24-hour Ye Olde Magic Shoppe on the village corner.  But couldn't there be an exclusive auction in distant Byzantium or far Carthago where rare and sundries are sold for exorbitant prices, reached after a long journey?  How about the local lord who is losing the manor due to misfortune and needs to forfeit an heirloom that was enchanted in a gentler age?  (Even Sam stole his family's Valyrian sword to fund his stay with the Maesters in Old Town, GOT fans).  Maybe the Collegium of Wizards takes commissions and puts students to work on long term enchantment projects to offset tuition (plus they'd require the players to collect any dangerous ingredients their item required).  The point is, I'm sure there are discrete and narrative-friendly ways to allow occasional buying and selling of rare objects without devolving into 4E's residuum and shopping trips to the Magic-Mart.

I don't think I'd implement training as a requirement for leveling up, 1E style.  Players hated it as much as being taxed to oblivion.  (With apologies to Gary). Since we're only dealing with a hundred thousand extra gold pieces, and not several million gold, I don't think we need to pursue such extreme measures.  But you can have the characters tithe 10% to the local church, as it's good for them (even in D&D).

Let's not forget living expenses from the PHB.  Before the players have those strongholds, living comfortably costs about 60gp per month for food and board.  It all adds up.

A Proposal
Older editions assumed 75% or 80% of a character's advancement came from treasure XP, the rest was from monsters.  These are easy to calculate numbers if the referee still wants to award some experience for defeating monsters; you'd just divide the monster XP by 4 or by 5 respectively.  In this way, you can seed your campaign setting with treasures - guarded by monsters, guarded by traps, forgotten and hidden, where ever you want to put it, and separate treasure XP and monster XP close to the earlier games.

A procedure for stocking a level would go something like this - using the experience table above, you'll see that a party of 5 needs 3,000 XP to go from level 2 to level 3 (600xp per character times 5 = 3,000xp).  You'd build your dungeon with enough encounter experience to provide the 3,000 XP worth of combat challenges (monsters).  Ideally, you'd include more monsters than required, and assume some wandering monsters, too.  You can disregard "game balance" concerns for encounter building, because the XP system no longer mandates that the players engage and win every combat to advance - fleeing and avoiding combat are now sound options that don't penalize advancement.  After stocking monsters, you'd then populate the dungeon level with enough treasure to deliver 3,000 XP or close to it.  When it comes time to award experience points, the treasure points are worth 1GP = 1XP, but the defeated monsters are 1/5 Monster XP = 1XP.

This shifts wandering monsters from a windfall of extra experience back to being a low value irritant.  In old school games they are to be avoided.  By minimizing the experience you get from combat, fighting in general returns to being a sub-optimal use of the player's time from an advancement perspective, and we get back to more of that Sword & Sorcery or picaresque vibe of the old school.

I no longer think it'll be hard to switch over to a treasure-based XP system and be worried about the implications; I just needed to run the numbers and reflect on whether there are meaningful opportunities to spend money.  It looks to me like it will work.  If I'm being dangerously naive, please let me know in the comments.