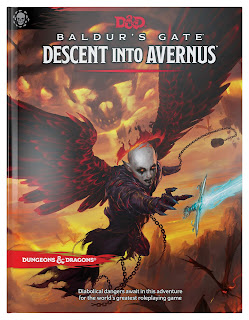 I wrote a review of Descent into Avernus last fall when it came out, and I don't believe I was kind to it.  I recently finished running the first chapter, and my opinion remains unchanged.  The first chapter (which covers character levels 1-5) has problems.

It's fair to ask, if I knew it started as a train wreck, why would I run it?  Two reasons - player empowerment, and I'm still expecting the epic second half of the campaign, rumbling around hell on Mad Max infernal machines, will pay off as gaming bliss.  By empowerment, I gave my Adventurer's League regulars a list of the 5E Campaigns I owned, and they all voted on their top adventure choice - Descent into Avernus was the winner.  My players can all go to hell.  (That joke never gets old).

So what's egregious in Descent and how do we improve it?  The background is that the nearby city of Elturel has completely disappeared, and refugees have swarmed to Baldur's Gate.  Chapter 1 starts with a railroad-like press gang forcing the characters into the watch, which launches them into a series of scenes (picture a flow chart) that guides them from site to site until they claim a key MacGuffin (an infernal puzzle box).  Along the way, they learn that the city of Elturel has been dragged to hell, and the actions of the players avert a similar disaster happening to Baldur's Gate.

Once the players have the infernal puzzle box, they learn it can be opened by a sage in distant Candlekeep.  You have to hope the players are curious about the contents of the box, or make a "pretty please" style request from an NPC authority figure; there's not much "what's in it for me" for the players to go to Candlekeep.    The box holds an infernal contract which confirms their suspicions - Elturel is sitting in hell.  The sage offers to send the player characters to hell, too, just to check it out.  There's no discussion about whether the city can be saved, undoing the curse, or finding a way back to the world.  How do we get back?  "Good luck with that, maybe you'll find a way while you're in hell".

In hindsight, the player characters need starting motivations that predispose them to care deeply about Baldur's Gate and the missing Duke, Ulder Ravenguard, who was in Elturel when it got dragged under.  Knowing what I know now, I'd start a future version of this campaign with a session zero "social contract" conversation.  First, let everyone know this is an adventure path, so you're signing up to follow clues so you can experience the author's story - don't go off script, it's not a sandbox.  Second, your characters need to have intrinsic motivations - you are either deeply, personally loyal to a beloved noble in the city (the missing Duke Ravenguard), or you are strongly motivated by "doing the right thing at great personal cost".  This is a fine adventure for heroes and goodniks.  Mercenaries, rogues, and typical power hungry self-interested D&D characters, maybe not so much (but see Snake Plissken, below).  Adventure paths can work fine as long as everyone is on the same page at the outset and you set good expectations for the table.

In addition to starting with the right type of party, I'd also provide a stronger clue to the players that the beloved Duke is alive (once they find out he's in hell with the city).  Maybe some type of divination, Commune or Contact Other Plane, or similar lore-based magic can indicate the Duke is alive, so a rescue mission is not a blind shot in the dark.  The players should also have access to some kind of way back, so they're not undertaking a suicide mission.  I'd either give them a Plane Shift scroll, or have the arch mage that took them to hell promise to return them (even if he ditches them in hell, at least they agreed to go with a faint hope of return).  Getting back is never addressed in the book.  I'm a big fan of Escape from New York, doesn't Escape from Hell sound even better?  That's another way to level up your Descent into Avernus chapter one - once you realize it's going to be a "rescue the MacGuffin leader", get your players to channel their inner Snake Plissken:

Despite the plot issues, we did have fun.  There are murders happening in Baldur's Gate to start the game; I embellished the murder sites into ritual killings (like the zodiac killings, Manson murders, and Jack the Ripper all mixed together) and gave the players the opportunity to join the watch as deputies in order to find and stop the killers.  It was a more indirect way of getting them onto the clue path.  There's an opportunity to fight some pirates early on in a tavern; not only did they win the tavern fight, they scouted the pirate ship in the harbor and took it from the other pirates, too.  As they continued to follow the chapter 1 path, they fixed up the ship, hired a crew, and turned the ship into an ongoing base; it became a great source of engagement and running jokes.  Then when it became time to leave the city and go to Candlekeep, they set sail on their ship instead of leaving the city on foot.  Wind in your sails and sea spray off the bow - even a railroad is great fun when you get to blow the whistle, make choo choo sounds, and look out the window.

We're still going (every other Tuesday), I'll be back in a few months with observations on how the chapters in hell are turning out.
Posted by John Arendt at 3:14 PM

Email ThisBlogThis!Share to TwitterShare to FacebookShare to Pinterest
Labels: Descent into Avernus, Reviews