Reflections on Westworld and Gaming

Tonight is the premiere of Westworld (Season 3).  I'll have plenty of time to keep up with it - we're shifting into "social distancing" on the east coast, schools are closed and companies are asking office workers to stay home while we weather the pandemic.  Westworld about a fantasy game world where people interact with lifelike robots, and elements that define the Westworld game experience overlap table top games.  I'll take a look at some of the overlaps down below.

The original Westworld was a movie back in the early 1970's.  It was a Michael Crichton story about a set of theme parks populated by robots that allowed park visitors to play out their fantasies in a fully realized space (and said fantasies could be violent and lustful).  The story centers around visitors to West World, the Wild West themed park, who pay exorbitant ticket prices to take on the roles of gunslingers or lawmen; there was also a Rome world and a Medieval world.  The movie invokes one of Crichton's popular themes, that whatever can go wrong with technology will go wrong, his fixation with chaos and entropy.  In the movie's context, that meant that robots programmed to follow their story-lines and not harm people violated their programming and went on a murderous rampage.  Yul Brenner was menacing as the evil gunslinger robot gone amok:

HBO took the original idea several years ago and re-imagined it with updated technology and a more sophisticated approach to the park and its operations, all with HBO's high production values, A-list actors, and thoughtful writing.  The show explored themes regarding consciousness, free will, agency, and then turned up the dial on the wish fulfillment -  showing people at their best and worst while interacting with the "hosts" that populated the park.

These Violent Delights have Violent Ends 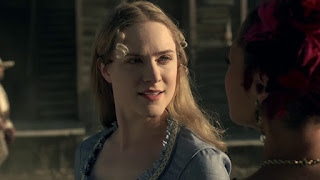 This Shakespeare quote is repeated by a few robot characters, the euphemistically named "hosts", early in the series... a prophetic warning of what's to come.  Rich people come to the park to take on Wild West roles, free to explore violent or depraved power fantasies unfettered by conscience.

I just got a copy of Goodman Games Into the Borderlands, their 5E conversion of The Keep on the Borderlands and In Search of the Unknown.  It brings back some memories.  I'm not sure I've ever played in a game using the Keep where the players didn't treat the Keep like another dungeon.  "Why did they detail all the townspeople's hidden gold and money stashes if they didn't expect us to loot them?"  Heck, I've had TPK's practically happen just past the gatehouse when a bunch of high school aged players tried to rob the warehouses and the guards descended on them.  It'd be interesting to run the Keep nowadays with my middle aged friends and see if they approached it differently (maturely).  Discovering extreme agency is one of the early joys when first picking up a roleplaying game and its usually kids that tend to run a bit wild at first.  "You mean I can just punch that guy in the bar?"

It may not be as extreme as physically traveling to a simulated fantasy world, but agency on the tabletop shares a lot of Westworld's escapism - playing an usual nonhuman race, taking on a Chaotic or Evil alignment, wielding fantastic magic abilities.  (Potentially) treating NPC's like exploitable resources. 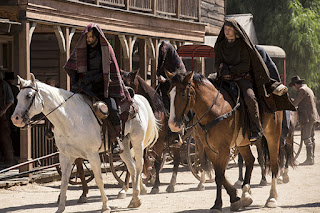 There's a bit in Westworld that amused me greatly.  There's a writer character in the story, the narrative director Sizemore, who falls in love with his plots and stories.  He's especially proud of the dialogue of Hector, the villain who violently enters town, kills the sheriff, and hauls a safe out of the Mariposa Saloon in an elaborate robbery.  Sizemore watches from the safety of the operations center as Hector and his violent gang ride up to the saloon, kill a bunch of citizens according to the script, and then Hector starts to lay down the impressive monologue Sizemore wrote for him.  But before Hector gets out more than a few words, BAM!, he gets shot by a rich guest (player character) who then breaks character and turns to his wife,"Look at that, I just shot him in the neck!  Quick, let's get a picture."  It's more extreme agency, power fantasy tourism.

I can't tell you how many times the villain during one of our sessions starts a monologue, only for a player to interrupt, "I shoot him when he starts talking..."  It seems to happen a lot with the Adventurer's League Crew and is always good for a table full of laughs.

Being a referee is not about being a writer and telling a story, the writer's story.  A referee is presenting a setting, and the story is what happens after the player's interact with the setting.  Giving them agency means sometimes the bad guy gets shot before he utters his monologue.  Sorry Sizemore, here's a tissue for your tears.  You know you've done a good job when the setting and context is interesting enough the players want to hear the end of the monologue and hold off on declaring "Roll for initiative". 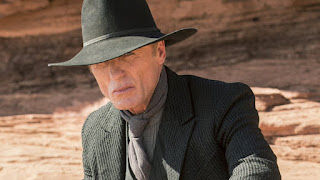 There's a "villain" in Westworld, a rich human called "The Man in Black", who's obsessed with trying to solve a deeper mystery in the game by finding a place he calls "the maze".  The Man in Black is tired of playing the stories built into the game, and sets out to create his own story.  He's bored with stories the writers put into the game world.  "The game's not worth playing if the opponent's programmed to lose."  I can't tell you how many times I've been running crappie written adventure paths and the players would rather "go over there" and follow up something more interesting than the author's badly plotted story-line.  (I'm looking at you, Descent into Avernus, the current disaster I'm running for Adventurer's League).

The flip side of extreme agency is that the player's choices need to have real consequences.  Failure needs to be an option.  The Man in Black rides roughshod over Westworld's stories and narratives, exploiting the fact that the hosts can't actually kill him, until just about the final scene.  Season 1 ends with them transcending their limitations, including gaining the ability to inflict real harm on the guests.  The park is suddenly populated by robots programmed to be hardened Wild West killers, and now they're free to actually hurt their oppressors.  There's a massacre at a glitzy party in the final episode of Season 1 where all the corporate types are in the park to celebrate the start of a gruesome new story-line.  The Man in Black is shot and injured by real weapons, and barely escapes with his life.  The game is finally real for him.  And he smiles.  Game on.

It's a reminder to us as referees - don't fudge the dice, failure is an option, player characters can die, and choices must have consequences - for good or bad.  It's the chance of failure that makes winning meaningful.  The Man in Black would be right at home in a game refereed with old school values and perspectives.

In my 5E home game, Tomb of Annihilation, the players have been exploring the actual Tomb of the Nine Gods - an homage to S1 Tomb of Horrors from AD&D.  We've had several near deaths, which is unusual for 5E.  Their victories have been real and meaningful.  They say it's the best 5E gaming they've experienced.  The defense rests - at least for me and mine.


*All the pictures are from HBO's Westworld 2016. It's been a good series!