Scattered  around the city are various monolithic carved alien heads - the Watchers of the Black City.  These stone monuments were once part of the city's ancient defenses.  There is a cluster of them near letter I on the city map; others stand guard near the most secure extant buildings and will be noted in the text.  Adventurers may also stumble upon a lone Watcher while wandering the city (Watcher will be an entry on the artifacts sub table when searching hex contents).

The men of Trade Town have encountered some Watchers near a tower with many spires - area B on the city map, and there's an associated rumor on the rumor table.

Rules for Watchers
Random Watchers should be split evenly between free standing and revolving.  There's only a 50% chance the animating force in any given Watcher is still functional.  Watchers can detect invisible and track nearby movement (range 60'); they'll attack targets not carrying a proper pass key gemstone.  Roll on the following table for security level:

Note:  a higher gemstone allows passage past all lower security levels - for example, a character with a blue stone can get past green-level doors or Watchers.

Watchers are a limited form of stone golem; they can only be damaged by magic weapons and are immune to most spells (Rock to Mud acts as a Slow spell and Stone to Flesh makes it vulnerable to all attacks for 1 round).

Attacks vary, but here are some basic ideas: 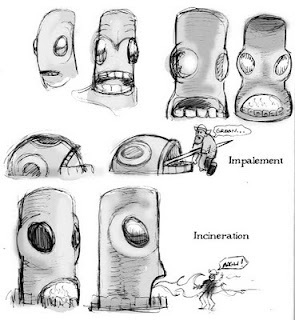 Free Standing Watchers
Eye Blasts
A pair of eye blasts fire from the Watcher's glassy eyes.  They target a single opponent.   Roll two attacks; each hit causes 2d8 force damage and will knock the target down.

Gout of Flame
A cone of fire blasts from the Watcher's mouth, incinerating everything in the 30' cone for 3d8 (save vs dragon breath for half damage).