Here is an updated map of the surface of the Black City using letters for all of the major surface features - some represent special encounter areas, some are sealed/warded buildings that have survived unscathed. 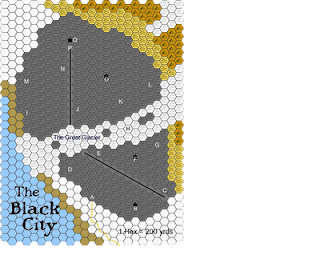 Here's the area map for the first sub level below the city, The Transit Tunnels. 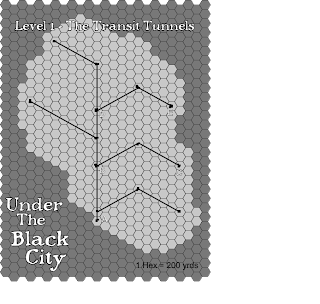 The tunnels are a network of large corridors (think subways) with different access points to the frozen ruins up above.  The nodes represent clusters of rooms and passages accessible from the tunnels.  The following lettered areas have small dungeon maps (15-30 rooms each) prepared on graph paper:

"Megadungeon" can mean many things, and in the case of this first level, it's an expansive sequence of tunnels leading to small modular dungeons of 15-30 rooms where it's easy to plug in new mini dungeons whenever a new tunnel is found, cleared, or otherwise added (for instance, only 5 out of 9 mini dungeons are statted out, not counting discovering new main tunnels or access ways).
Posted by John Arendt at 10:27 AM