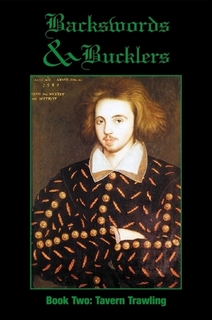 Backswords & Bucklers is a variant off of the Swords &Wizardry Whitebox set put together by Tied to a Kite Games (you can get books 1 and 2 from Lulu).  The basic rules are free, and book 2 is less than $2 (pdfs).  It covers taking the basic Swords & Wizardry game and using it to play rogues, scoundrels and ruffians in Elizabethan England.  I got a recommendation to check it out the other day (thanks Von! - brilliant) as a low magic rules & setting, and liked it quite a lot.

The default classes are fighting man, scoundrel, and wise woman/cunning man.  There are no spell-casting classes just yet (the wise class uses a bit of dowsing and herbalism to achieve some game effects).  Equipment and money are Elizabethan.  There are some tweaks to combat - missiles and firearms are very deadly, and there's a neat rule around zero hit points and dying that makes rapiers and puncture weapons deadlier that could be worth pulling into any D&D game as a house rule.

However, the strength of the two products is in providing a campaign framework and advice for running urban D&D style adventures in lieu of dungeon delves.  Their term is "Tavern Trawling", and it's introduced in the first rules book but developed further in book 2.  The idea is to build a tavern environment as the home base, replete with regulars, occasional visitors, and patrons, and use the urban landscape for missions that take the place of dungeon delves.  It's very episodic and would feel quite a bit like a TV show in terms of ensemble cast and narrative structure.  Characters hail from the lower echelon of society, and the missions, adventures, and fictional interludes are in the picaresque vein, more like the fiasco situations that spiral out of control in a Tarantino film than the grand moments of high fantasy.

Here's why I went bizonkers over these books and wanted to do an immediate review - the techniques presented for generating the taverns and patron situations are very toolboxy and could be used in a wide range of settings for brainstorming urban adventures.  I could easily transplant the suggestions to any D&D game where there's the potential for city adventuring.  I'll definitely return back to this product sometime after the Black City, when I work on that future low magic/horror themed sandbox.  And for folks wanting to use the books to run their own Elizabethan urban crawl as is, there are like 12 scenarios in outline form and a full blown adventure ready to go.  The ratio of value-to-cost is really high and I'd recommend checking it out.

Note:  let me state the obvious - I'm aware of the Vornheim product, it's sitting in my "to-read" queue.  I realize the marketing has said it's designed for urban crawling, so it'll be interesting to compare and contrast the tavern-trawling structure when I get to it...