Goblins of the Spanish Main 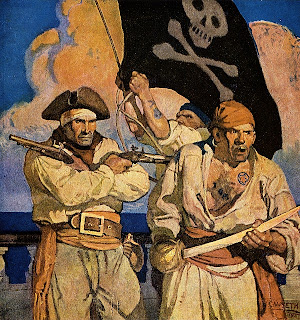 Yesterday, I was suggesting some elements that are core to D&D that need to be addressed by the campaign setting.  The more of these elements that work in the setting "as is", the better is the fit between the setting idea and D&D; the closer it is to a core D&D experience.  Just to try it out, I thought I'd come up with a random half-baked idea and see how it tests as a D&D setting.

Yo Ho, me hearties!  Let's set sail for a fantastic version of the Gulf of Mexico and trawl the waters of the Spanish Main during the golden age of piracy - buried treasure, bottles of rum, and 15 men on a dead man's chest.  And monsters.

First up, dungeons and adventure sites.  How could you handle dungeons in a "saltbox"?  Exploring a wild stretch of sea, it's got to be sprinkled with islands.  Each island could be a simple hex crawl.  You could arrange the islands by distance, such that the furthest islands are more dangerous - a bit like dungeon levels.  Some of the islands themselves could have a few simple ruins on them, or basic sea caves.  You're not going to have anything quite like a traditional dungeon, though you could have ancient Atlantean ruins or something similar.

I don't see any problems using the following D&D tropes on the Spanish Main - classes, levels, alignment, high magic, and XP for gold.  One could even place demi-humans back in folkloric Europe and have the odd halfling, dwarf or elf in a crew.

It's not hard to imagine populating the mythic Caribbean with various monsters from the bestiaries, both sea monsters of nautical lore and monsters appropriate for the tropics.  A dinosaur-filled "lost world" like the Isle of Dread seems de rigueur.  What about two-legged opponents?  There'd be no end of foreign nationals, opposing pirates and buccaneers, or hostile natives that could be found on the islands - assuming you want to stay away from using traditional D&D-style humanoids.

If you cared about "domain level play", what would the end-game be like here?  Maybe mid-level to high-level characters buy their own ships instead of building castles.  I seem to recall Pirate Lords are like 11th level fighters in the Expert set, so you could adapt the end-game to a maritime milieu.

Actually, the biggest issue I see in adapting the tropes of the D&D campaign to such a setting is the fact that those NPC ships are commanded by high level characters!

The party is the unit of autonomy and exploration in the dungeon, and the idea behind the setting needs to support these small groups of picaresque adventurers setting out to scrabble for loot.  It's a bit hard to plan your own capers when you're on board a ship commanded by someone else.  This could be a fatal flaw.

Maybe the adventuring "unit" in such a campaign would be the longboat - just large enough for the players, their gear, and retainers, and once they get to shore they're on their own to plan and explore.  From that perspective, the ship becomes the local "town", the place the adventurers return to drink some rum, hear rumors, and plan their next expedition.  A tidy sum of loot is "taxed" back to the captain.

That's a potential solution - still doesn't provide a satisfactory solution for piloting the ship and crew from place to place, or how combat on the high seas would work when the players are a small group of pirates on a much larger ship.  I've got to think about it some more - the list was skewed towards mechanical elements and adherence to a core D&D experience, but there clearly needs to be some things on the list that address these non-mechanical concerns, like the importance of planning, autonomy, and small group play in the setting.  Playing the role of minions at the whim of a high level NPC is not a great recipe for D&D.

Email ThisBlogThis!Share to TwitterShare to FacebookShare to Pinterest
Labels: Goblins of the Spanish Main, The Junkyard