Thanks all that have voted so far on the setting concepts poll over there in the right column.  So far the Harrow Home Manor idea and the Library of De La Torre idea are leading the way.  So the natural thought is, how easy would it be to combine the ideas? 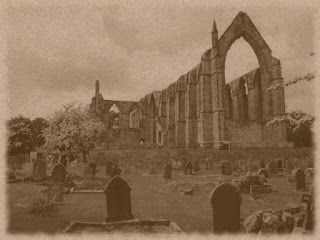 One of the interesting historical bits about the Yorkshire area in the real world is that there are many ruined abbeys and priories around the moors.  The ruins date back to an event related to the rise of the Anglican Church called the Dissolution of the Monasteries.  In the 1530's, word went out throughout England that monasteries devoted to Catholic orders were banned; the monks were told to convert, retire, or in cases where they rebelled or resisted, were executed or imprisoned.  The monasteries were sacked and stripped, the land was sold off, the libraries were burnt.

I developed a history for the site of Harrow Home Manor that traces the use of the site from pre-Celtic times all the way through the 'modern' day (1620's), identifying how the site changed hands from Celts to Romans, Saxons to Vikings, Normans to Tudors, and so on.  The site has been home to a chapel and church at multiple times during its two thousand year history.

The prevalence of churches and monasteries around the edges of the moorland attests to the existence of an ancient, slumbering evil that called for vigilance amongst a secretive order of clergy that understood the threat, and kept records and histories.  With the Dissolution of the Monasteries, the official cover for this secretive order, as regular Cistercians, was stripped away, and a few of the monks barely escaped with whatever records or accounts they could manage before the long arm of the king tossed the rest onto the flames.

Or to come at it another way:  now it's the year 1620, at a tavern in one of the growing trade towns like Scarborough or Pickering.  A local merchant recently bought a property and discovered a store of scrolls and illuminated texts hidden in a secret cellar chamber, describing a mysterious order of monks from 80 years prior (the Ordo Fratrum Advigilo*) that warned of a sleeping evil beneath the moorlands, and documents note the various places where they had discovered entrances  and caves leading into the miasmic depths.  Never mind the superstitious claptrap, says the merchant, the texts describe treasure brought into the depths in bygone ages!  Celtic torques, Roman standards, Viking hacksilver, crusader gold!  As the merchant sits across the tavern table from you, he offers a deal:  he'll grant access to the secret library he now owns, and will provide a bit of funding towards adventuring gear and equipment, in return for a cut of the treasure.

Voila!  It combines the info-dump and target-rich opportunities of the Library of de la Torre, and the small micro-sandbox and tightly themed gothic megadungeon of Harrow Home Manor.  As I think through the implications, I'm imagining this adventure would be much more "handout intensive" like a traditional Cthulhu investigation rather than your standard dungeon, merging some of the best parts of both experiences.  Who was that monk who stashed the collection of rare scrolls 80 years ago during the chaos of the Dissolution, and are there any other secretive members of the Ordo still lurking about, watching for signs and portents?  The theme of "vigilant watchers for the return of evil" even has echoes of Tolkien, or D&D standards like the Temple of Elemental Evil and the villages of Hommlet and Nulb.

*If anyone out there is good with Latin, I'd appreciate any correction to the name for the order - it should be something like the Order of Watchful Brothers or some such, only in proper Latin.