Lessons of the Black City

Today you get some cool maps!  Following yesterday's topic around running an effective megadungeon or sandbox game, I promised some reflections on the Black City campaign so far.  Let's talk about information, first.

When players arrived on Thule, they got a brief introduction, akin to what was posted here (the italics section, on starting out on board The Isgerd's Fury).  That kind of "new arrival orientation speech" gave them enough information to decide to head to Trade Town, do some rumor gathering, visit the ruined city, and use the Well of Woe entrance to enter the dungeons.  Bluenose, leader of a guard detachment at the Well of Woe, has also been a regular source of information.  For instance, the players learned about 'The Killers in the Mist', one of the tougher upcoming encounters, from Bluenose, tavern rumors, and even an encounter with other adventurers, before some NPC's approached them with a job offer to take care of The Killers.  The information flow has been firing on all cylinders.

Another item that paid off in dividends was including a "subway style schematic" near the entrance.  Check out this picture: 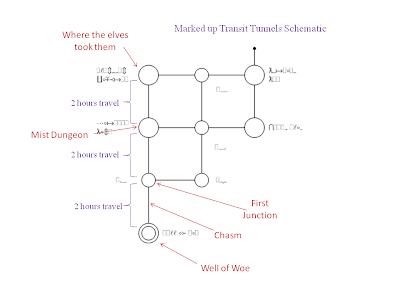 The players found the basic diagram etched into the wall immediately on entering the Well of Woe; they've since been able to verify the nodes correspond to junctions beneath the city where the major tunnels join.  Rather than fill up an endless sheet of graph paper with rooms, I felt monotony could be best avoided (for both me and them) by having smaller dungeons, geographically distinct.  I'm not a fan of endless rooms packed on a single sheet.  Yes, that means there are 9 dungeons, just on level 1 of the under city.  I put some notes on the diagram for folks reading the game reports, so you have a sense on where the Dokkalvir (evil elves) guided the party after the last game session.  The schematic has been invaluable in allowing the group to plan excursions and take control of the game.

Here's a quick peek at the Well of Woe dungeon (cleared and bypassed by the players now).  The individual dungeons represented by notes aren't exactly big, just large enough. 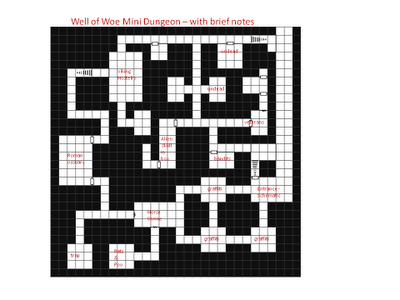 Other elements that are working well include the wide number of factions.  Other humans make up some of the more dangerous and interesting encounters, from berserkers suffering from 'Dungeon Madness', to crews from other ships (filling the BX roles of bandits, veterans, nobles, traders, and NPC parties).  That means I have some large charts, so when bandits are encountered, they're not bandits; they're ill-equipped raiders wearing black raven cloaks, using a Russian accent - they came on the ship Hugin, from the Kiev area.  And they’re trying to kill you and loot the bodies.

There have been some mild rivalries, and numerous showdowns - reaction rolls are always dicey, I am a strong proponent of randomization.  The group is starting to understand there are some monster factions, too, but for the most part, the city seems to be haunted by the living dead, mutated beasts, and strange automaton servants left by the ancients.

I'm a prophet of keeping a consistent campaign calendar and planning worldly events in advance, so the DM can continue to advance the larger world when the players get lost in dungeon time.  After last game session, where a character was restored after spending time in the fairy realm, it's a snap to look ahead at some of the events and see what dire visions were revealed by the fairy queen.  I have a piece on building a calendar here: Happy New Year, Greyhawk, if you'd like pointers, and here is an earlier list of sample events for the Black City that can happen while on the island for the summer:  Campaign Events.  It's probably best if my players skip the Campaign Events page, assuming they didn't read it in the past.

Problems
I promised problems!  The Well of Woe entrance is meant to generate resource concerns - mainly time management, but a bit of water, light, and encumbrance as well.  The players need to pay a tax to the guard detachment, to descend rope ladders through a hole in the street to enter.  That's interesting and a little different.  But the distances involved in tromping to some of the remote dungeons chew up time, encouraging longer stays in the dungeon.  This runs head-to-head with another worthy goal, which is episodic play; the players should leave the dungeon every session, so we can have a rotating cast every week.  Similarly, the chasm in the tunnel between the Well of Woe and the First Junction has encouraged the group to seek alternate entrances.

Distance also means greater opportunities for wandering monsters, though I have tweaked the frequency of checks in the larger tunnels so it's not a constant beatdown.  There's a fine balance between enough wandering monsters so the group makes meaningful decisons about when and where to search, versus too much wandering monster noise.

I took all that advice to heart around "treasure shouldn't be just another bag of coins…"  Many of the treasures the group has found have been things like rare oxide powders in huge clay jars, giant furry snake hides, or large metal boxes.  Unusual treasures, and difficult to transport.  More often than not, the group makes a note on their map, leaves the unwieldy loot for later, and continues exploration (often losing the opportunity when some other party stumbles along - "So long, and thanks for killing the monsters".).  The decision *not* to engage in logistics planning to get non-standard loot out of the dungeon is a valid choice, especially when exploration is more interesting, but the net is that we've played 9 sessions, and no one has leveled up to level 2.  A few guys are between 1,500 and 2,000xp, very close.

Furthermore, a few major treasures have been well-hidden, and were completely bypassed, making some of the levels seem poor in wealth.  I'm not a miser, really!  I still think a less even distribution, aggregated in a few larger hoards, is more interesting, but there is that risk the group misses the hoards if they're not really thorough.

Finally, I built level 1 so that it becomes more dangerous as you go north and east (with the north east dungeon really suited for level 2 characters).  However, there are easily available passages down to the next deepest level, the Warrens of Decay, a sprawling cavern system representing dungeon levels 3 and 4.  There have been a few times the unprepared group, with resource depleted 1st level guys, considered going down to check things out, nearly precipitating a tragedy.   So I've fretted about so many available entrances to the next major level, even though we'll be thankful for them when the group is ready to delve a bit deeper.

Those are my major concerns, otherwise this has been generally successful, as far as putting theory into practice.  I have asked a few times if the players are enjoying the campaign, the responses are fairly positive, and they show up the next week.  The largest player-facing complaint seems to be rules-based (preferring the higher powered default BX approach, or ACKS, to LOTFP).  We'll try the game using ACKS at some point and see how much it changes the default assumptions - I'm working with ACKS as I work on the next big thing, the Spirit Island setting (a feudal Japan, warring samurai thing).