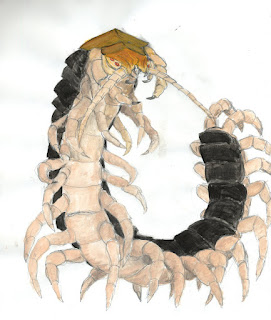 Mukade was a gigantic centipede monster living under the bridge Tschitta, in Totomi.  It was said to have glowing eyes that could boil a man's blood, and venomous breath.  Mukade was dangerous enough to hunt dragons, and was eventually killed by the hero Hidesato with an arrow through an eye.

Children of Mukade are monstrous centipedes descended from the legendary demon.  They don’t fear man and frequently attack on sight.  Provincial lords pay a bounty to any hunters that return with dead Mukade, as nests of the beasts disrupt travel and can make remote bridges unusable.  This is a monster I'll eventually use in the Spirit Island campaign - and probably create a gigantic demon centipede for use in the Night Lands.

The children are 12' long monstrous centipedes, with red legs, a green body, and red head and mandibles.  They are extremely swift, quickly attacking from beneath a bridge or ruined habitation.  Their virulent poison is strong enough to kill a man. 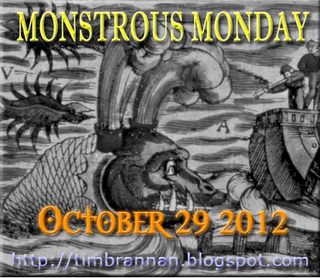 The image is from an interpretation of Mukade by Arta01 over on deviant art.