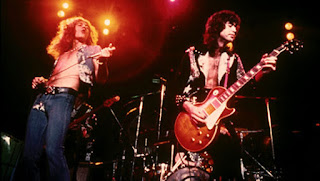 The title of this week's post came from the players.  There was this moment where the group solved a puzzle room, unlocking a piece of the floor that rose towards the ceiling, revealing  a circular hidden chamber that lifted from below the ground.  There was a bright light that made it hard to see what was surfacing, and one of the players quickly blurted out - "Wouldn't it be cool if it was a stage and Led Zeppelin was down in the hole and they just started wailing on guitars?"  Which was followed by, "The aliens have been keeping Jimmy Page in a fridge", "Woohoo, Led Zeppelin rocks the Black City", that kind of stuff, and then one of the kids jumps up playing air guitar and sings, Been dazed and confused for so long it's not true…

The problem is whatever was actually in the hidden room isn't nearly as awesome as Led Zeppelin would be in the dungeon.  Hindsight is 20/20.  :sigh:  What they actually found was a dazzling crystal that gave off eternal light, and a few slabs of raw adamant, the hardest metal in the universe.  Good finds, just not as cool as an impromptu Zeppelin concert.

As a design conceit,  though,  it'd be pretty fun to make an entire level secretly themed after Zeppelin songs… they'd encounter the dazed and confused maze; the black dog guarding the houses of the holy; a chance to sit with elders of the gentle race; meeting the lady whose sure all that glitters is gold, and so on.  I have strong memories associating D&D with Led Zeppelin and the animated The Hobbit, having discovered all three around the same period in the late 70's, right about the time Space Invaders showed up in the arcades.  Don’t forget the black light posters, either.

Enough of this rambling on, it's time to sing my song, or at least get on with the game report.

Where play ended last week, the group had raised an elevator from the far deeps, and it dredged a huge pile of corpses (crawling with giant beetles) up to their level.  They smashed the beetles last week, but one of the corpses they actually wanted - the leader of the explorers, their nemesis Galm - wasn't on the platform.  They ended up using ropes to send Vitaly the Russian Elf all the way down to the cavern floor to look for Galm's body.

I'm bringing this up because it totally highlights the fickleness of player choice.  First, they had an elevator - I'm not sure why they thought tying a guy into a harness and lowering him on a rope was better than sending him down the elevator, armed and ready.  Second - everyone was afraid that the ghostly devil wasp that had infested Galm's brain would be hanging around down there, so anyone going down might be possessed, but that didn't stop the player.  Third - they've been dumping corpses into the hole for a while, and apparently the corpse pile was attracting giant insect scavengers down there, so this had a good chance of being a suicide mission.  Fourth - they could have actually looted Galm last week, but were afraid of disturbing the devil wasp hiding in his skull, so that's why his sleeping body was pushed into the void in the first place without first searching it.

Apparently none of those risks matter when (potential) treasure is involved, and rational decisions made in the cold light of clarity last week, are quickly shelved by gold-colored treasure-goggles this week.

So that's how you get a 1st level elf tied into a harness and lowered like a human sacrifice into the stygian deeps, to scavenge for Galm's broken corpse and loot his pockets amongst the mushroom forest of the caverns.  The elf didn't die, Galm's body did in fact have treasure, and the devil wasp didn't seem to be around.  I let the dice decide, and they chose, "the Russian Elf lives".  Plus, the party got a firsthand peek at the glories that wait below the Transit Tunnels.

The rest of the night was spent far to the north of the Mist Dungeon - the group traveled hours through the Transit Tunnels, returning to the Adamant Dungeon to start exploring someplace new.  By the way, I don't name these things "Mist Dungeon" or "Adamant Dungeon" - I have far more prosaic names in my notes for them, but the players made up these names themselves.  Some Dokkalvir in a previous session left behind a map with the word "adamant" scrawled on it, and that's how this northern dungeon got its name.

The eastern section of the Adamant Dungeon consisted of numerous rooms with alien machinery and tools, including that neat puzzle room that unlocked the glowing crystal and slabs of unbreakable adamant which I discussed in the open.  Alas, it did not have Led Zeppelin.

There was quite a bit of fighting as well.  They awoke a nest of Morlocks, which attacked them in wave after wave; it turned into one of those tactical, desperate fights where front rank fighters were getting knocked down, withdrew to the back, and fresh combatants moved forward, while clerics tried to keep the fighters on their feet and magic users tossed Sleep spells.  Meanwhile, the group moved inexorably forward towards the heart of the nest.  There were like 18-20 Morlocks in the nest; they used massive two-handed war picks, doing double damage on a charge, and it was amazing no one in the party truly died.

The other big fight of the evening involved a pair of hulking, mutated cannibals.  The group has long suspected that some folks in the dungeon get infected with "dungeon madness" and turn into berkserkers, with bulging veins and bloodshot eyes.  These two guys were like berserkers that had grown into 7' tall raging cannibals.  They dropped one of these big lugs early in the fight, then used a Charm Person to confuse the other, but the unreality of having a Russian Elf as a 'close friend' was too much for the magic, and the ogre-sized berserker eventually made his saving throw.  Once he broke free of the spell, the monster immediately bashed the elf's skull into the rock wall and renewed hostilities.

They dropped him quickly, but now their elf is in a coma.  Before he went bizonkers, the big cannibal gave them an idea on where they could find a treasure room guarded by a flock of buzzing air leeches, so the party retreated to rest and prepare for next week's adventure.

See you next week, when we return to these men that come from the land of the ice and snow, from the midnight sun where the hot springs flow.

Plus 3 unnamed L0 sailors to help carry tents and supplies


*The image is from The Song Remains the Same, the excellent Led Zeppelin concert movie.  Apologies all around for my awful use of Zeppelin song names throughout this post.