The DM Has a Big Mouth

Let me ask you if you have this problem, too.  The party just got pasted by a monster, they run out of there dragging their dead companions and cursing the unfairness of gaming, the session wraps for the night, and you mouth off about all the things they forgot.  "You didn't even have to fight the Elemental.  What's-his -name has the Protection from Evil 10' radius spell and you guys could have hedged it out and moon-walked across that room…"

If I have a fatal flaw as a DM, it's giving the players the DM's perspective after their failures and not letting them figure this stuff out for themselves through head banging, frustration, and trial and error.  It's one thing doing an after action review with some newbies, but I'm always blabbing my mouth off about play refinements, even with the seasoned vets. 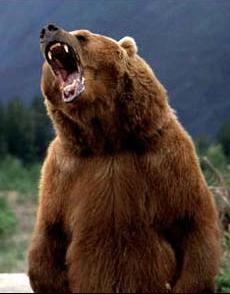 Case in point from the other night, and this one came back to get me.  The party was making camp in a stand of evergreens (they're way up in the mountains) and their ranger scouts noticed a small group of grizzly bears come down out of the opposite trees and start splashing in the river that split the valley.  Then one of the bears rises on it's haunches, sniffing the air.  Did it smell their horses, or the cooking meat?

The druid goes out there with a sack of food, cautiously uses Speak with Animals, ends up convincing the bears to be on their way, after giving them a few weeks worth of rations to drag off.

So they're camping later that night, and I snicker, "Good thing you didn't remember you took Animal Friendship…"  That's the spell that lets druids turn an animal into a permanent companion.   The gears started turning in the minds of the players… could they afford to miss a day of travel, and have the rangers and druid double back and track the bears, so the druid could attempt Animal Friendship?  Dang it!  By the next night, the druid was working on teaching his new bear companion some tricks, after burning a few Speak with Animals and Charm Mammal spells out in the wilds.

In all truth, this was a fine turn of events for the players, the druid guy loves his new animal companion - "I have a bear!" - the players laugh during Speak with Animals when the bear talks like the Yogi Bear cartoon character, and seeing a grizzly bear maul hobgoblins later in the session was entertaining all around.

But seriously, I need to learn to shut the hell up!