Vacationing at the Lake of Hali - A Carcosa Review 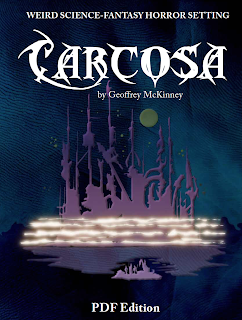 Carcosa is a 143 page PDF published by Lamentations of the Flame Princess; it's a setting that describes the forsaken planet of Carcosa and the Lake of Hali (the names of both locations hail from the Cthulhu Mythos and the Lovecraft circle of writers).  I had the chance to read the PDF version of Carcosa over the holidays.  The physical book is still on the way.

The PDF is nice looking and functional; the two-facing pages read very well on an iPad and the hyperlinks let you zoom all over the place.  As a publisher, LOTFP is distancing itself from the hobbyist side of the OSR by turning out progressively more polished products.

The artwork in Carcosa is amazing and it's a joy leafing through and soaking up the pictures.  Every piece is done by the same artist and he did a great job with all of the Lovecraftian horrors and scenes of high tech carnage.

So what is Carcosa like?  It's a singular piece of fevered imagination that brings me back to flipping through Heavy Metal magazine and gazing at Omni covers at my cousin's place down the street when I was a kid.  Carcosa is what happens when your Call of Cthulhu investigators fail to stop the return of the Great Old Ones, and the world is plunged into horror and madness.  Failure is an option, and that option looks like Carcosa.

The setting describes a distant planet ruled by the Great Old Ones of the Cthulhu Mythos, where humanity is the bottom of a food chain that includes alien horrors, ancient serpent men, elder gods, mad robots, and cyborgs.  Humanity is hopelessly fractured into different colored races of man, and the monstrous sorcery used by the inhuman sorcerers of Carcosa uses men as components in horrible rituals.  It's a bleak setting ideal for horror gaming or adventure gaming with lots of horror elements.

What I Liked
Carcosa thrusts difficult ethical choices into the foreground, and if your table enjoys mature discussions on that level, you'll enjoy Carcosa.  Standard D&D type gaming allows players to happily stab the orcs, goblins, and kobolds in the face and loot the bodies;  moral dilemmas in the dungeon can be minimized by distinctions of race and alignment.  Carcosa removes the distinctions; there are two types of opponents - other humans, on the one hand, and all the inhuman aliens and Great Old Ones on the other.  Carcosa's approach to humanity reminds me of ER Eddison's The Worm Ouroborus, where the different races of humans are called Goblins, Demons, Ghouls, and so on, living in Demonland or Goblinland, but they're all people nonetheless.  The names are just labels.  I could probably write a lengthy post on how Carcosa's use of color generates such interesting questions - it's like the Trek episode with the black and white faced guys who hate each other irrationally - only on Carcosa, it's the whole planet.

The other element that creates ethical  problems on Carcosa is the sorcery.  The recommended magic system for the setting uses ritual magic to conjure, bind, banish, imprison, or torment various eldritch entities.  It's reminiscent of the magic system of Call of Cthulhu, where a player needs to think long and hard before choosing to learn and use magic because of the costs.  On Carcosa, all rituals require human sacrifice.  If you enjoy the high drama of Faustian bargains and deciding when the ends justify the means, this is for you.

Beyond those two points, there are lots of neat little mechanical items to recommend Carcosa.  There's a hex crawl that covers 400 hexes (2 encounters per hex) - 800 encounters.  That's a lot of coverage.  There are tons of new monsters, stats for all the Great Old Ones, rules for psionics, robots, cyborgs, and plenty of artifacts.  I can see many of the artifacts making it into my own campaigns immediately.

Issues
I have some issues with the material that I'd likely change if I were to use Carcosa as a complete setting.  First, there are a series of suggested rules that require rerolling various hit dice and damage dice at the start of each combat; even psionic talents vary from day to day.  I haven't play tested those rules, but my sense is they would create a lot of swing and reduce the player's ability to calculate and plan; a difficult foe could roll badly on their hit dice and be within the player's range, or roll well and be far tougher to beat; you wouldn't know until combat started, and that's too late to plan.

The randomness applies to players as well - the beat stick fighter could suddenly find himself with d4 hit dice.  This system would work  for horror gaming by keeping things uncertain and nerve wracking, but I'm cautious whether it's actually fun for D&D style play.  Enabling planning and calculation of resources is an important part of how I approach old school gaming.  It certainly creates a sense of uneasiness and uncertainty in a visceral, physical way, and might be okay for short forays into Carcosa.

The Great Old Ones are fairly bland in description; the barest mechanics and damage are provided, but not much about their cults or how they interact with the world.  Folks with a background in the source literature wouldn't have a problem filling in the gaps.  I'm loathe to criticize statistics for literary creations, because so much of it is taste and interpretation; I see enough of that fanboy grief in the Heroclix world (I can't believe Superman can beat the Hulk!).  I didn't agree with a lot of the stats in Realms of Crawling Chaos, either.

Will I Use Carcosa?
Absolutely!  I can say with total certainty that Carcosa becomes one of those places a party can accidentally end up by going through the wrong dimensional gate, and be forced to trek around the hex map trying to figure out a way back to their world.  Carcosa is that doomed dimension, just out of phase with our world, a sign of things to come if the Old Ones aren't stopped from gaining a foothold here, and plunging the world into madness.  There's too much awesome stuff in the book.  But I find the setting a bit too bleak to imagine running a campaign 100% start and finish in Carcosa.

Despite some quibbles, it's a 5 out of 5 on the Beedometer - the scope is far beyond anything I'd home brew, and the presentation, art, and quality of the PDF advances the state of OSR publishing.  Looking forward to seeing the actual book.

Now that the holidays are behind us, the finances should level out and I can make some more gaming purchases.  I'll be doing some upcoming reviews of Anomalous Subsurface Environment, and Book of War, and hope to pick up Weird Adventures and some of the latest S&W/Frog God stuff in the coming weeks.
Posted by John Arendt at 11:54 AM