You may note how from time to time I climb to the top of the soapbox and proclaim great things about classic D&D, the BX sets, the Known World of Mystara.  But I tend to be curiously silent about the Mentzer editions that dominated the classic D&D line after 1983.  No longer!  You shall know the truth.

It goes like this:  Mentzer D&D,  BECMI, is the greatest series of D&D sets... that I shall never play again.  BECMI, incidentally, comes from Basic, Expert, Companion, Master, Immortal - BECMI. 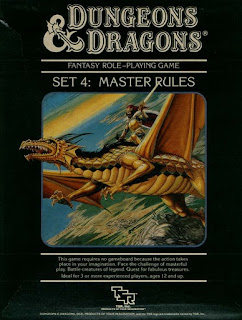 The reasoning is pretty simple.  36 levels is just way too much room to advance.  There is absolutely no way I'll stick with a campaign long enough for a group to get a fraction of the way, and when I stand at the base of the Mentzer Mountain, gazing longingly at the cloud-wreathed peak where the "Paths to Immortality" lead folks beyond the sky to the Immortal Playset, I turn around and say, keep your mountain, you bearded sadist.  I'm off to play a game we can actually "finish" in a few years.

So there you have it.  You've learned that I have a low attention span, but possess enough self-objectivity to recognize this monstrous flaw.  See, a few decades ago it was the opposite;  "Who wants to stop playing at level 14, like that unfinished Cook Expert set, when Mentzer lets you go all the way to level 36?  The sheer genius!"  Oh how we change.

Here's the problem - playing 3-4 times per month, our old school characters are leveling once every 3 or 4 months.  After a year and a half, our current set of guys is level 6 or so.  I've resisted the urge to nuke the campaign so far, but how long can I hold out?  My brain is exploding with ideas.  I'm always on the edge.

The thought of trying to spend 144 months (that's 12 whole years, brother) trying to get to the top of Mentzer Mountain, just to find out there's a whole series of Immortal levels to start climbing, is just too much for my comprehension.  I had to turn my back on BECMI.  When we dabbled with the 4E, with its mad-fast power-leveling, guys would level once per month, meaning that an end-to-end campaign would be about 3 years.

These days, I much prefer the achievable level curve in Moldvay-Cook's BX edition (level 1-14, even though they hinted at 36 levels).  Even with AD&D, I don't recall folks playing it after levels 10-14 - about the time they got knee-capped by The Tomb of Horrors.  Even if I didn't nuke the whole setting, I'd be ready by then to retire those characters in the campaign and start over.

That all being said, there's no greater model for what should be in WOTC's new D&D than the contents of those BECMI books.  They want modular, Frank Mentzer gave us modular.  Everyone starts out kicking doors and stabbing monsters in the face with the Basic Set; when the dungeon shtick gets old, you're ready for towns, hex crawls, and nautical jaunts in the Expert Set.  Player options, mass combat, and domain ruler ship are in the Companion Set; Artifacts, Paths to Immortality, and Planar Travel are the Master Set, and finally you have the Immortal end game.  Is that modular, evolutionary game play or what?  Oh well, what do I know?

It seems about time for a new poll.  So tell me, o wise and knowledgeable readers, what kind of level range do you like to see in your D&D games?

Email ThisBlogThis!Share to TwitterShare to FacebookShare to Pinterest
Labels: Essays on Gaming